So, a few folks asked me for a build thread on the all aluminum Jeep I am building from parts mostly sourced on Pirate.


I really liked the idea of a Jeep rod, but really want performance, not a shitty ride. I also found an all aluminum CJ2 tub here that was widened and lengthened to actually be usable.

Considering that I also had some Corvette suspension kicking around when I noodled that purchase, I pulled the trigger on it. I also found adapters for the Vette sub frames that I had, so I really wanted an all aluminum frame, welded to the tub to make it unibody... and worked with @zachv (RIP) to design an aluminum cage that's going into it.

So I had a rendering done about 2 years ago and now having changes made to that rendering, as we made some design changes.

This is closest to what we decided on:

You'll see in later pics, some of the changes.

The inspiration for this particular one is a B25 - When I thought about this, it was Memorial Day. My Grandfather flew off the Hornet and ultimately became a Squadron Commander and Navy ace. He was aboard the Hornet when Doolittle took off.

Originally, was going to ship this to JR to build, but as we all know, life throws a lot at us and it's happening in my shop instead.

The funny thing is that this has been a two year plan, with work in fits and starts, but we ended up build a 4 of these after we started this one.

Now we're back on this one, doing all the different things.

So, I will reserve a few posts, so I can catch everyone up to where this one is and if of interest, keep it going forward. 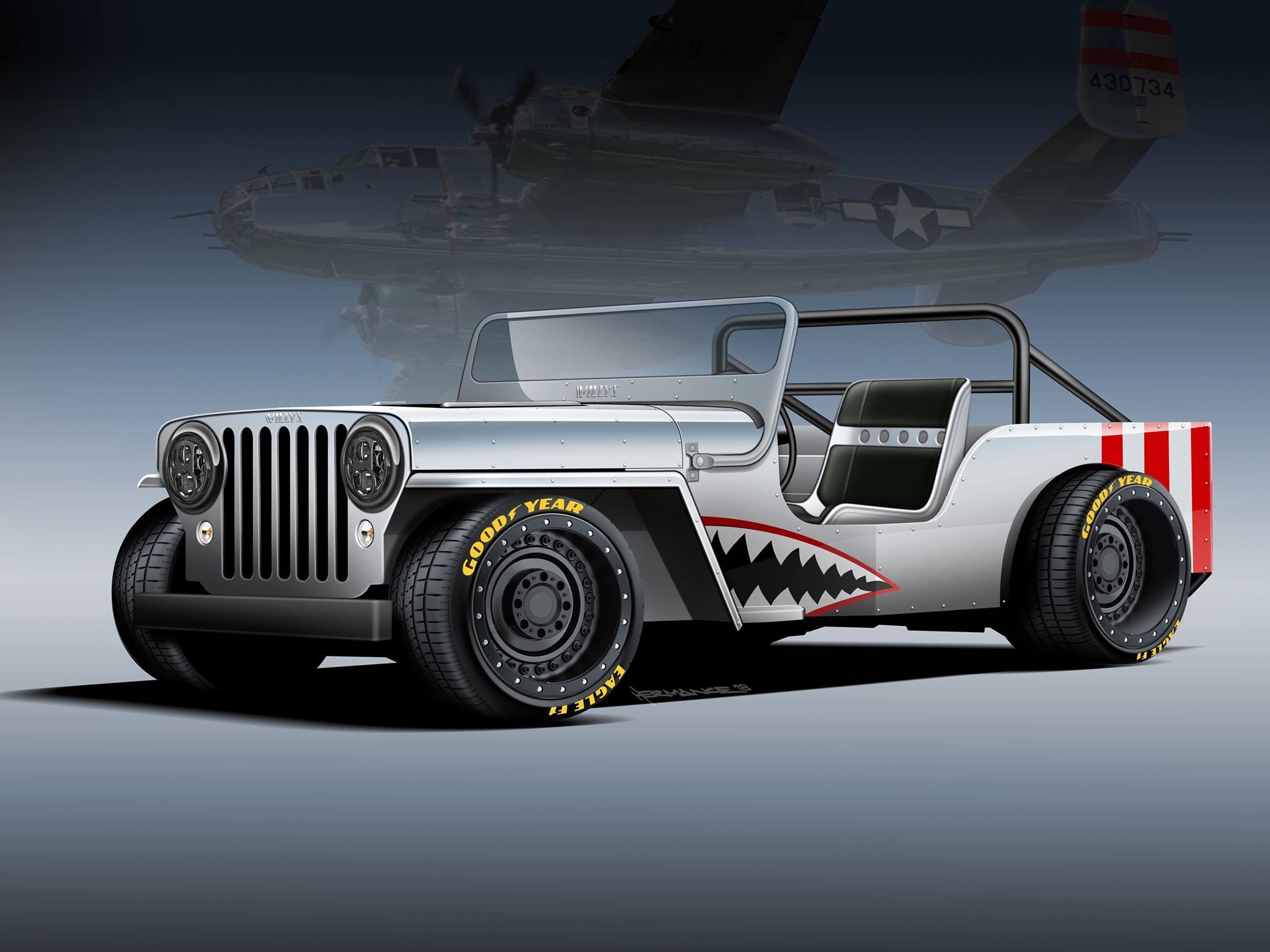 Hey look, I can edit all my posts:


So I had the suspension.... and I ordered the adapters for full corvette suspension before Wes even shipped me the body.


So, since we're running shorter than the 104.5" wheel base of the Corvette, we couldn't run the torque tube and rear mounted transmission the Vette did... and of course, I sold that stuff off years ago.. so we decided to run a 2017 Camaro rear differential and anti wheel hop shafts. We used 2011 33 spline Corvette hubs to mate up to the Camaro axle shafts and we could run the nice brakes and gain some real beef... and we can also run factory traction control that runs both the brakes and the eLSD.

At this time, I also planned to run a destroked LS2 that ended up being stolen by the engine builder (Tony Doyle in Deluth MN :mad3 and a 4L60E that I had built and sits on my floor today... there's a different engine and transmission that will be covered later... but this post is about the rear end and some of the changes we made...

So in these pics, you see mainly C5 components. Whelp, I have a C7Z06 and loved it... so I found C7 stuff to be stronger and really found a nice set of brakes for cheap. So off came all the C5 stuff and on went the C7 stuff. 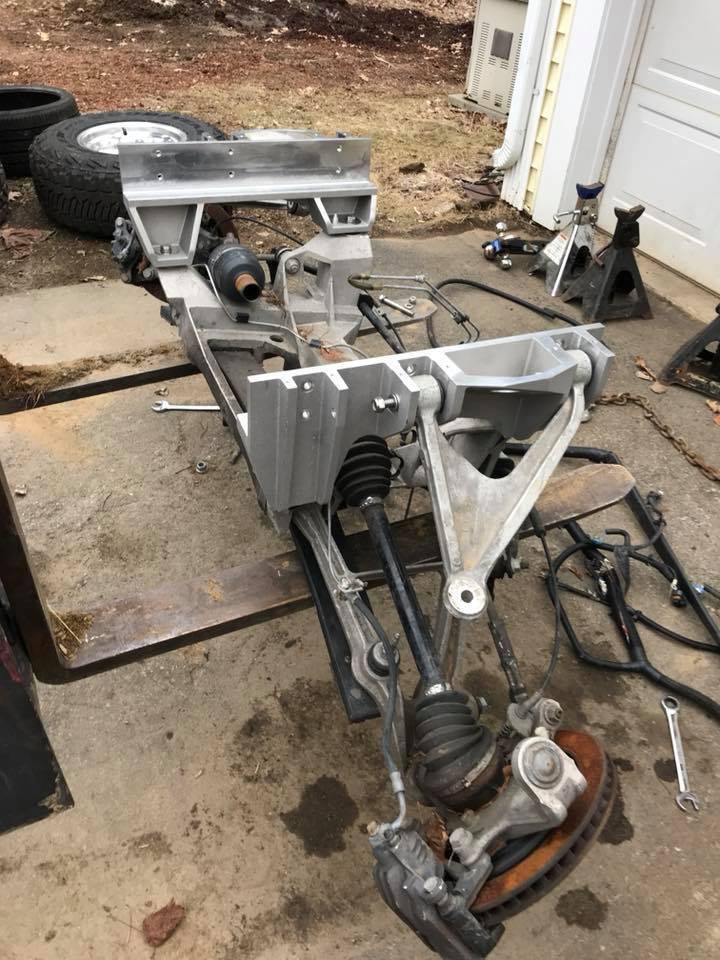 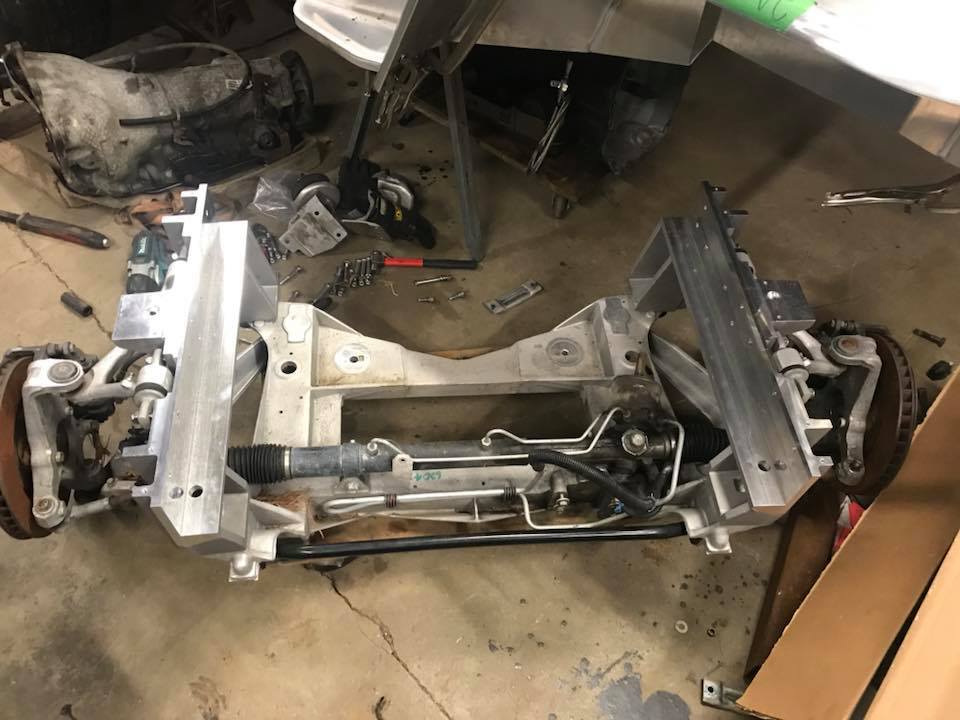 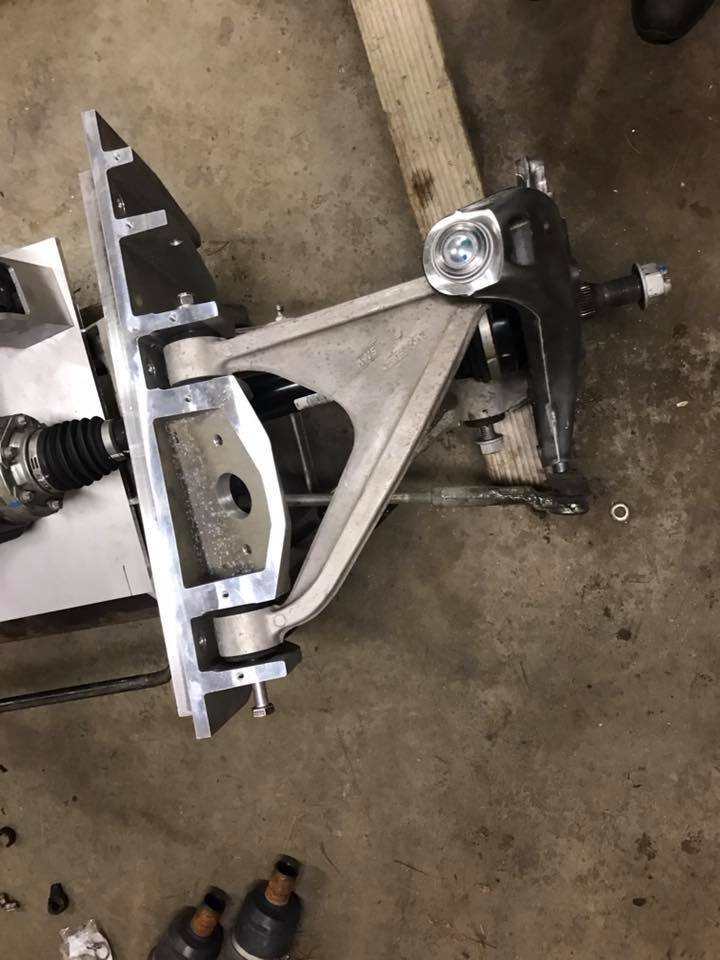 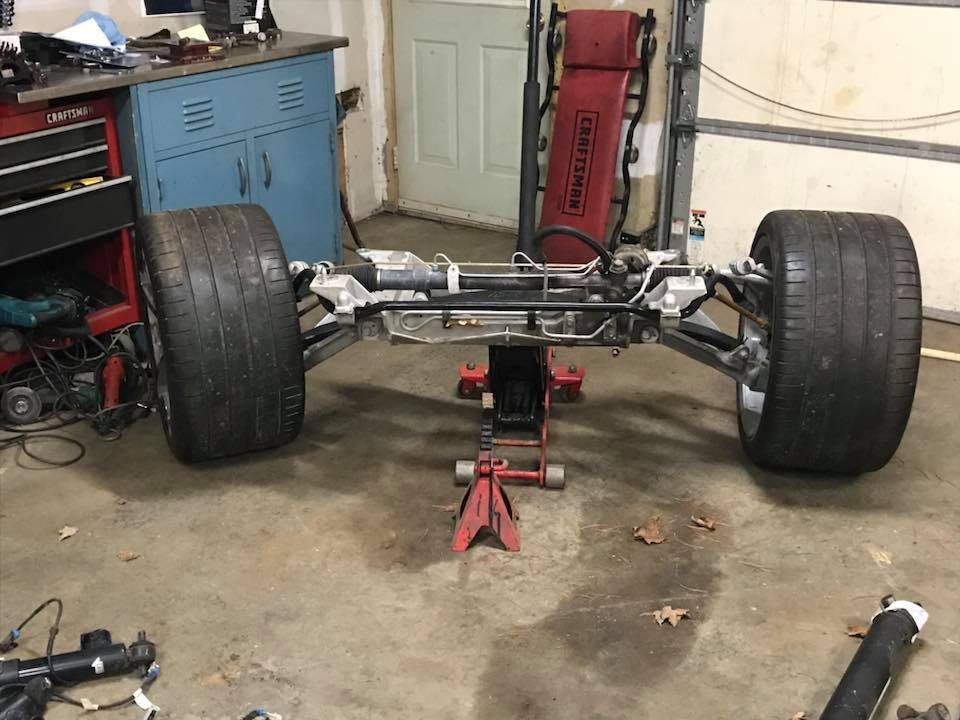 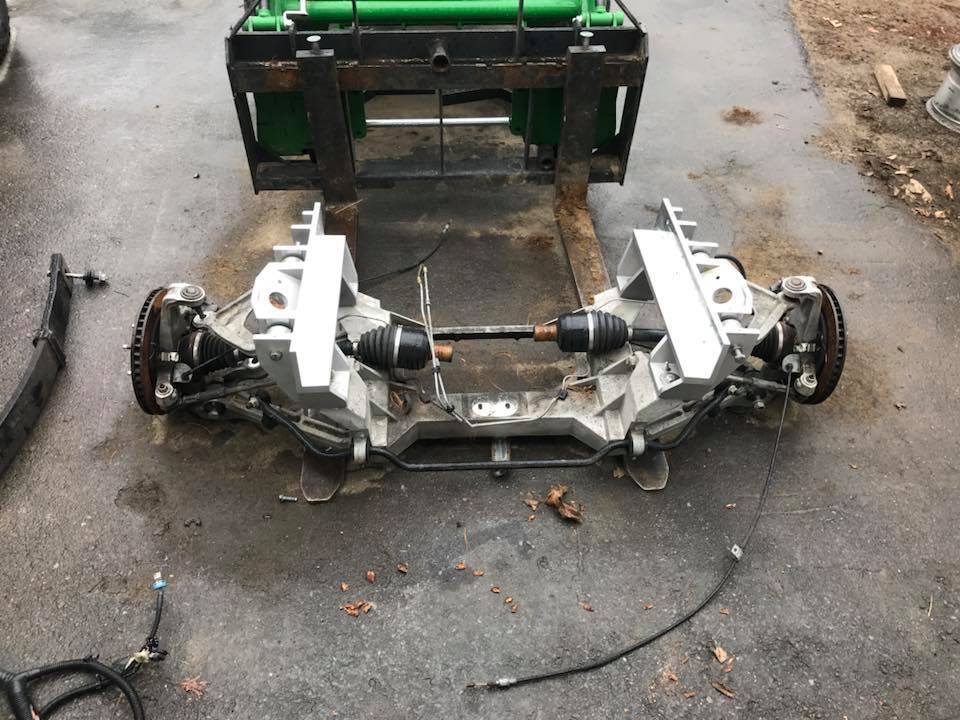 So by now, I have the body in house (this is still ages ago) and I can start noodling on how I put it all together... cradles are assembled... with C5 stuff at this point, but fuck it in 2020 we have the C7 stuff on, you guys can use the way back machine and see that we took it to my shop, instead of my garage.

As I said, original design was unibody... and fuck CAD, I can sharpie with the best. This was the prototype... the other ones we did have mandrel bent frames that get welded.

But yep, enter in some 2x4 Aluminum tube - 1/4 thick and start cutting that beautiful tub. 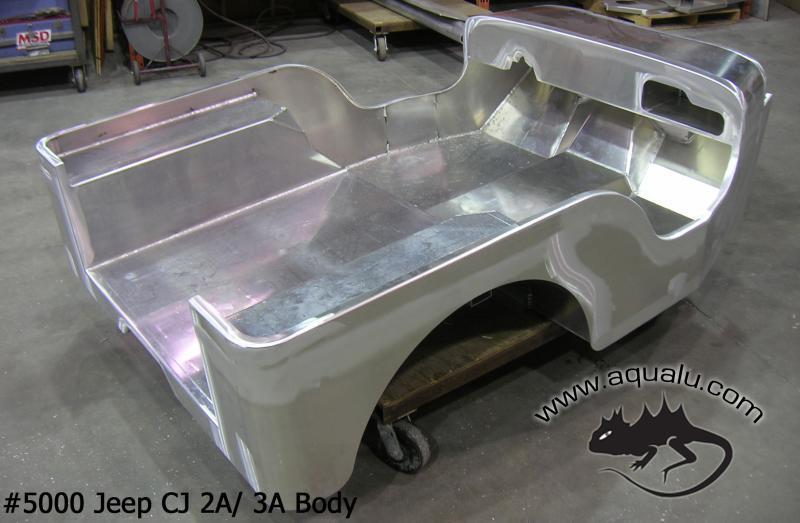 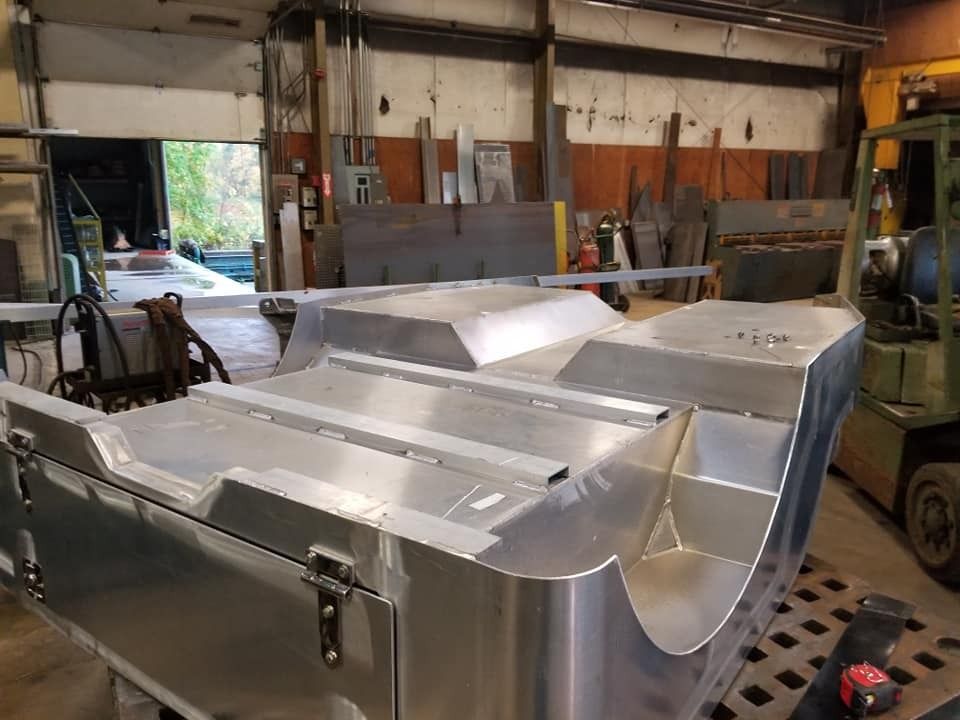 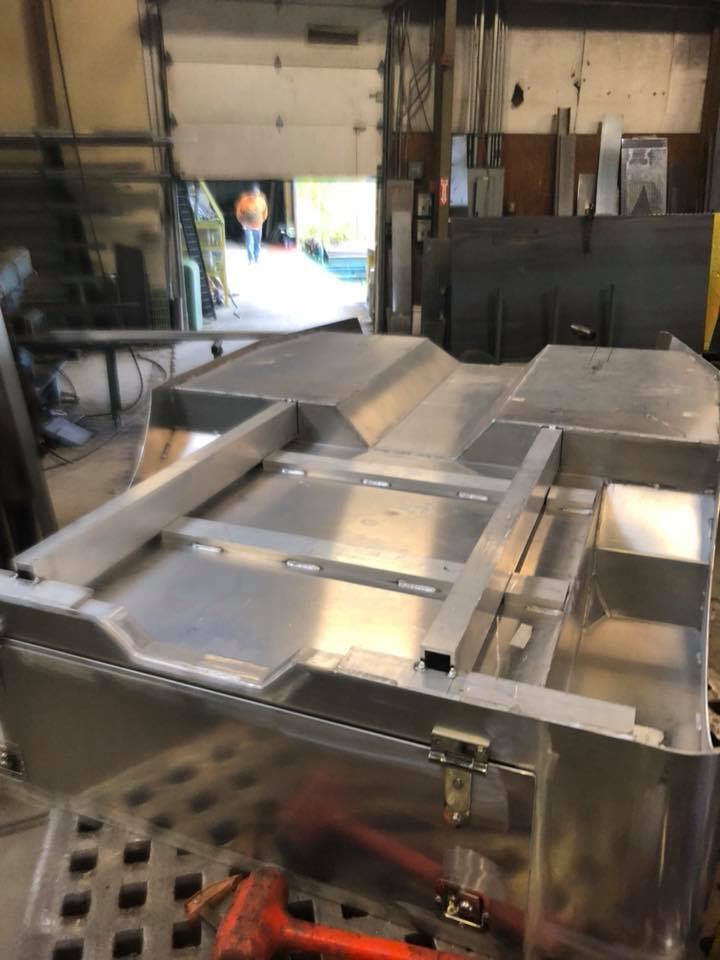 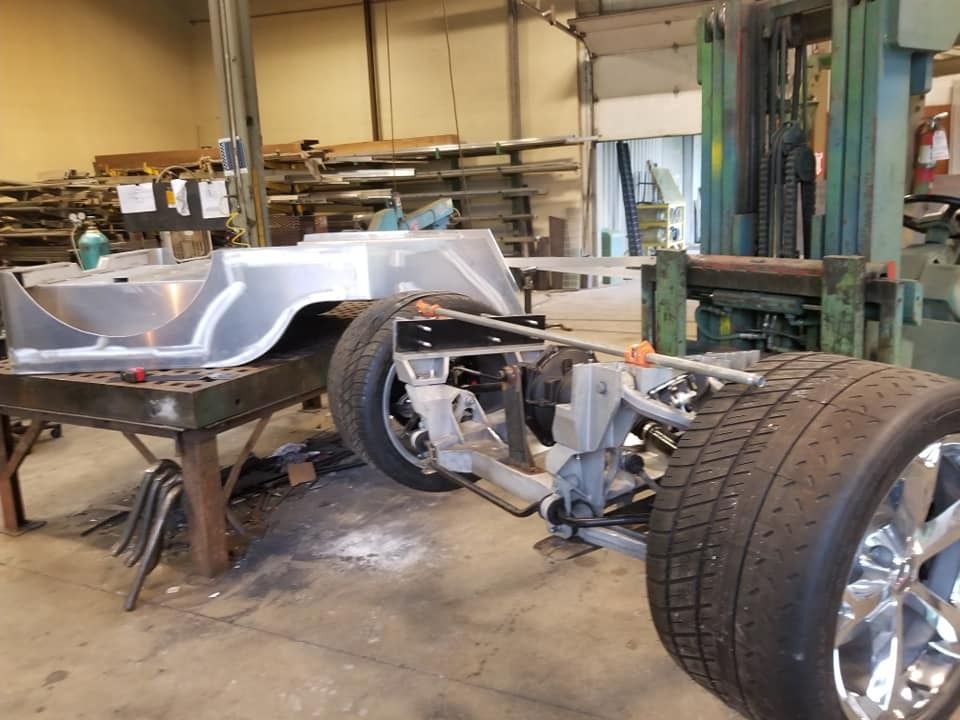 Alright, since we're not the Corvette wheel base, had to forgo the torque tube and rear mounted transmission.

We decided on a 6th gen Camaro rear diff, with it's anti hop axle shafts and fit Z06 hubs into the Z06 rear suspension with Z51 brakes.

3.90 gears, e locker controlled by the ECM and a switch and a rear differential cooler.

good for about 780hp in this chassis. 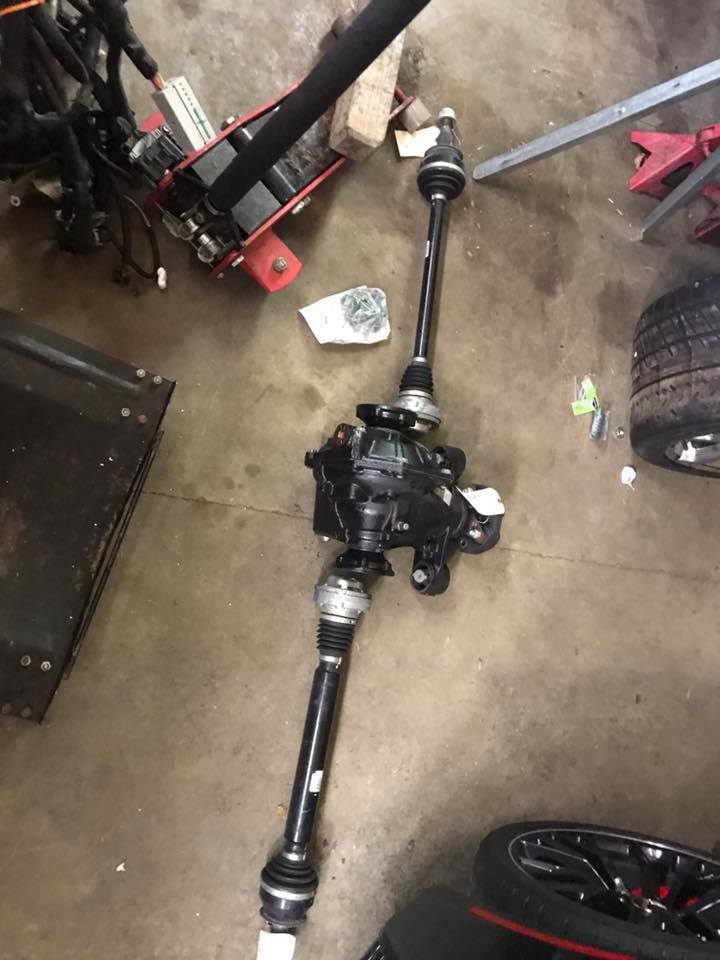 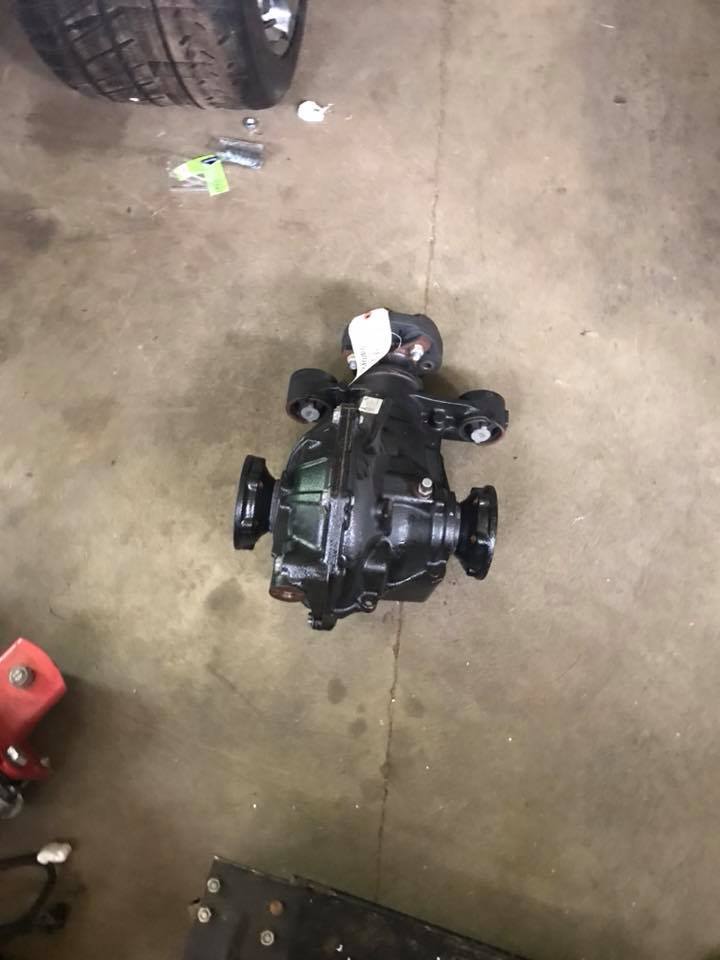 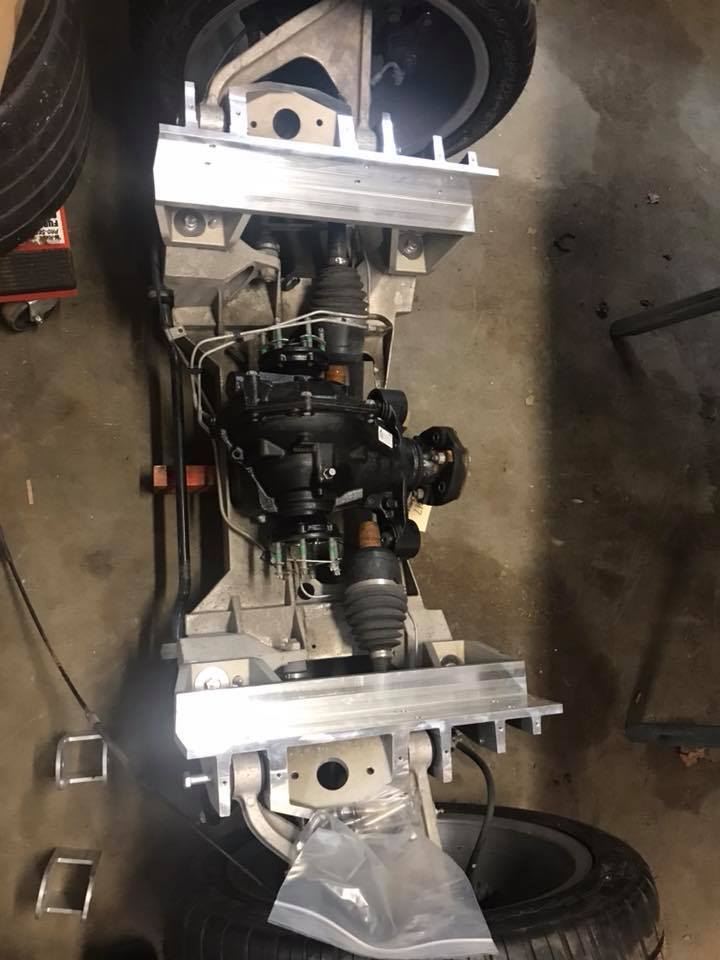 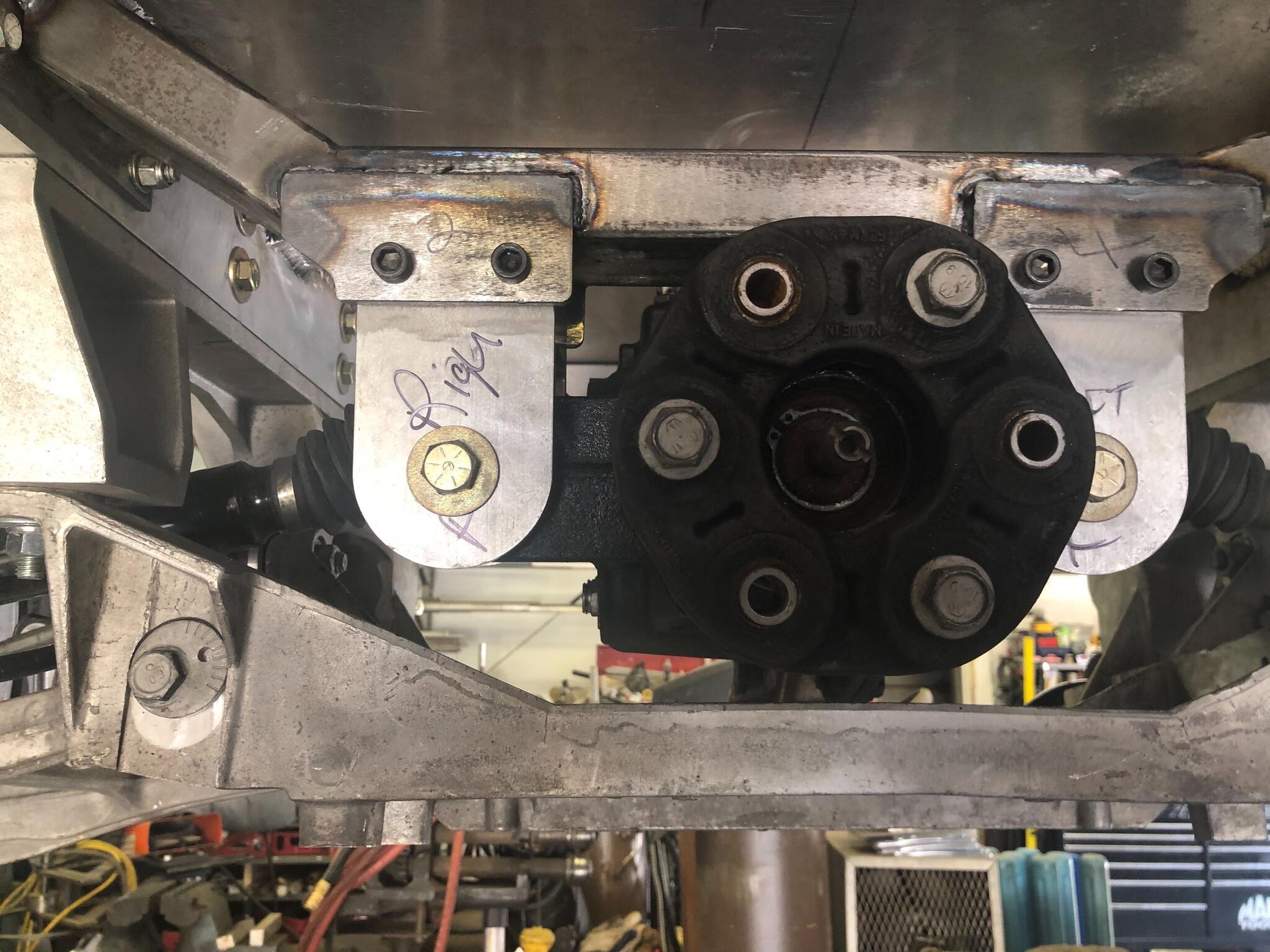 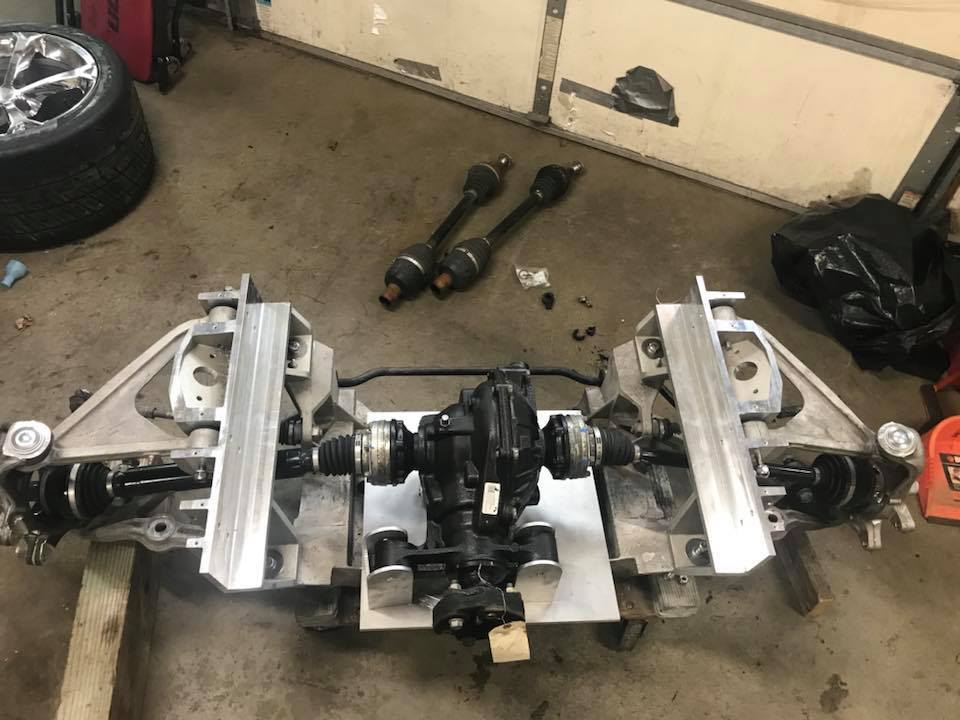 So, since this is a prototype, lots of changes... that on the old thread weren't incorporated, as we were figuring stuff out in real time.

Been building this one for about 2 years, so you're seeing pics out of band, meaning final state, not the dink around with Gen 5 arms and then switch to Gen 7 for an example.

That said, this is an all aluminum build. We made our frame rails... production cars are mandrel bent.

So we did some fine CAD again

and welded her up 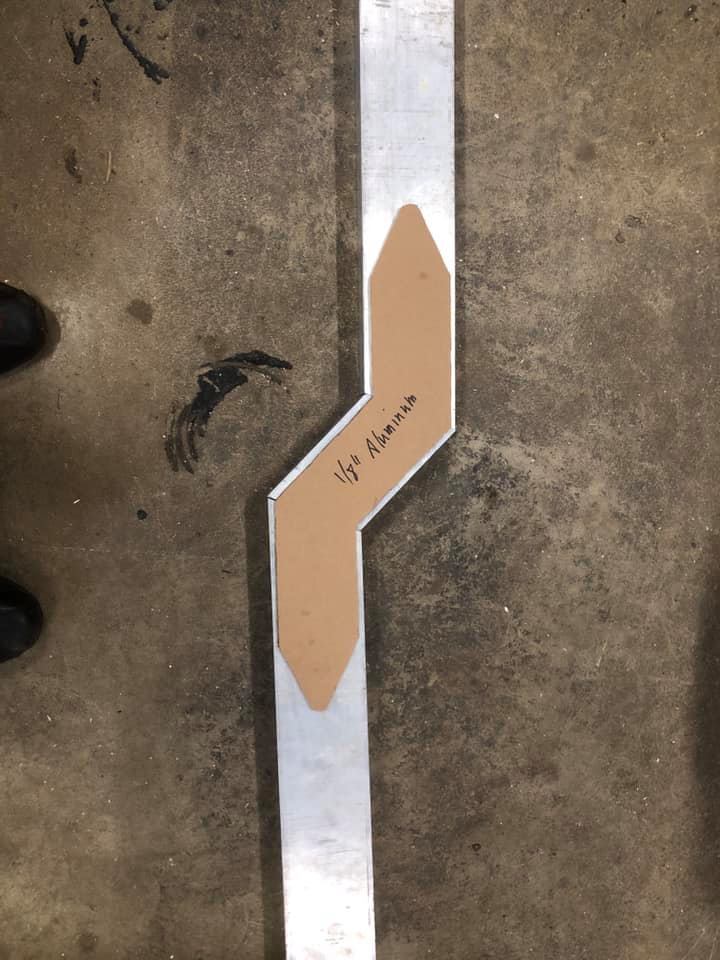 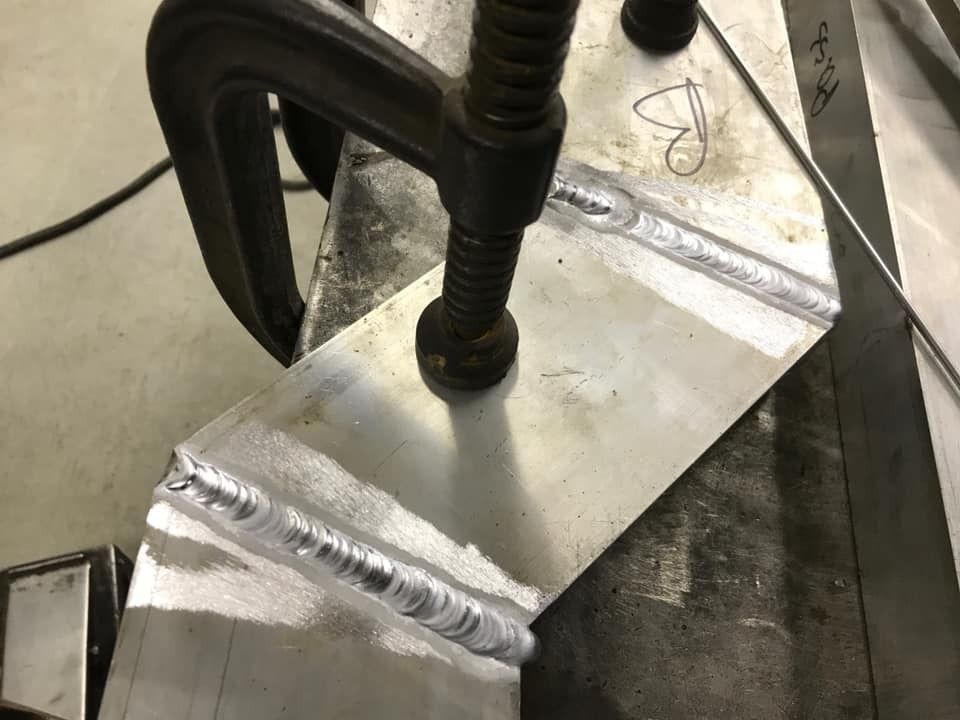 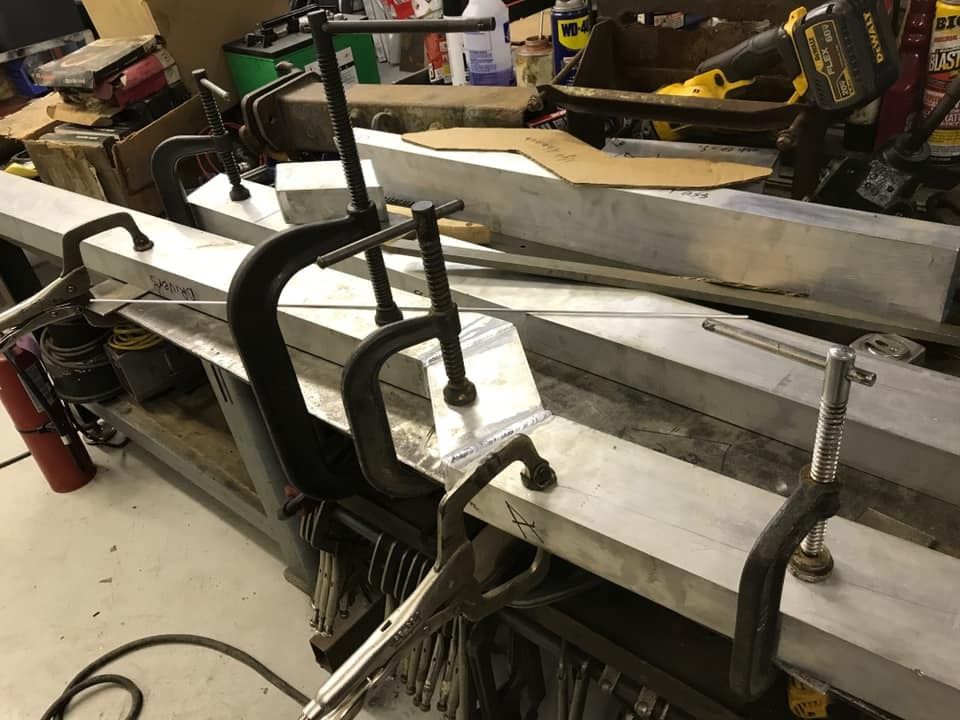 So glad we get to keep following your awesome builds

throw this thing away and go repo big ugly!!

Pics disappear for anyone else?

One pic in the first post, none of the rest will load... using Chrome on Win10 64bit if that helps...

Pics are back for me!

In less than 24 hrs? Amazing what can happen with an Admin is interested/invested in the site and the community. Cheers Austin and I'll shut my trap so Grendel can get back to documenting this build!

Adding more pics, but they're a bit out of order... will fix them eventually. Will get the thread up to where we are now over the weekend.

I have to get around to this.

I like it! Any chance you will run a fold down windshield?

Fishnbeer said:
I like it! Any chance you will run a fold down windshield?
Click to expand...

Yes, have a widened windshield by aqualu to chop.

Pic has the unchopped frame one it. 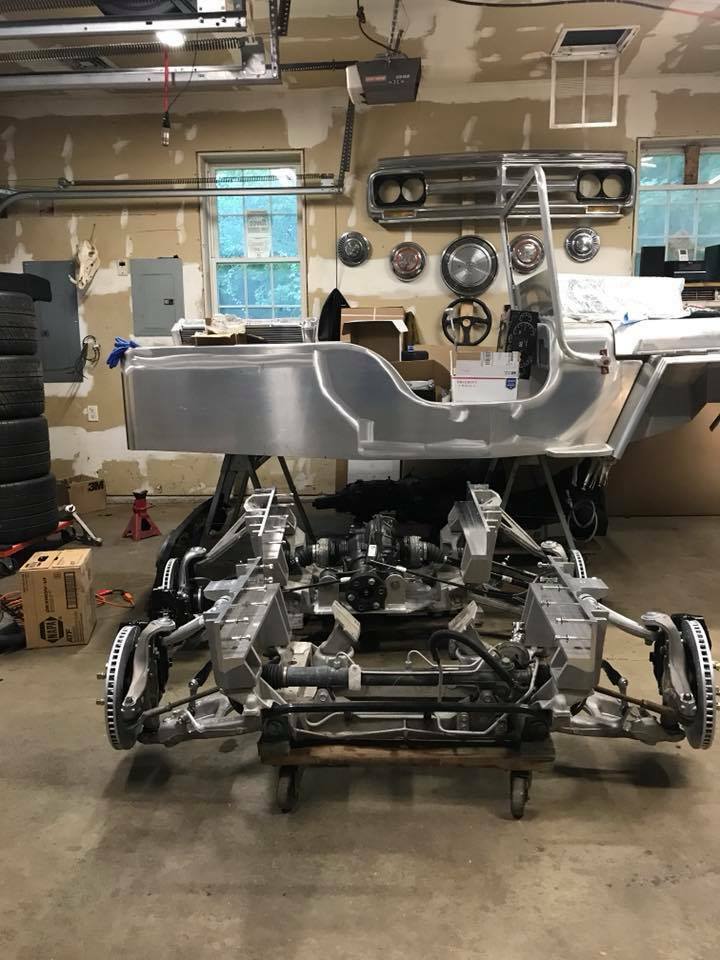 I forgot about this. Glad you brought it over!

So we stuck an LT83 into it. That's an all forged LT1 crank, rods with Mahle pistons, a whopping cam, DOD/AFR delete and an LT4 blower in an L83 block with all new high end wearables.

Had to mod the radiator. 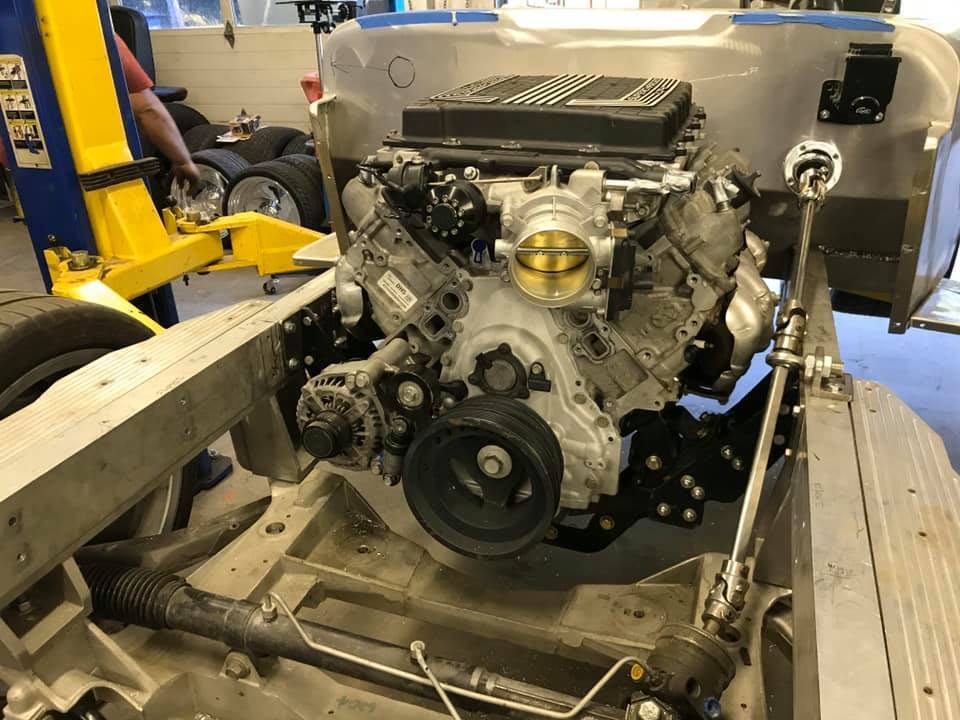 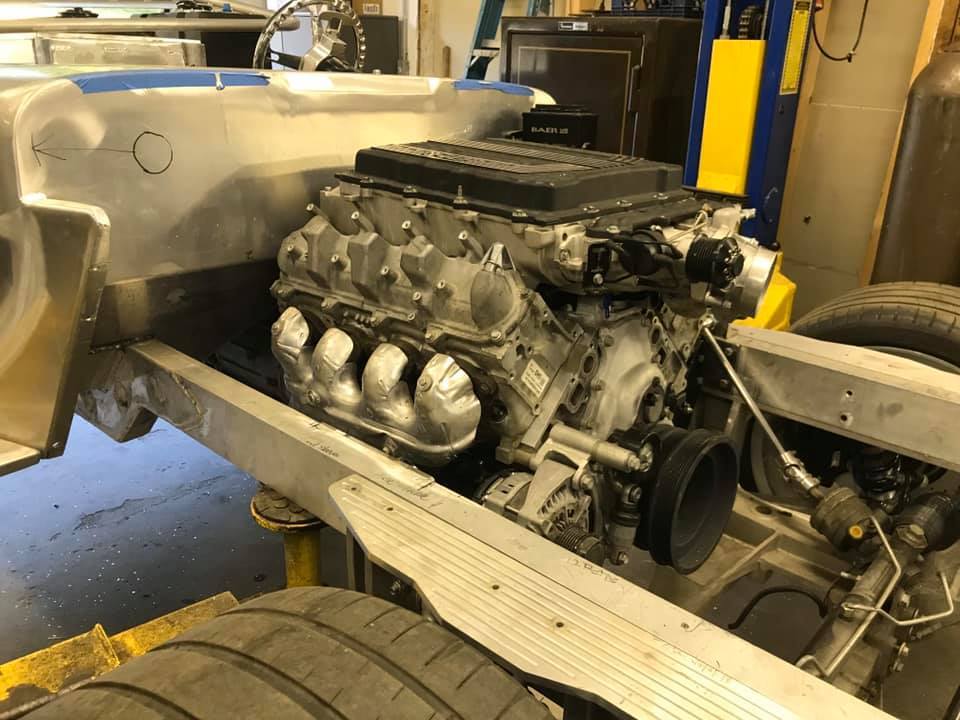 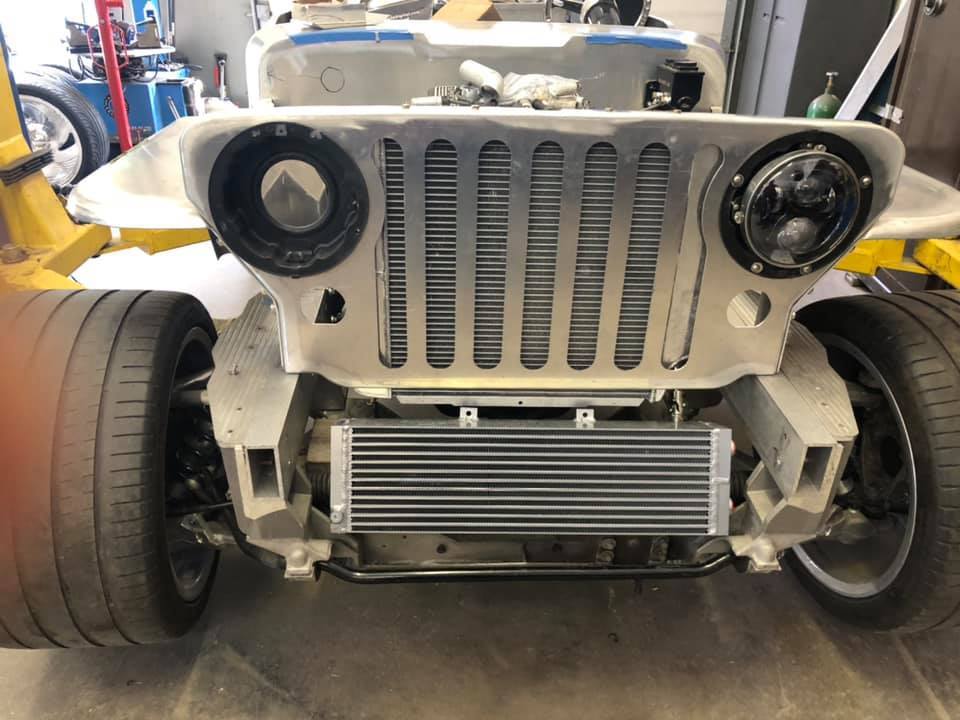 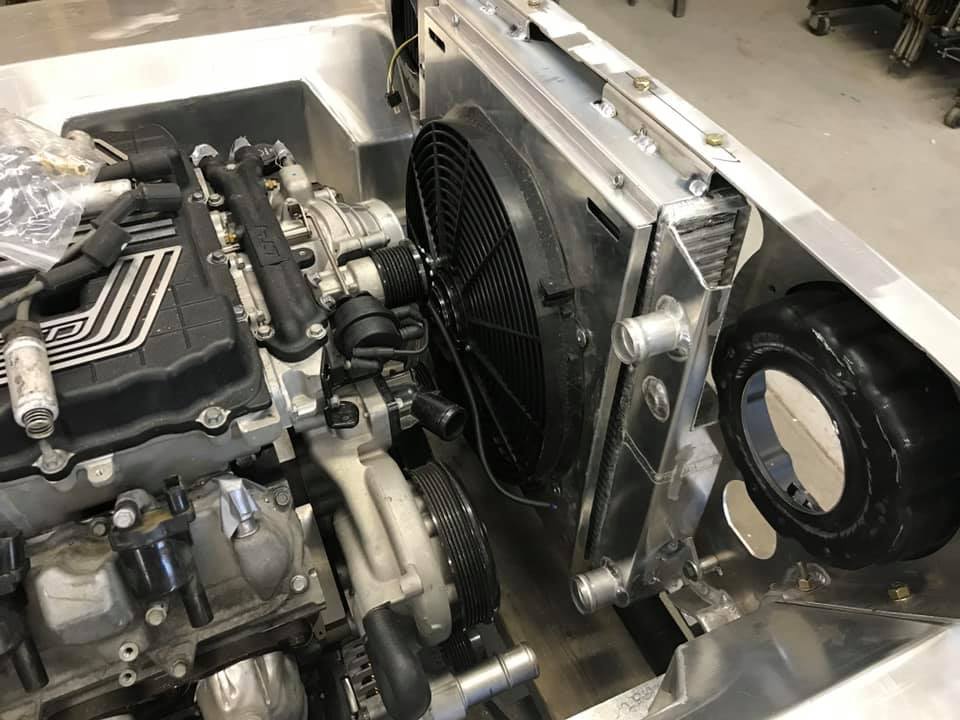 I am looking for a WW2 vintage dummy bomb... they would be water filled, blue (from the factory) and not that big to use as a fuel tank for this.

my only suggestion, use "regular" looking headlights, not those bug-eye looking aftermarket headlights.

Loc
Walking to the Rubicon

Out of curiosity, how much weight is the aluminum frame and body saving?

Lil'John said:
Out of curiosity, how much weight is the aluminum frame and body saving?
Click to expand...

Grendel said:
I am looking for a WW2 vintage dummy bomb... they would be water filled, blue (from the factory) and not that big to use as a fuel tank for this.

Wiring and graphics are next, BTW.
Click to expand...