TLDR; guy is obsessed with his rusty hunk of shit for nearly two decades and depreciates his nice neighborhood by dragging it home. You can relate? Good. Read on.

Back in 2001 I learned about rock crawling. I was just out of school, living with my parents, not making much money but had to have something. A friend's uncle passed and they didn't want anything to do with his '61 Scout 80. I did. They sold it to me for $150.

I was thrilled. "Straight axle, I could afford it and it wasn't a Jeep like everyone else had!". I had no idea that that Dana 27s were weak, the 4 cylinder weighs as much as an SBC with none of the power, and overall it was meant to be a little runabout at best Didn't matter. I LOVED that scout even if I didn't know they existed before walking in that garage.

My friend's Uncle Bob bought it new in '61. He drove it from Bear Creek Pa to Maine once a year for a week of fishing. When he got older it became his plow truck, then it sat. For years. The door hinges were rusted solid. It was so rotted they still opened but where the fender meets the nose became the hinge point. The doors would lay flat on the ground while attached. But hey, it's a one owner 40 year old 'truck' with 33k miles. And I don't care about rust, I'm going to cut it up and wheel it! It's awesome!

It took me two years. Bought it 10/10/02, got it reasonably mobile in '04. Only had one hospital visit due to a lung infection from all the rust dust in that time. I think I had 3 scout 80's and 2 scout IIs torn down for what little was salvageable to get this mobile. I learned a lot, spent as little as possible and it was no where near what I wanted it to be, but driving it was so rewarding.

It was an amazing summer. I met an awesome girl who became my wife a few years later. I changed jobs to make a bit more money, moved out of my parents place into an apartment with the girl and we took a trip to Phoenix. I saw pics on PBB and had to see the place in person.

We ended up loving Phoenix. We were determined to move there by any means necessary. When she became a paramedic we did. Jobs were plentiful and they would cover the move. I backed the scout into my parents yard, we scrimped and saved, a couple months later we moved to Arizona. I was determined to come get my scout as soon as I could, even without a job lined up before heading out.

We rented for 2 years, found a suburb we liked and in 12/2007 signed a contract on a new construction house. The mortgage was less than our rent so we thought we were set. Things were great. Saved up some money, had a place, it was time to get my scout.

No it wasn't. The housing crash came. My wife lost her good paying full time job and couldn't find anything. Ended up working as a per diem tech at a hospital for half her previous hourly rate. She had an hour and a half commute on a good day while most where 2 hours each way. I started getting furloughed for weeks at a time. We burned through our savings, had weeks and sometimes a month of no income. I was told by the manager at Jack in the Box that he wouldn't hire me because I would leave when my job picked back up and he wanted long term employees. There was nothing I could do. We were fucked, lost everything. Closed a short sale of the house with $85 to our names.

That lit a fire in my wife like I never expected. The world would never take from her again. She went from paramedic to associates nurse, to bachelor's nurse then into the absolute hell of grad school for anesthesia. My shy and quiet wife was determined to teach the world that she isn't to be messed with. The whole time she told me she was buying me that diesel truck I've dreamed of for my entire adult life, then we're taking it to get the scout. She was motivated by that so I went along, never believing a word of it.

It was a lot of years, a lot of misery, 4 interstate moves and she got her first job administering anesthesia here in Louisville. We bought an incredible log home on 5 acres with a shop. SHE required a shop for scout. SHE insisted we buy my truck. Last week she says "fuel is cheap, no one's on the road. It's time." I couldn't believe I might actually get my scout.

16 years had passed since I parked my scout. Even I didn't believe myself when I said I'd get it someday. I figured it would be nothing but dust that fell apart when I tried to move it. Turns out the plucky little international was waiting patiently and isnt much worse off than when I parked it.

I can't believe it. My beloved 'someday' rotted out little truck is actually in my driveway. I never thought it would happen.

I dreamed about just getting the damn thing for so long that I'm not even sure what I want to do with it now that it's here. One thing's for sure, I'm going to be quite choked up when I get this nearly forgotten piece of American history brought back to life and we get to take a ride.


I've posted this elsewhere, and someone I hope shows up here asked what I plan to do with it 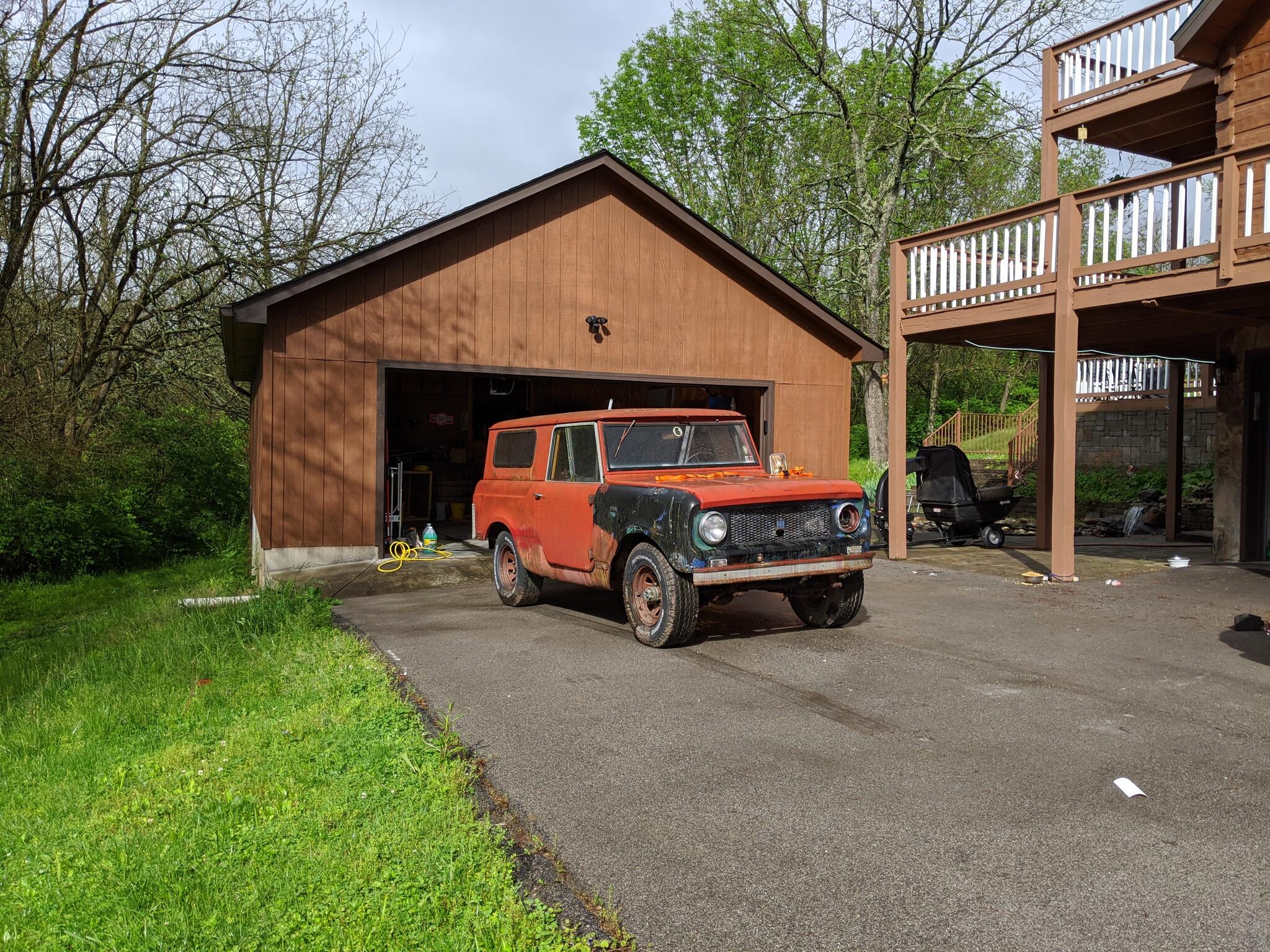 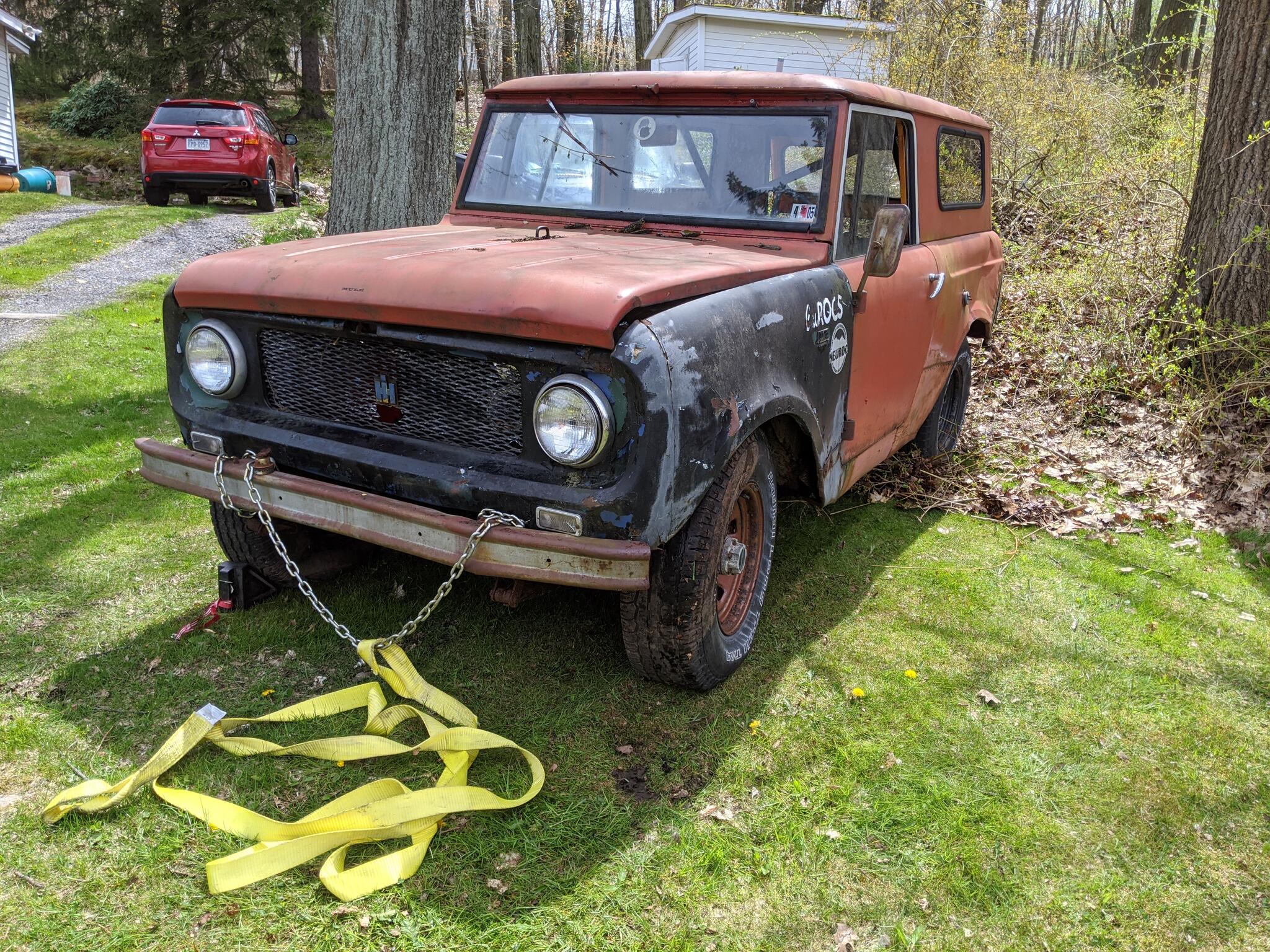 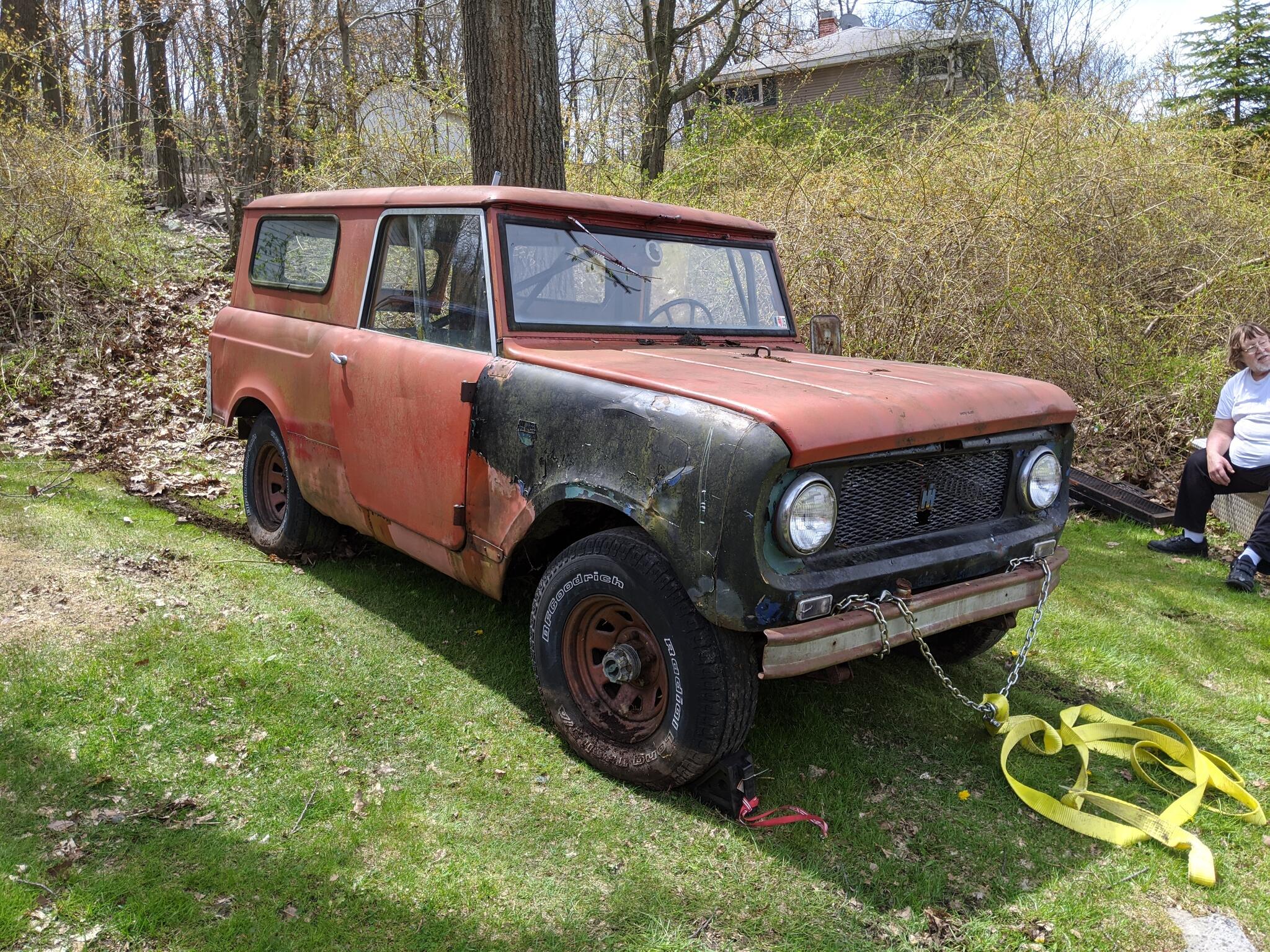 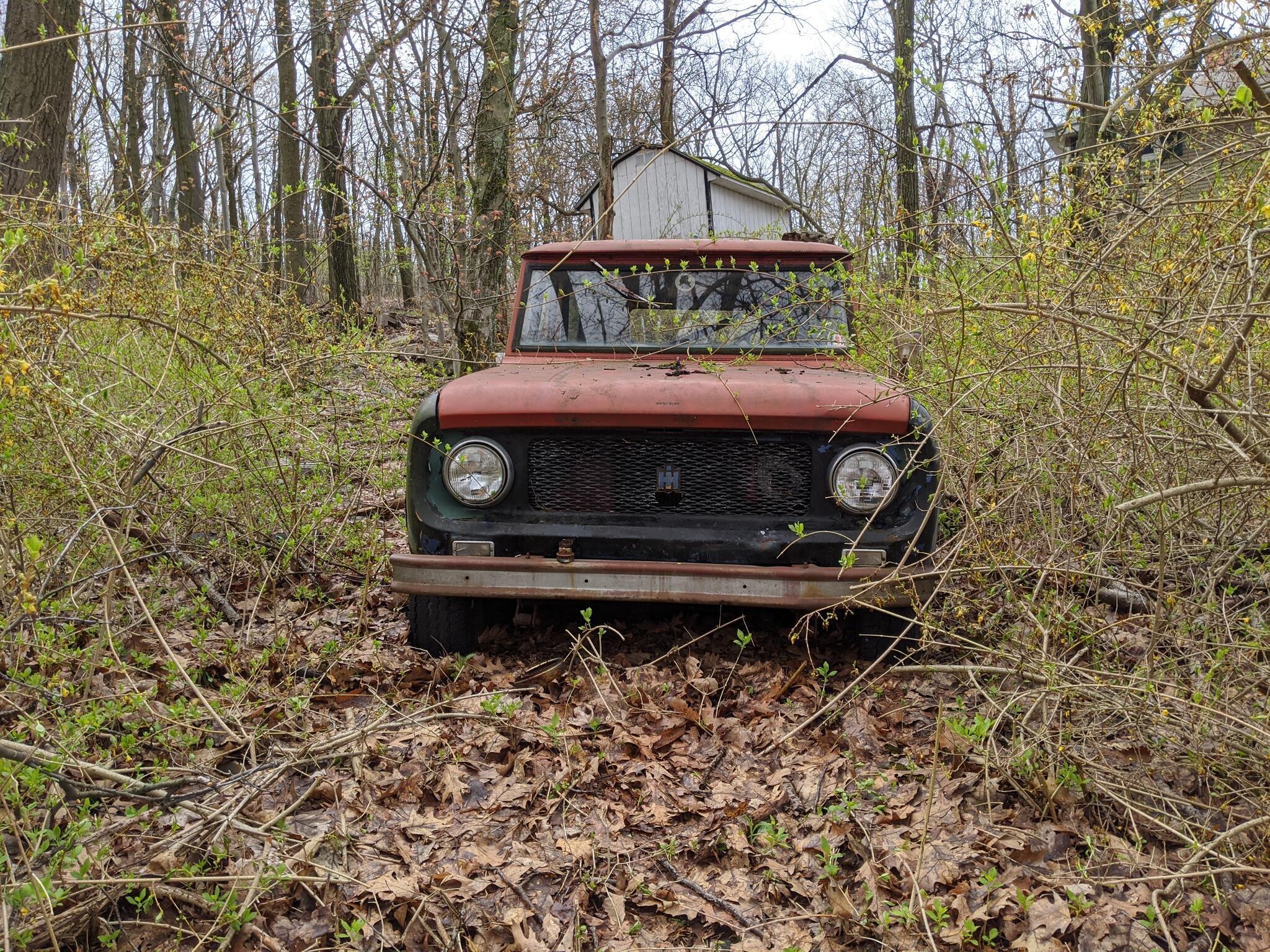 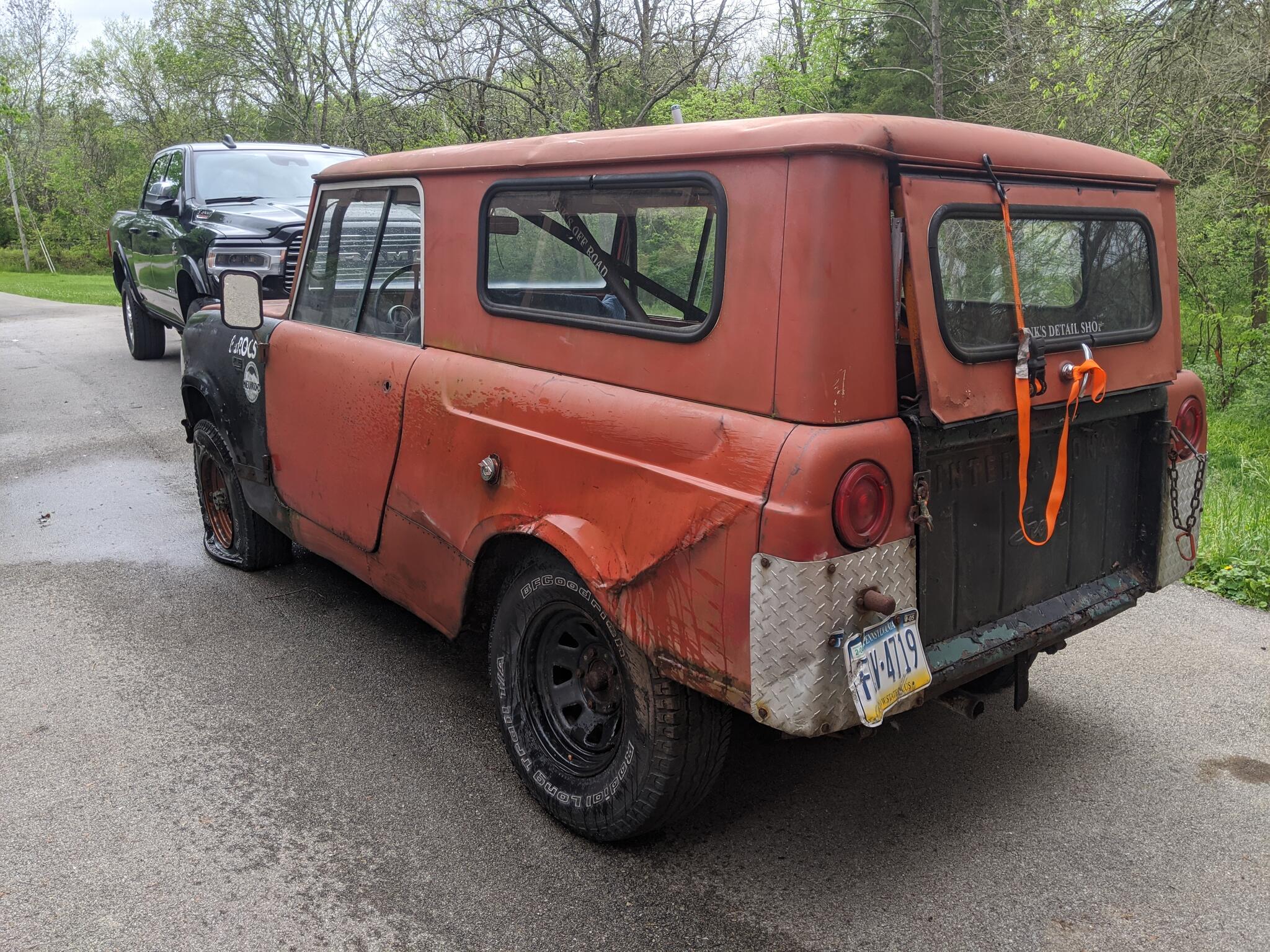 I posted this elsewhere. Someone I hope finds there way here asked what I plan to do with it now that I've had so much time to make a plan.

I went to Harvester Homecoming last year and met a guy named Dave who has my Scout's twin. Dave is one talented dude who made his scout unbelievable. Turns out he lives about an hour away and was excited that he might be able to lend some advice on a restoration.

I thought I wanted to do that. That fund raiser was really cool. I met people that built these things and seeing the pride in them to walk around seeing that their life's work would live on forever really struck me. I thought a "concourse" restoration over years was what I wanted.

A friend of mine who helped me cobble this together back in the day derailed that with a short text message. "Screw that. Anyone can restore something. Preserve it how YOU had it."

I didn't consider keeping my finger prints on this thing until he said that. Now I am. If I go that way I'll have a piece of history that means an immense amount to my wife and I while looking terrible to every other human on earth. I've never been interested in the options of others, why would I start now? I could always restore it later if I change my mind, but it'll never go back to being MY first project if I restore it now.

I don't know what I'll do, but I think I like the idea of reliving my youth for at least a little while.

Aaawwww, that made me tear up a little. Very nice Scout and an even better wife.

Nothing worse than a woman who feels she has been wronged!

It is always good to get your high school ride back together, My 64 F-100 has been waiting since 1987

Did you ever take the roof off and fold the windshield down? That is a cool story. Glad your survivor lives on.

Very Cool story. One Hell of Wife. You're a Lucky Man but nobody need to tell you that. Congrats.

Filthy McChevy said:
Did you ever take the roof off and fold the windshield down? That is a cool story. Glad your survivor lives on.
Click to expand...

But seriously, what everyone posting above me said - great story, happy to see your wife is awesome & your Scout is with you again

Guy in the back

Loc
Beside the point

Awesome. Some inspiration right there.

congratulations, glad you got it back.

How many duty cycles? Want to trade for a clapped out xj?

Jack of all terrains

Love that patina. Time for tons and 40s. You got a sawzall and a welder right?

My wife hates my trucks...

That story is beyond awesome. Looking forward to seeing what you do with it!

61scout80 said:
The doors and top were off all summer, and the windshield was down anytime I was off road. That clip on the windshield is handy!
Click to expand...

So what color does she want it?

Definitely a cool story though! I understand the feeling. Make it technical perfect, keep most of the "patina" but close holes and get certain missing parts back on it.
Last edited: May 23, 2020

gmcxt said:
Love that patina. Time for tons and 40s. You got a sawzall and a welder right?

I married a good one. She supports whatever hair brained idea I have.

I think the sawzall can be reserved for Jeeps, there are plenty and they still make 'em. I like the idea of cruising around in something most people will not recognize. When I was driving it I had a lot of fun with the confused stares and random people asking questions.

Sometimes the ones that would whip a u turn and chase me down because their grandpa had one and they haven't seen one since he died were off-putting. But occasionally they were HOT! Her business card is still clipped to the windshield, but I'm pretty thankful she never called me back. 😁

And not LS Swapped.

Fuck that noise, ls swap everything.

Nice story thank you for sharing. And thank your wife for me.

canadasucks said:
RIP Paragon...brings a tear to my eye...I'm going ten years on my heep & 8 parts rigs.
Click to expand...

I was wondering if anyone would have picked up on that one.

The wife is the ultimate partner-

Dude where is the update on that cutlass/442 ?

Wow what an awesome Scout and story. I grew up with a Scout II, that was my mom's car. No I'm not being mean, my family was so red-necky that my mom's daily driver was one of the coolest 4x4s of all time. Dad had the F250 so the Scout was the little car.

Non-perfect an non-Chip-Foogs 'rat rods' are all the style. Like Vice Grip Garage. You gotta get rid of the fiberglass but you don't have to get rid of the patina. Thing will be better not perfectly restored. Would like to see it in that perfect not-fully-restored but fully-functional state.
You must log in or register to reply here.
Share:
Facebook Reddit Email Share Link