TLDR version
83 22r 15 year old jasper reman with less than 30k. Has a tick at low rpms that seems to fade out as rpm rises. I am 90% sure it's timing chain related but what else should I check before I pull the motor.

What I have already checked.
compression test in spec and even across cylinders
valves adjusted
timing chain guides visually inspected from above and below and look good
oil pump replaced
rod and main bearings checked and plastigaged and in spec
all accessories water and fuel pump eliminated
Put a stethoscope on it and it seems like it's coming from the front of the motor but the noise is definitely carrying through the engine

Long version
After a long high rpm assault on an obstacle I developed a knock on decel. Pull the valve cover and oil pan and could not figure it out. Could mimic the knock by hand rotating the crank. Pulled the motor and found three flywheel bolts were very loose. The flywheel would rock side to side and make a knocking noise. After pulling the flywheel and putting the engine on a stand I could no longer mimic the knock. Figuring I had found the noise I decided to check the crank bearings and refresh the main seals, oil pan, intake, and exhaust gaskets new oil pump do an egr and vacuum delete and put it back together. Got it back together and it fired right up and the knock was gone but now has a tick at low rpms.

more clues
In the oil pan were some pieces of black sealer that had hardened and cracked and fell in to the pan. Also a sliver of thin magnetic metal was in the pan likely from one of two failed fuel pumps. Not sure where else this would come from as all crank bearings were in great shape. During all of the diagnosing the engine was also spun from the camshaft, could this damage the tensioner? At this point I plan to pull the motor and likely replace the entire timing set with an oem set but wanted to get any second opinions. My guess is the chain tensioner is either bad or clogged with a piece of trash.

Sounds like a couple of things to me, hard to tell from the video and without being there though. Typical exhaust leak, OR is are valves lash is set correctly? .008 and .012? It's plausible the tensioner is toast and your getting some chain slap.... rally hard to know without pulling the timing cover and looking though.

Sounds like a bottle of Lucas oil stabilizer is in order.

Valves were a touch on the tight side, put them back to spec and no difference. Pulled the exhaust and the gasket showed no signs of leakage. Put some copper spray on it and reinstalled it but no difference. It doesn't sound like exhaust and definitely seems to be engine related using the stethoscope.

Thanks for the responses.

Could I have jumped timing? With the crank notch at 0. The cam doesn't quite make it the 12 o-clock position . It's been 10 years since I have been this far into one but this seems off. To get the cam to 12 o-clock I have to turn the crank another 15 degrees or better. 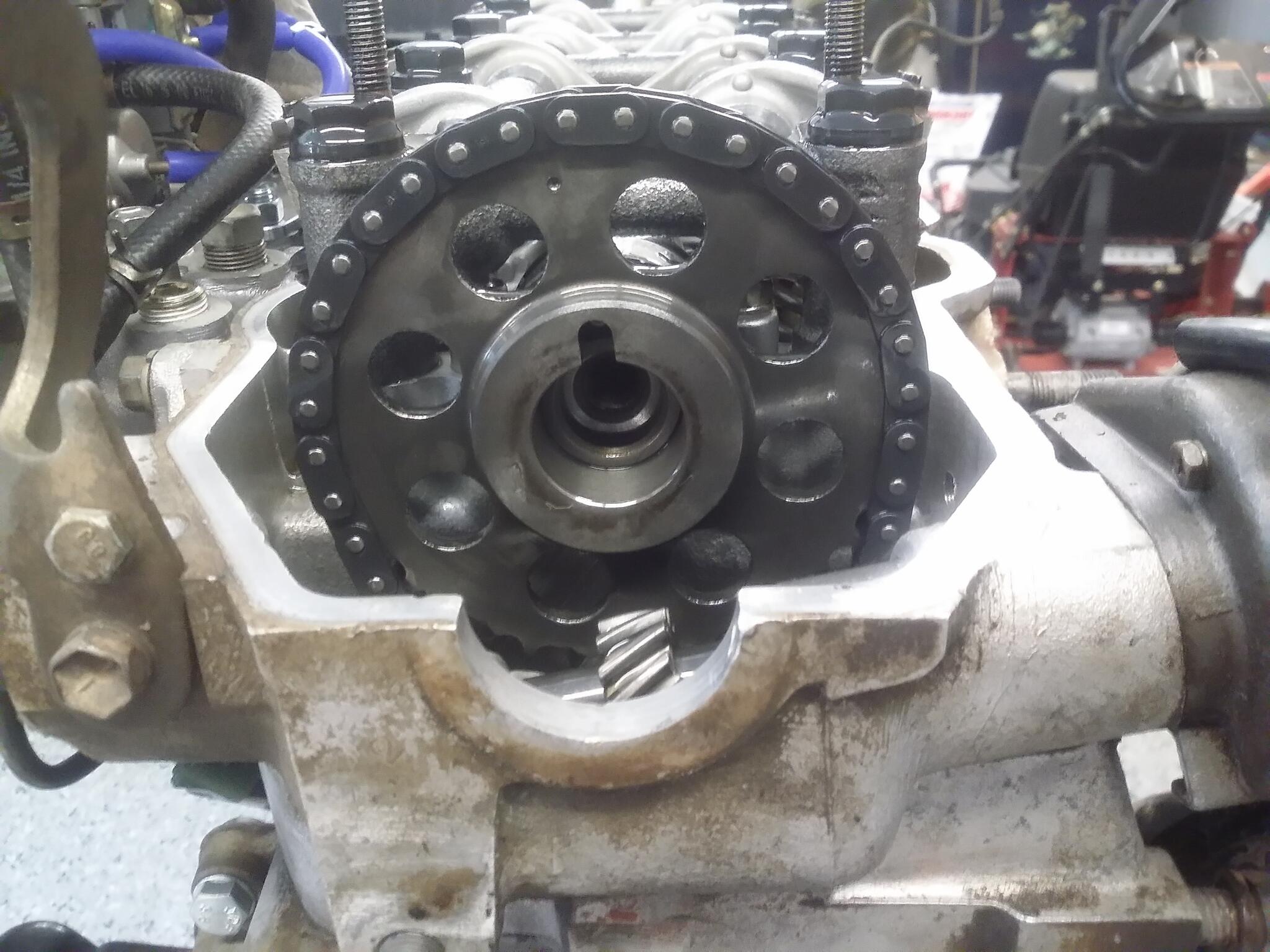 sounds like a burnt valve to me on the video.

It didn't jump timing. I kept rotating the crank and the sprocket dots and bright links all line up.
Pulled the timing cover it's a osk timing set and everything looks ok. Guides fully intact, tensioner has preload and moves freely.
Last edited: Jun 28, 2020

Did you adjust the valves 4 at a time or do them individually based on lobe position? I've had good luck doing them all separately on motors that still sound like a diesel after doing 4 and 4.

I think I got it. There is a mark on the lower part of the timing cover where the chain is slapping. I assume due to a bad tensioner. I can't think of any other reason for the chain to go slack. I did notice when rotating the crank that at certain points in the stroke the driver side part of the chain would go slack and tighten up on the pass side. I assume due to uneven rotation force on the crank and valve spring tension on the camshaft putting pressure in the reverse direction. 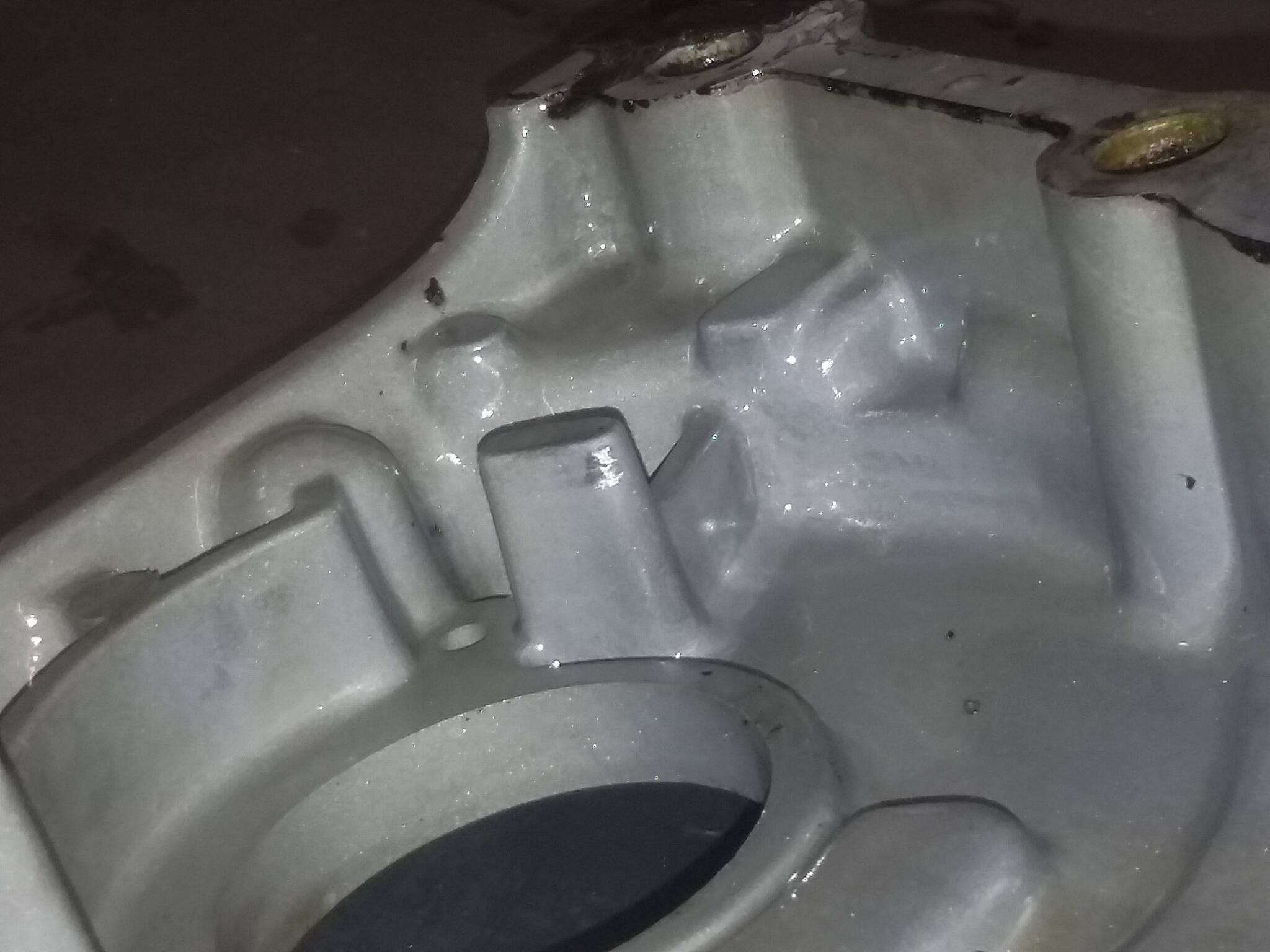 More clues to the mystery, I pulled the oil filter and it was empty. Held it upside down and couldn't get a single drop of oil to come out. Bad filter causing flow issues? Put an air hose on the passage and only oil came out no trash.
Doing a little reading and it seems others have had this issue with bad drain back valves. But I don't think I have ever seen a filter this dry.
Last edited: Jun 28, 2020

alk1174 said:
More clues to the mystery, I pulled the oil filter and it was empty. Held it upside down and couldn't get a single drop of oil to come out. Bad filter causing flow issues? Put an air hose on the passage and only oil came out no trash.
Doing a little reading and it seems others have had this issue with bad drain back valves. But I don't think I have ever seen a filter this dry.
Click to expand...

What filter? I used a mobil1 filter a while back and the dam thing did the same thing (very dry). Had anti leak back diaphram so I figured that's why no oil seeped out when I changed it... turned out to be a bad batch of filters at oreilly's. Swapped with a toyota one and it's been fine. Oil pumps rarely die on the 22r series engines, at least in my experience, so... plus you said you changed it. You also had the pan off not to long ago, so I am sure you would have noticed if the sump screen was clogged up.

It is possible I suppose that the tensioner wasn't getting great oil pressure, at least not enough to put tension on the chain. Would be a first for me though.
Last edited: Jun 28, 2020

It was a microgard from orielys. Oil pickup was cleaned when i checked the bottom end.
My guess is the filter was bypassing flow causing pressure to drop at the tensioner at idle letting the chain slap. As the rpms build the noise gets less to the point I coldnt tell anymore.
I am going to do a timing set and headgasket and flush the oil passages and new filter and see what happens.

I had a tiny bit of RTV clog my tensioner once. Could be some of that loose silicone sealant you found in the pan clogging up god knows what.

Yip... I have seen what Squamch has mentioned before. If the timing cover is still off, might be worth while to pull the tensioner off and flush it, OR just outright replace it.

It's getting a full timing set before it goes back in.

Will do but it may be awhile. Got to spend some time with the families this month. But all the parts are on order.

I got bit by a worn spot on a rocker once on my old sewing machine. Hardening must of failed on the face. Still had height on either side of the worn spot so it wasn't obvious to me at the time.

TLDR
Tore it down most of the way. Didn't pull the crank or pistons but did check the bearings and saw no reason to pull the rest. Didn't pull the valves as the rest of the head and rocker asembly looked fine. Found no evidence of oiling blockages or other oiling problems. Only issue found was the chain hittng the cover. Chain tensioner looked good but the chain seemed to have a little more slack than the new one. Cleaned it all up and put it back together with a new headgasket, timing set oem oil filter and fresh gaskets and seals. I did fill the oil filter before install and put lots of assembly lube in the oil pump as well as a little vaseline in some of the teeth. Let it crank and it built pressure in 20 seconds or so and 5 seconds later oil was flowing from the rear of the rockers. (Did this the first time also) Hooked up the coil and it fired right up. I did have a valve rocker tick but an adjustment got rid of most of that, may adjust it again after a few miles. Now it's time to hit the trail.
​​​
You must log in or register to reply here.
Share:
Facebook Reddit Email Share Link