What used to be Robert's Secret Snow Scout

The last update, I was fighting the T19 transfer case adapter coming loose.

Well, I'm about to pull the Atlas AGAIN to clean those surfaces. I now have some GREEN Locttite coming (the sleeved fitting stuff, not the wick-into-an-assembled-part stuff) and just got some 1/8" thick cork gasket material this morning to see if I can make a thicker gasket, really get those studs to stay put, then some red loctite on the nuts (and top-locks?) and see if I can't get this to stop coming apart.

The studs are into the iron case, but the aluminum adapter indexes off the rear bearing, and there's a slight gap - which I believe is supposed to be taken up with the gasket - then I crank the crap out of the nuts and perhaps the whole face of the adapter is flexing - and ultimately unflexing after a day of abuse.

In January I went back up to Kalispell for SnowBash. I brought Justin in his Scout along this year.

It snowed most of the way there - we spent the day in 4-high in our tow rigs.. there and back.. 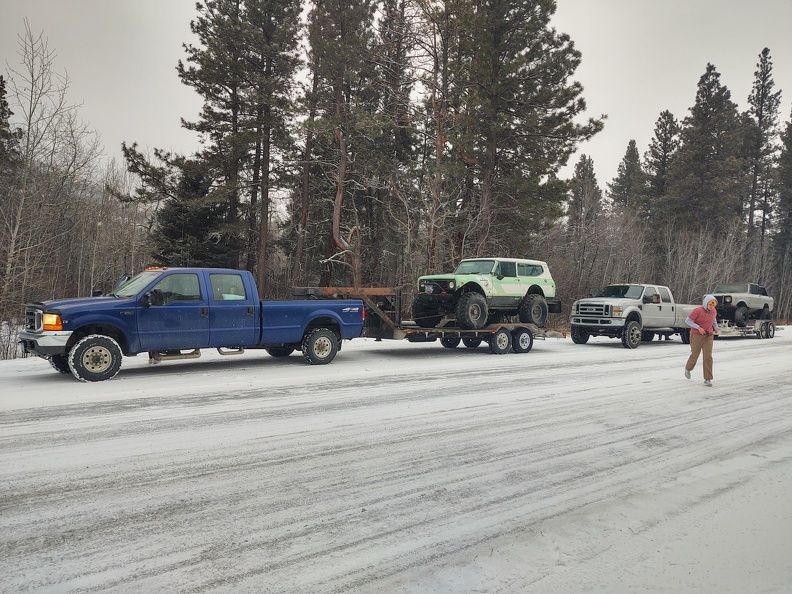 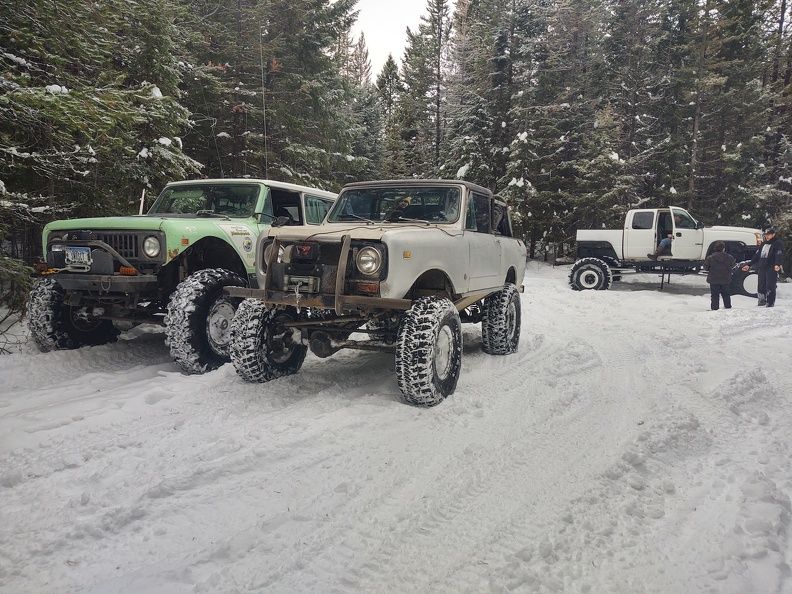 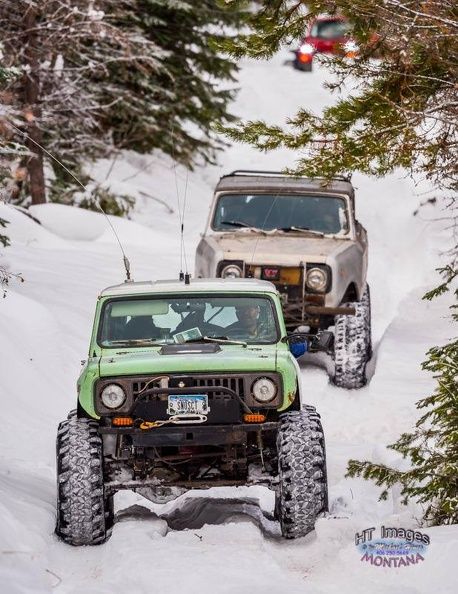 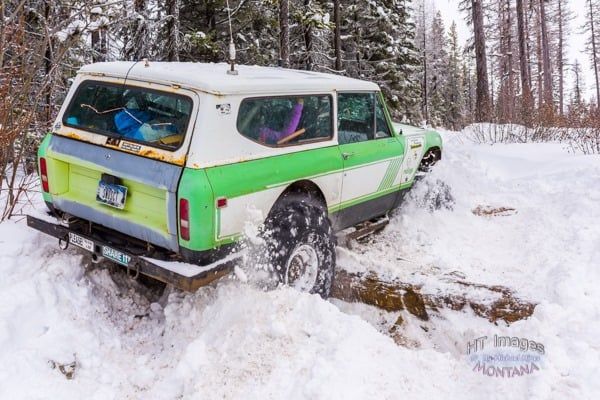 Went up to Tizers later that month. 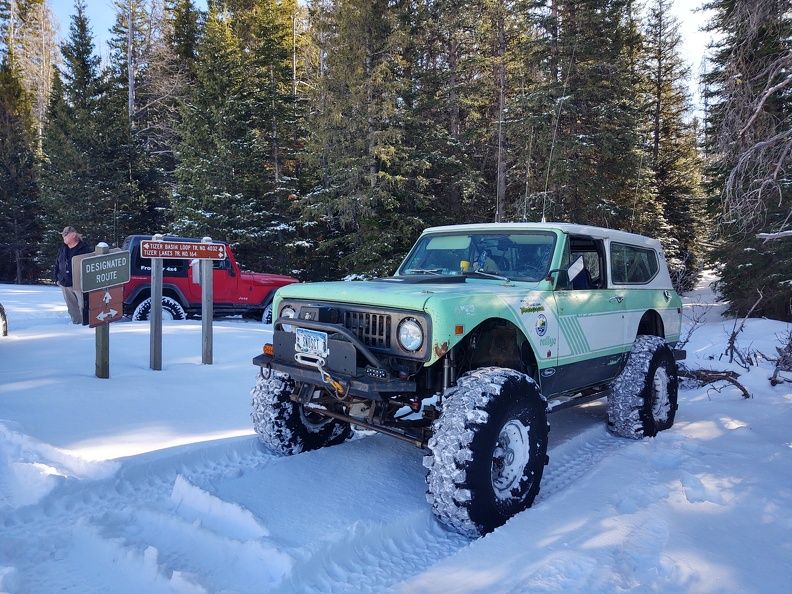 Found a lot of dead fall, then some deep snow before we could make it to the lake. My oldest brought her skates along - she wanted to skate a high mountain lake, but it didn't happen. 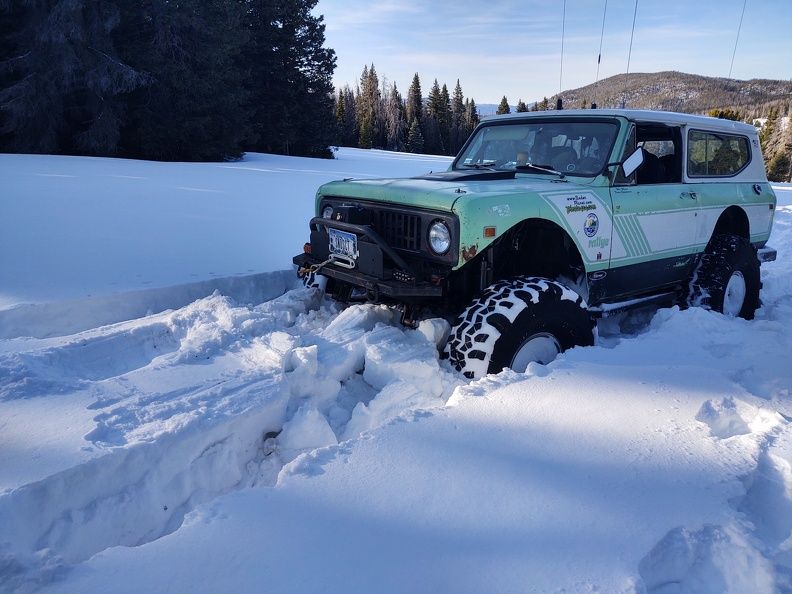 Broke my winch controller near the end of the day - I was all set to buy a new 6HP motor and Albright solenoids only to discover I really did break it - the wires going into the connector finally failed when I yanked the controller out too violently - water had gotten into things and the winch was running itself when I pulled the connector out. 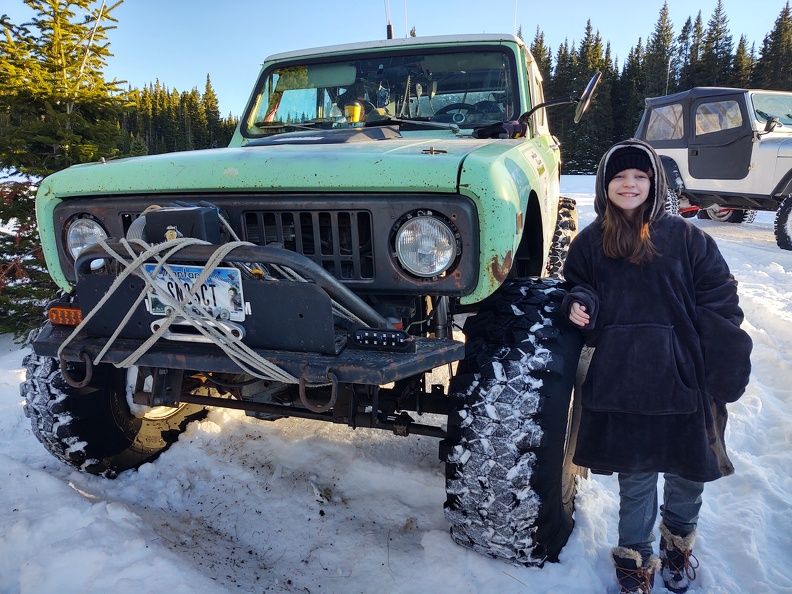 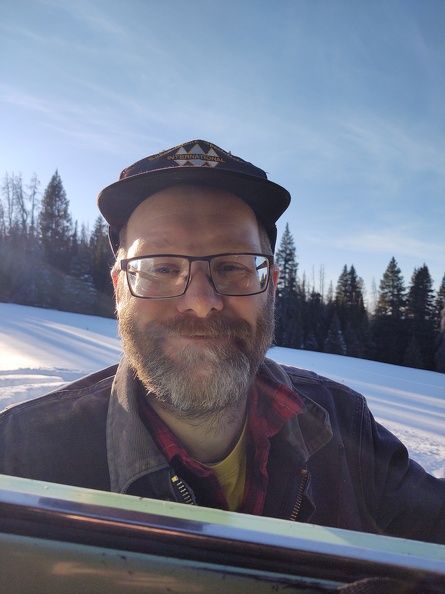 Some tech - keeping the built 392 cool is a constant challenge.

I tried the fan clutch. I tried the Taurus fan. The Taurus wouldn't keep up on the highway - I had to hold it to 45 or so on the frontage road - would mostly do OK, but I had to remember to check my gauges and take a break now and then - and if the battery voltage sagged a little (when the alternator regulator was failing) it wouldn't keep up.

I've been running a Hayden 2705 fan clutch. I finally stopped to read up on what a "heavy duty" clutch does - which is primarily about 10% more RPM / better lock up. 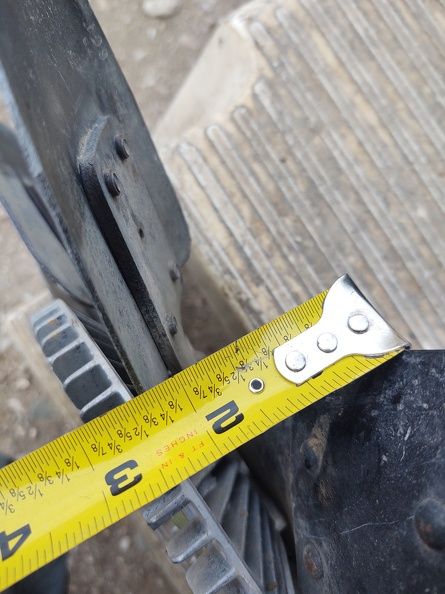 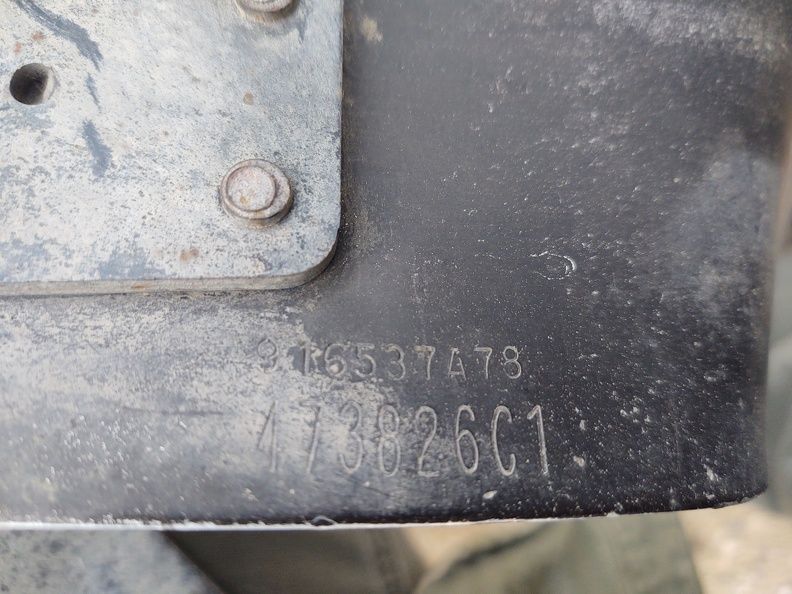 The heavier duty clutch is longer, and space is always at a premium - and I had noticed that my fan was pretty deep into the shroud, so I ordered up this recent addition to the Hayden Catalog. 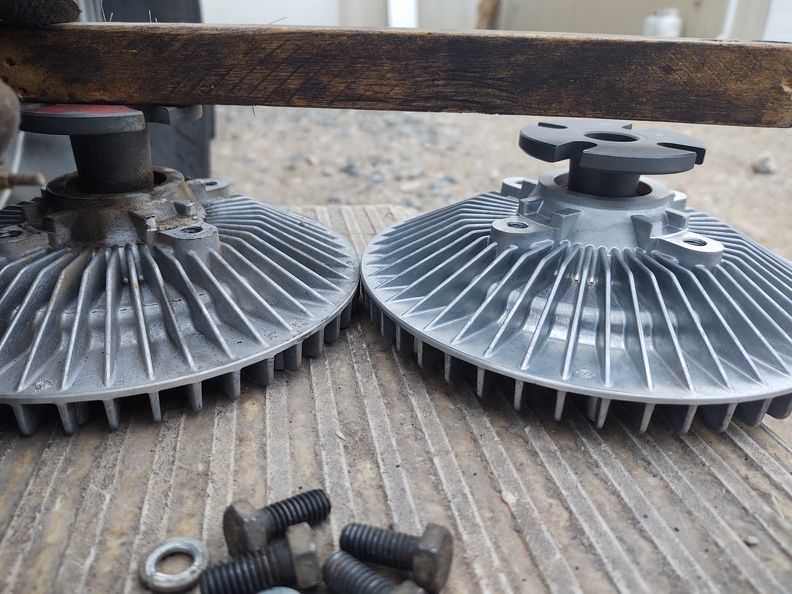 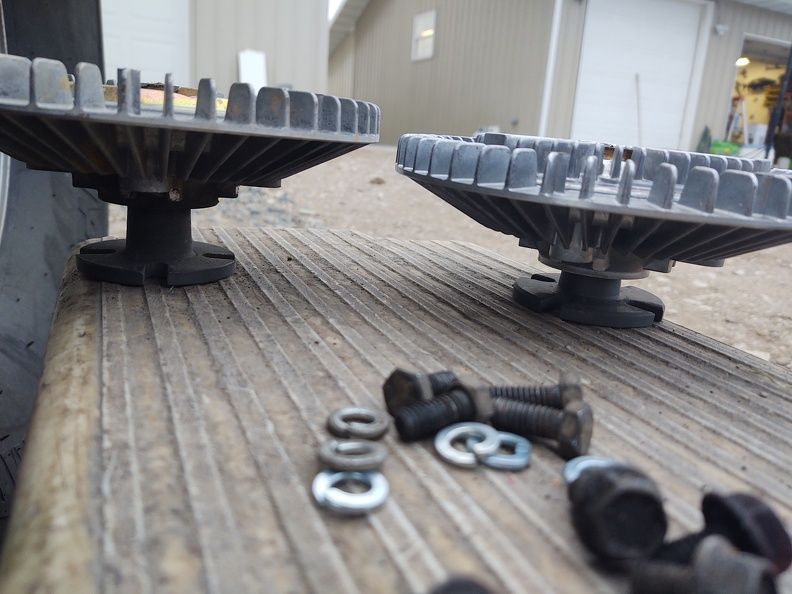 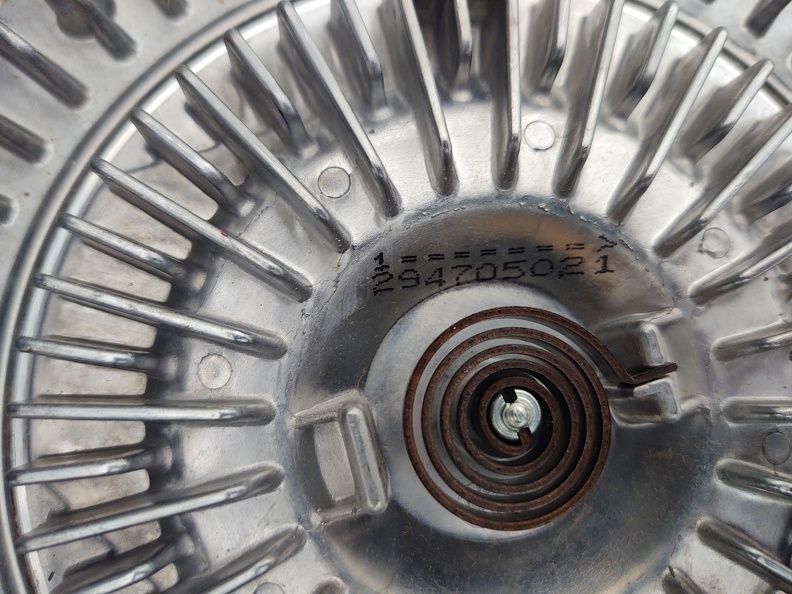 Same bolt pattern for the water pump and the fan.

It moved my fan back a touch closer to the pulleys - with plenty of room there - and away from the radiator.

The big downside - getting the bolts in to the water pump.

I bought a Dorman Water Pump stud kit - 23733 - and then had to shorten the studs so they would clear the spinning part of the clutch assembly.

It was still a pain to get it installed, but it's done.

So far, it seems to be an improvement.

And a little more tech.. we went wheeling over Memorial Day weekend. 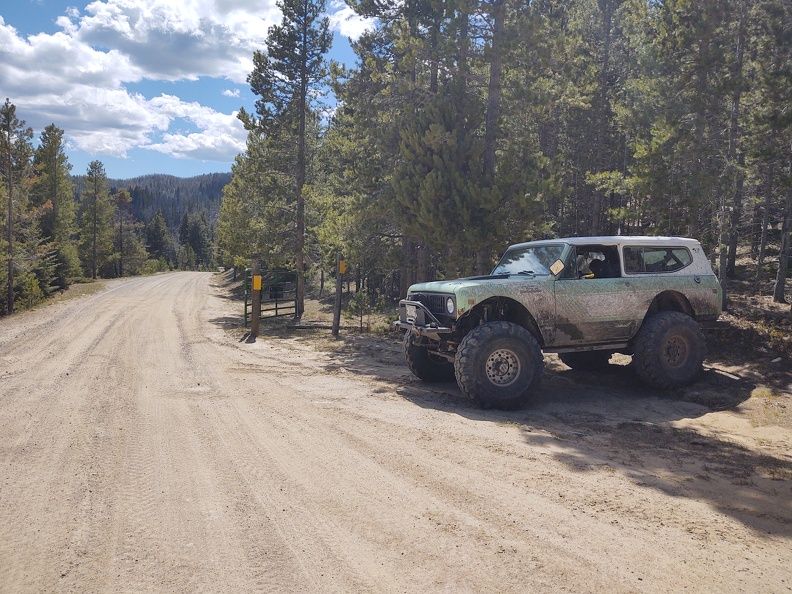 Just enough snow in spots to make it interesting for some, until we hit the big sidehill drifts that were impassable for most.

Me? I embarassed myself getting stuck in the same spots the stock JKs got stuck in.

How? I didn't air down, got stupid with the happy pedal, and I then heard the siren song of the ARB owner "Hey, only one front tire is turning!"

Problem is, I'm a Detroit guy.

It seems one of the past trips through likely the Middlefork (on Labor Day) involved more water than the Scout liked. 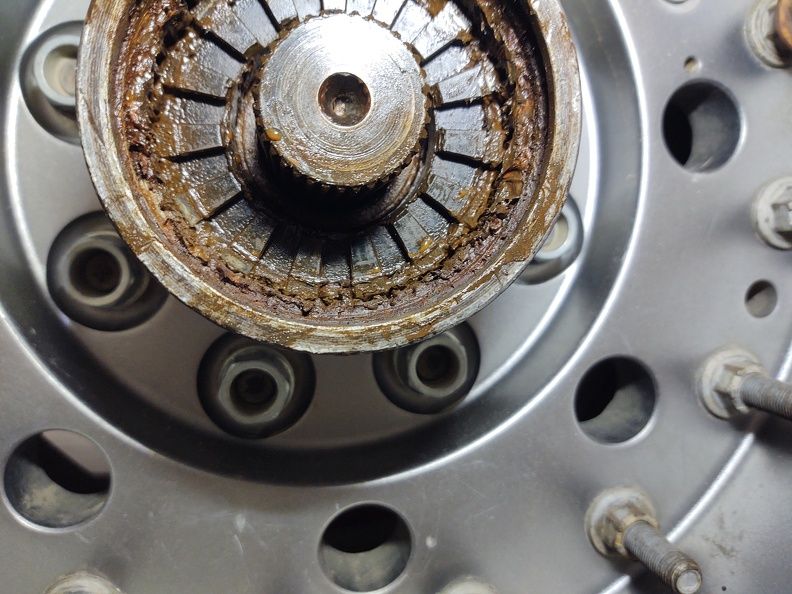 I found the grease was not so greasy any more, and the heavy spring trying to push the drive gear out to engage with the other half couldn't overcome the friction.

OTOH, it was so refreshing to finally spin wrenches working on something IN the new shop, rather than working ON the new shop.

The racer and the Snow Scout were the first vehicles inside. 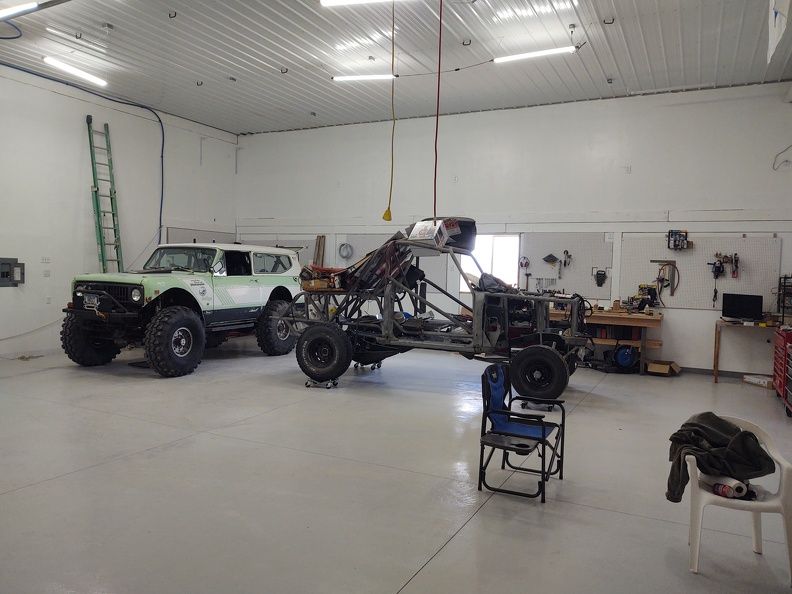 awesome update Tom, and sweet shop. Have loved the stance of this rig since you picked up from Robert and started working on it

If i remember right Tigger was retired LONG ago. take it no racing since, even in a non-IH?

Yea the shop looks great, congratulations. Sorry you are still having cronic teething issues with the Snow Scout. Is the racer still viable to be competitive with the march of technology over the years?

Tigger was the old wheeler, and it was retired shortly after Little Devil, the old racer, was retired. 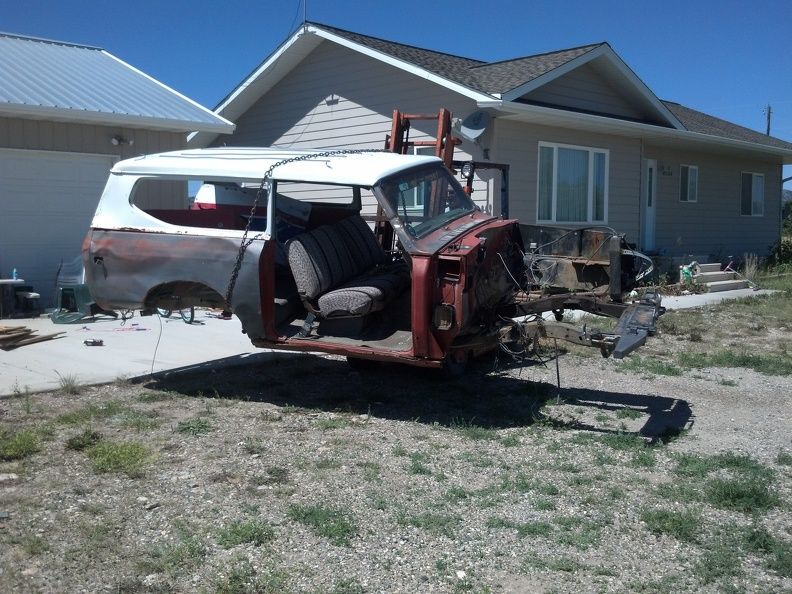 Little Devil was retired in 2011, not fixed because I had this new chassis that just needed finished.

I don't seem to have any photos of Little Devil on the forklift (the same one that hauled Tigger away) but this was the day I stripped what I could from it before the forklift came. 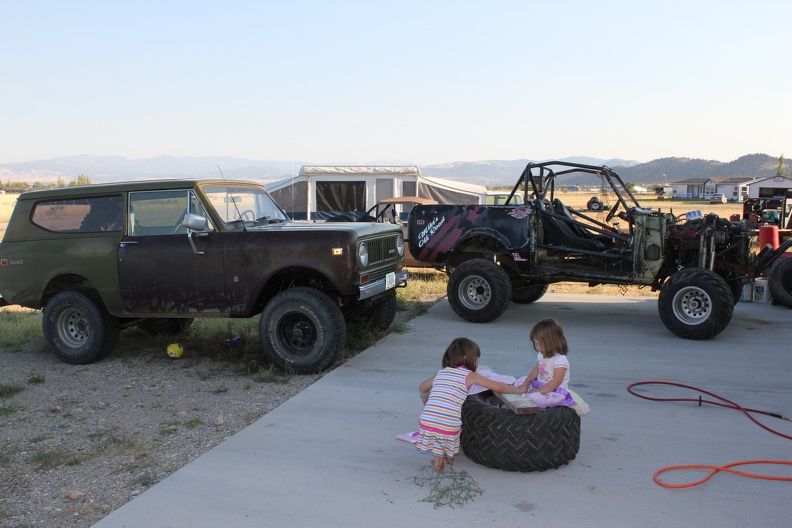 But I can tell you those two cute little girls.. the oldest has her learner's permit, and while the youngest has a ways to go, she already has a '93 Mustang GT drop-top.. (that Dad has to drive and work out the kinks until then)

Part of my problem - in 2013 work had me in Cheyenne every other week, and about 900 hours of overtime (half unpaid). No time to wrench, but I did manage to buy the Yukon axle shafts and so forth.. :) 2014 was better somewhat, but the SnowScout "family wheeler" took priority over Dad's racer..

Yea the shop looks great, congratulations. Sorry you are still having cronic teething issues with the Snow Scout. Is the racer still viable to be competitive with the march of technology over the years?
Click to expand...

Thanks, I'm sure it'll be a mess before long.. and the racer probably wasn't competitive when I started - it has an IH engine still. :D

The bigger question is whether I'm man enough to still drive it..

Back to some tech.. I pulled the Atlas, and I've pulled the adapter back off.

All six studs unscrewed, so none of them were properly captured to the case. 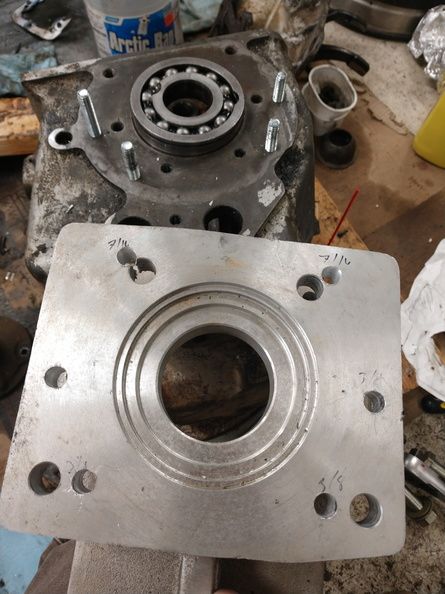 I did some measuring.

I learned a couple of things.

One, is the bearing (when installed, vs in this old picture) protrudes about .020" MORE from the face than the pocket in the adapter will accept.

Not a big deal since there's supposed to be a gasket in there, but maybe a big deal if all you do is use Right Stuff, which I did on the last attempt.

That makes me think that I actually want this to be as tight as I can get it, or at least as close to the .020" as I can.

I had toyed with machining the pocket deeper in the adapter - and if I wanted to go no-gasket I might take .015" out or so.

I have Loctite 620 - green goop for things like press fit bearings.

I think I'm going to use some flange nuts this time, and probably some RED Loctite.

I have a few concerns here.

If the gasket is too thin, the aluminum adapter is bending slightly.

Then you have the bearing walking and slamming into the adapter, working things loose.

So I need to minimize the bearing movement AND minimize the bending on the adapter housing AND keep these studs and nuts from coming loose in the process.

Meanwhile, the bearings are packed, and I made a new tool to drive out the needle bearings in the spindle (turns out, my lawn tractor spindle shaft was just the right size after some clearancing - not sure why I saved it, but glad I did) and have the spindle ready to go back on.
Last edited: Jun 8, 2021 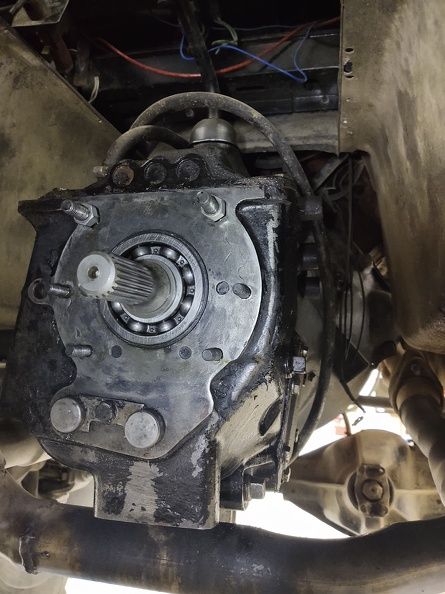 As you can also see, Snow Scout sh*t all over the floor.. and I hung some stuff to try to cut down on the echo.. the racer got moved forward a bit from the earlier photo. 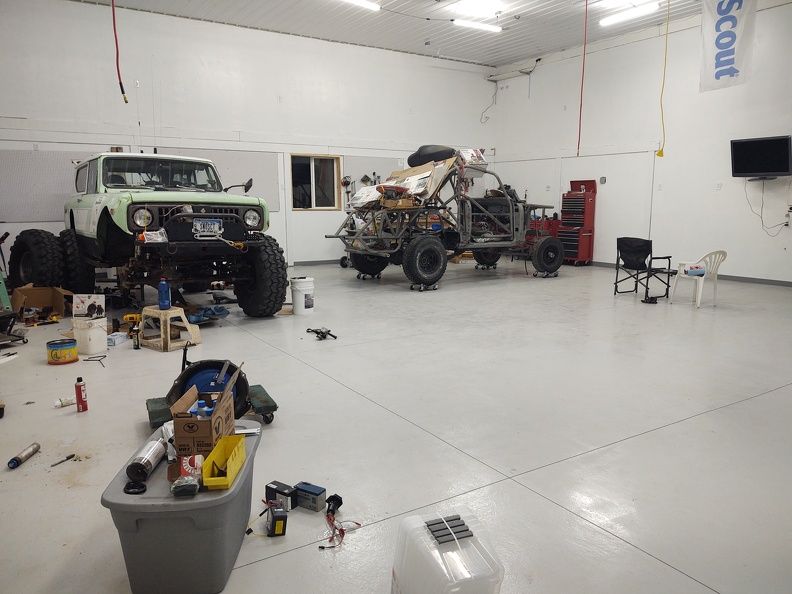 Room to get three wide even when the lift goes in on the right of this one. 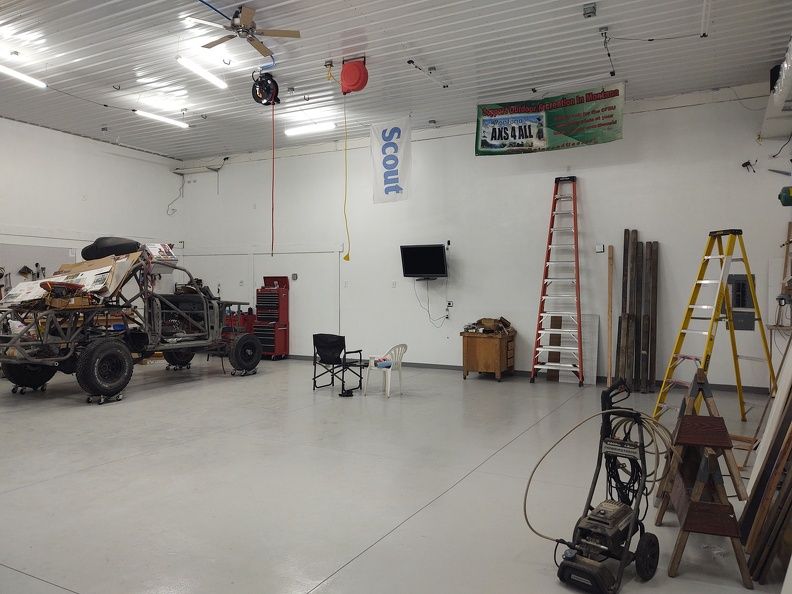 I did get it put back together, and it hasn't loosened up - but it still leaks.

I goofed somewhere in there and had put the Right Stuff on the gasket, but then after I started putting it together, realized I needed to do something differently (I forget what now) and pulled it back apart.

Then, instead of using a fresh gasket and fresh sealant, I thought, "I'll just use this that's already set" - but not adhered to both surfaces.

So it isn't loose any more, it just weeps more than I want still.

I'm debating on pulling it back out this weekend to prep for a run on 9/12, or leave it and top it off and .. fix it later?

It's a tight fit / PITA to pull and re-install with so many bits in the way.

you could try the ol' "brake clean, then smear a layer across the seam on the exterior" method. Worked on the rear diff of my C5 vette for a little bit. semi-hack, but sounds much better than yanking it out again
You must log in or register to reply here.
Share:
Facebook Reddit Email Share Link