Selling Mercedes in the 1980s

What do you want to pay per month?

some of the best body lines ever

And this is how you sell Winnebagos

Ebs said:
What do you want to pay per month?
Click to expand...

You could LEASE a lexus lx coupe for $700 a month.

We all know the Mercedes story, right?

Daimler was named after it's founder, Gottlieb Daimler. Wilhelm Maybach was his tech director, who left in 1907 to found his own company. Benz himself made the first production automobile, the Benz Patent-Motorwagen, in 1885. Daimler and Benz merged in 1926 during the German economic crisis (hyperinflation). That company was called Daimler-Benz, and all of their automobiles were called Mercedes-Benz, in honor of what is also considered the first modern car, the 1901 Mercedes 35. In 1960, Daimler-Benz acquired Maybach, thus re-united all of the original brands, and giving DMG a legitimate claim to being the first production automobile company.

So, in 1955 Daimler-Benz ran at Le Mans. What happened is the worst motorsports disaster in history:

Basically it wasn't the Mercedes driver's fault. It was a Jag pulling in front of an Austin-Healy to stop in the pits, the Healy swerved in front of the Merc and cut it off, which then rear-ended the Healy and launched into the air, directly into the crowd. The scene here is truncated because that's the last film that was 'out of the can' just before the cameraman got creamed. The guy filming almost certainly died. It's graphic footage:

As you can see, the goddamned pit lane is part of the racetrack, and the le Mans circuit requires the the drivers execute a quick right turn before directly running into the crowd, then a quick left turn to avoid smashing through Pit Row. If you designed a track to be the maximum dangerous and guarantee a crash into the crowd and/or Pit Row, you couldn't do a better job than the pre-1956 Le Mans track.

You can then see the footage from Pit Row, of the car launching and landing directly in a crowd of people, then bursting into flames. Next your see the solid front axle with wheels attached fly through the air then bounce off of the crowd at shoulder level, decapitating scores as it goes. Next comes the hood, and it cuts through the crowd like a lawnmower blade, again mostly at neck level.

The next part is the worst, though. The 3.0 liter Straight-8 engines bounces THROUGH the crowd, spinning like a top, chewing through people like an industrial blender. Gruesome.

84 dead, 200+ injured. The deaths were variously: Being smashed into paste by the landing car, being burnt alive by splashing burning gasoline, being decapitated by a front axle or magnesium hood, and being ground into puree by a 600-lb straight-8 engine block. I've read a book that said people were injured by flying body parts and torsos and heads. Imagine getting smashed in the face by a thigh flying through the air at 80 mph.

It should be noted here that the year was 1955. Ten years previously, the Germans were occupying Paris.

Needless to say this all didn't go over well with the Froggies, even though it wasn't Mercedes' fault. Nobody really had TVs back then, and the Press photos were just of the carnage and spectacular accident. As the outrage grew, Mercedes decided to leave Motorsport, and they didn't return until 1988. 33 years.

So from 1955 until 1988, Mercedes didn't have any way to compete with Audi, Jag, BMW, or any of it's other competitors. So they had one mandate: build the best automobile possible regardless of cost, then tack on a known profit margin, then sell it to the public.

That worked, and all of the legendary Benz reliability comes from an era when frankly automobiles had shit reliability, all except for Mercedes. So cars like the legendary 500,000 mile 300Ds were build when Benz had nothing to do but research automobile safety and reliability and luxury features.

Since 1988, Mercedes reliability has dropped off a cliff. The worst era is famously the late-90s to late 2000s. Mercedes still regularly places automobiles in the 'lemon' section of various ratings agencies and magazines: they always produce a stinker. And of course the friggin maintenance is sky-high, which probably helps Merc sell their 'total care plans' with free loaners and valet service.

I personally like Merc, but they're not what they used to be. The S-class is regularly upstaged by other companies when it comes to the latest innovations and safety features, and it used to be a given that the S-class would always successfully deploy a feature first.

Merc has kicked ass in F1, and they have the best F1 driver, Lewis Hamilton. But F1 is also the most boring its ever been, in fact I'd say that F1 pretty much sucks and doesn't seem to be getting any better. So I don't know how much their F1 success is getting them, other than some hardcore fans overseas maybe, and not even Europe.

Middle East customers always demanded the best out of Merc, and so did the dictators, as Top Gear has so hilariously pointed out. Idi Amin, Hoxha of Albania, Nicolai Ceaucescue of Romania, Mao Zedong, Saddam Hussein, the Shah of Iran, Tito, Papa Doc Duvalier of Haiti, all three Kims of Korea, Ferdinand Marcos of the PI (his wife bought shoes), Deng Xiaoping, Pablo Escobar, and Erik Hoenecker (East Germany) are just some of the dictators and blood-lords who had these things.

There is also the Pope and about a million cool celebrities, too, but still.... I mean. The Grosser is the Dictator's Car.

Then there is China. Merc and other premium European brands have largely targeted the Chinese market. It costs about 5x the price of the car to import from Europe, so they are huge status symbols. And the Chinese eat them up as fast as Merc can make them. Mercedes has largely quit making big, reliable luxury cars, because the Chinese who can afford them buy a new one ever 1-2 years, and that's for real. Chinese will throw a Merc away as soon as it has a scratch or develops the slightest problem. This is great for Merc as they don't have to have any sort of dealer support in China, they just have to put them on the showroom and hand over the keys as fast as they can. Then make huge money from stupid Westerners who have to buy the maintenance plan.

I just thought it was interesting to see how what I grew up considering The Car, turn into a meme. I'd love to have the big S-class AMG with all the power and luxury, but until I am a billionaire, I don't see it happening.

Because America doesn't really make a luxury car anymore, I'd like an old American land yacht, but if it was brand-new and luxury, I'd get a Rolls. Bentleys are for pimps, and the Germans just aren't exciting at all. But Rolls is still Rolls, even if it's owned by Germans or whoever owns it right now.

Rolls is also the only car company that makes a uniquely-designed automobile anymore. Cars really do look all the same, but there's no mistaking whatsoever a Rolls for any other vehicle, not even a Chrysler 300

Not even Jags look like Jags anymore in my book. I don't even know what Chrysler, Lincoln, and Cadillac are even doing anymore. 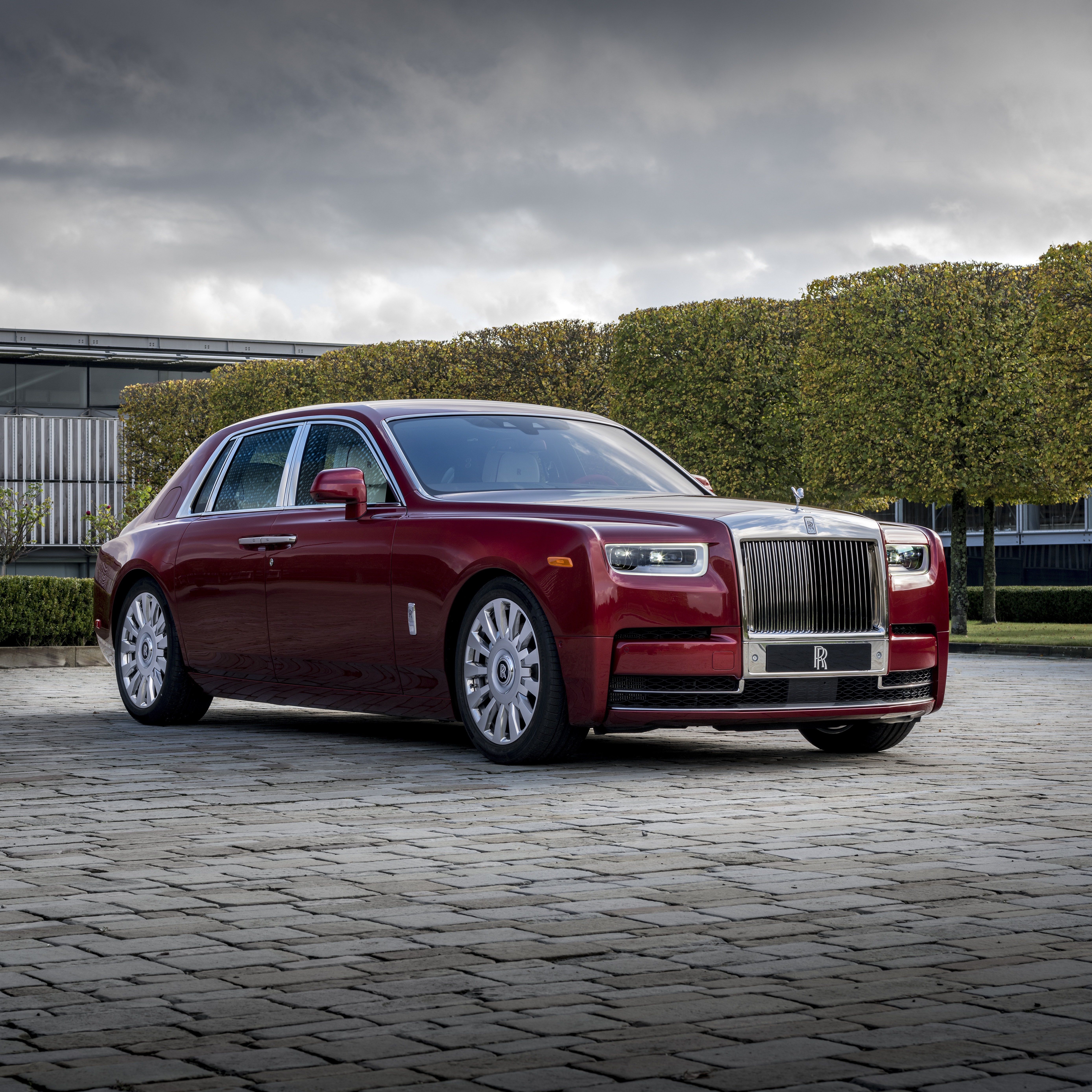 evernoob said:
Rolls is also the only car company that makes a uniquely-designed automobile anymore.
Click to expand...

From what I can tell from watching videos and TV shows.... not like I've ever been within miles of a newer Rolls that I'm aware of... But it looks to me like the interior is also uniquely Rolls. The exterior definitely is.

What's really happening with Bently and Rolls is that they are returning to the 'coach-built' model. Which is entirely appropriate, but for different reasons.

Back in the day, you could order a Rolls or Dusey chassis and motor, and that was the important, avante-garde part of the package. The engine and chassis tech, the Dusey straight-8 for example can't be equaled by anything else. Then the coach work is done by a premium coach shop, which can put their work on anything. You can't really say one coach builder is better than another at the premium end, it's a matter of taste and convenience. That was back in the day when masons spent their time carving intricate details into rocks for commercial buildings, so everyone had artisans and craftsmen on hand.

Today it's for the opposite reason. Any car company including Kia is capable of building a 5-star safety cage, 500-hp, totally quiet and smooth, advanced software chassis, if they make the investment. But, not everybody has a trained and experienced hand pin-striper on duty, or a team of custom upholsterers, or the network of leather buyers who have sources of un-marred leather, or the leather workers, or the in-house design staff, or the exotic wood buyers and joiners, etc....

So, when you can go down to the Chevy dealer and pick any one of a dozen or two, 300-hp, 4- and 5-star safety rated, lane-avoidance, backup camera, satnav, surround sound, adaptive cruise control automobiles for $25k, that technology is not the Killer App. The crafting is.

Do does VW or BMW make the finest underpinned chassis? That's really a matter of preference. A lot of car reviewers absolutely loved the VW Phaeton, and that was the underpinning for the modern Bentleys. I have literally never heard a bad word said about the Phaeton. Usually gushing reviews.

But then BMW has a dedicated following of M5 and 7 series fans. And they underpin the Rolls.

That video is probably better than any sales training out there today.

Just drove my 86 300SDL on a 835 mile trip. 4 guys in the car with luggage averaged 24.7 mpg for the trip running close to 80 mph all the way.
Still a reliable road car with 83000 miles on the clock. Slow as fuck to accelerate but rides like a dream on the interstate. Not a good town-city car imo because of it's size. Not my daily driver but our road trip car. Planning to drive it to Niagara Falls next year on our 45th anniversary. Should be around 1500 mile round trip. Got no doubt the ol girl will make it with no problem.
You must log in or register to reply here.
Share:
Facebook Reddit Email Share Link