The beach has not been used since the Commie-COVID scam started, and the dust actually got WORSE!


Excessive dust days have more than doubled since RVs and off-road vehicles were barred from the Oceano Dunes, data from two Nipomo Mesa air quality monitoring sites show. California State Parks closed the Oceano Dunes State Vehicular Recreation Area to all off-road and recreational vehicles on March 28 because of the coronavirus pandemic.

For years, the APCD and Nipomo Mesa residents have clashed with state parks and off-road vehicle riders over the cause of dust in the air at the Nipomo Mesa. Both sides agree strong westerly winds blowing over the sand dunes transport dust to the mesa.

In 2018, California State Parks entered into a stipulated order of abatement with the APCD. The agreement mandates that the state reduce wind-blown dust, specifically dust particles that are 10 microns or less in diameter, on the Nipomo Mesa by 50 percent. Despite agreeing to the various terms in the agreement, state parks still denies that off-roading causes the dust on the mesa. 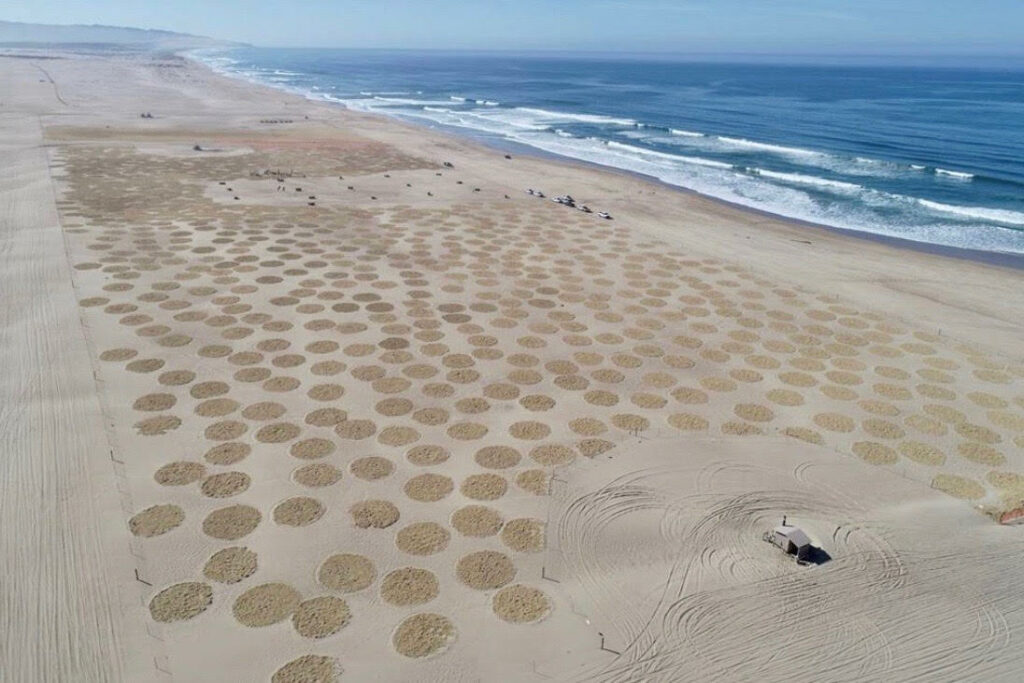 The primary goal of the agreement is to ensure that concentrations of dust measured on the mesa stay within federal and state standards, as measured at two of the APCD’s air monitoring sites on the mesa, which are known as “CDF – Arroyo Grande” and “Nipomo-Guadalupe Road.”

Overall, the state has spent approximately $14 million in tax payer revenue in the last 10 years to reduce dust concentrations on the mesa. The state covered more than 150 acres of dune sand with vegetation or orange plastic fencing. Additional dune-covering projects are anticipated in the coming months and years, under the theory that the obstructions would help reduce dust produced by the blowing sand.

CalCoastNews examined archived data from wind and dust measurements collected from the two Nipomo Mesa air quality monitoring sites to determine if State Parks’ mandated efforts along with the closure of the park in March would lead to a reduction in dust concentrations.

Specifically, reporters examined the number of daily exceedances of state and federal air quality standards during the month of May for the past six years at the two monitoring sites. The CDF site is approximately 2.5 miles from the dune shoreline, on the southwest edge of Nipomo Mesa. The Nipomo-Guadalupe Road site is about four miles from the shore, on the lower edge of the mesa. Agricultural lands lie between the coastal dunes and the Nipomo Mesa.

The parameters were chosen because May is typically the windiest month in south San Luis Obispo County, and 2015 predates the various dune-covering operations undertaken by State Parks.

Wind data indicates that May’s average wind speed at the two monitoring sites has varied little from year to year. At the CDF site, the May winds average at about 5 miles per hour, and at the Nipomo-Guadalupe Road site, the winds are slightly stronger, averaging about 5.5 miles per hour.

The number of exceedances of California’s air quality standard for airborne dust tells a different story. At both of the air monitoring stations, a substantially greater number of May exceedances occurred this year compared to the other years, even though there have been no recreational vehicles on the dunes; and the month of May has not yet ended.

As part of the agreement, a panel of scientific advisors, known as the Scientific Advisory Group (SAG), was formed to assist in the design and implementation of the various dune-covering projects. The SAG is led by William Nickling, an emeritus professor at the University of Guelph in Ontario, Canada.

In apparent anticipation that continued high-dust days with no vehicle recreation in the dunes would cause confusion, on April 6, Dr. Nickling and other SAG members authored a memorandum regarding the vehicle closure at Oceano Dunes and possible changes in dune dust emissions.

“It is the opinion of the SAG that the accumulated impact of OHV [off highway vehicle] activity remains a significant contributor to observed PM [dust] emissions at ODSVRA, even during this period in which the ODSVRA is temporarily closed to recreational uses,” according to the memorandum. “The SAG acknowledges that the Oceano Dunes are a naturally dusty surface that would experience PM emissions even in the absence of human activity, especially during this spring windy season. But the SAG is also clearly aware that decades of OHV activity have fundamentally altered the natural beach-dune landscape, making the dunes significantly more susceptible to PM emissions than they would be in a natural state.”

However, the SAG memorandum fails to explain how the dunes have been “fundamentally altered” to emit more dust, and also why the SAG did not anticipate the number of state exceedances for dust to substantially increase in the absence of vehicle recreation on the dunes.

One theory is that the recreational vehicles that used to park on the dunes, helped obstruct the wind flow.

The big Q is whether it will do any good?

The big Q is whether it will do any good?
Click to expand...

the negative nancy in me says no way jose ... they will extend the closure for further assessment, litigation, more assessment, rinse and repeat. im sure somewhere in there an endangered plant or animal will magically make a return to its 'native' environment.

Ghetto Fab. said:
Sounds like its time to file a lawsuit.

glad to see yer still involved in the 4wheeling community. hope all is well fer you and yer family.

glad to see yer still involved in the 4wheeling community. hope all is well fer you and yer family.

Good to hear from you too! Still out in Arizona?

yep im in az. im really happy here. dont need to smog vehicles, get/build pretty much any firearm i want, ride a quad from my house and be in the woods in less than 10 mins. i got married a few years back. other than that im still the same guy you knew 20 years ago haha
you still in a-town. heck ill just send you a pm

What am I looking at in that picture? the circles in the sand?

I'd be lieing if I told you. If I had to guess I would say maybe there dust testing.

Austin said:
What am I looking at in that picture? the circles in the sand?
Click to expand...

I'm local (well just inland a bit) to the area, the Coastal Commission is full of shit and want to close the dunes for no good reason.

Grronk said:
Its circles of hay spread out in an attempt to lower the amount of dust the wind kicks up

I'm local (well just inland a bit) to the area, the Coastal Commission is full of shit and want to close the dunes for no good reason.
Click to expand...

They have way to much power and are highly abusing it here in the dunes closure.

Yblow said:
They have way to much power and are highly abusing it here in the dunes closure.
Click to expand...

They really do. They know they are abusing it, and they know the State government is too much of a pussy to step in and tell them to fuck off and leave our State Park alone.

All these retard out of towners buy a house AT THE BEACH and then complain about beach sand in the wind.

Your kind of Asshole

Hay on the beach when onshore blows at 20 every day?

I'm sure there using our tax money wisely

Yblow said:
I'd be lieing if I told you. If I had to guess I would say maybe there dust testing.
Click to expand...

I stayed in a airbnb and the guy did dust testing in the desert.

I didn't even know where to start. like yeah, there's dust in the desert I guess?

There are some AMAZING stats about desert dust on this "documentary".
https://www.buzzfeed.com/newsoclock/...-all-connectee

Xtreme wheeler of the web

Fuckers, who puts these dumbasses in office.

Commission votes to close Pismo in 3 years. A unanimous vote even, not a brain on the commission.

Zero care about environment, all about hate for those with jobs and money.


Something that is “very important is focusing on equity, which to me means both purposefully dismantling inequities in power and money, and access to those, as well as doing no harm to people whose voices are drowned and yet are most impacted by all of the land-use decisions that the state makes, including the commission,” said Commissioner Linda Escalante
Read more here:

I could write a novel about how "save the planet" is killing America.

In all honesty, be prepared to loose. We are all going to loose something that we love to do, whether its wheeling, fast cars, guns, etc.... Its all going to go away, its just a matter of time. Why? Because we don't have the soccer moms on our side. The Karen's and Nancy's are all about "save the planet" and protect the kiddos. Funny thing is they don't even know they are fighting you. They have no idea who you even are and they don't care, they need to get the kids to soccer practice and go get that starbucks latte. No politician is going to be successful stepping in front of that onslaught of minivans and crossover vehicles. They are the most powerful voting block currently and the dems have them fully in their pocket. If you want to have a chance at keeping what you love, you must get the sympathies of the soccer moms, otherwise your just pissing in the wind.

I have been watching this and thought we had a better chance with the blowing sand theory being debunked. I wonder how much longer until all OHV use gets killed off.
You must log in or register to reply here.
Share:
Facebook Reddit Email Share Link