So I this may be a little out of order. I lost pretty much all of my pics from the beginning of the build breaking phones and shit. So I'm getting back on it and throwing up what i have for now.

Little back story. I got this thing in 2017. Wanted to build a rig the wife and I and kiddo could drive out west, wheel some trails, sleep in or on top of it, and drive back home to Bama. The previous owner killed the trans and I hate autos anyway. So plan was always to convert to manual. Ran across a 94 truck that had already been sas'd with a hp60/ 14b and had a nv4500 in it as well for pretty cheap. So bout the time I got the rear shackle flip and 14b in it we got some bad news.

My son has Marfans Syndrome. Which we already knew. His lens in both his eyes dislocated when he was 3 and thats how we found out. But he had no other new issues pop up till his retinas started detaching at basically the same time. So that put the tahoe on hold while he had 6 eyes surgeries over the 2 1/2 years and he missed a year of school.

In the middle of that we sold basically everything we owned other than a car, truck, tahoe and our belongings. I quit my job. We bought a truck camper and traveled for the next few months showing my son a little more of the world thats out there.

So now I'm back on the tahoe to get it done for a few months out west next year. 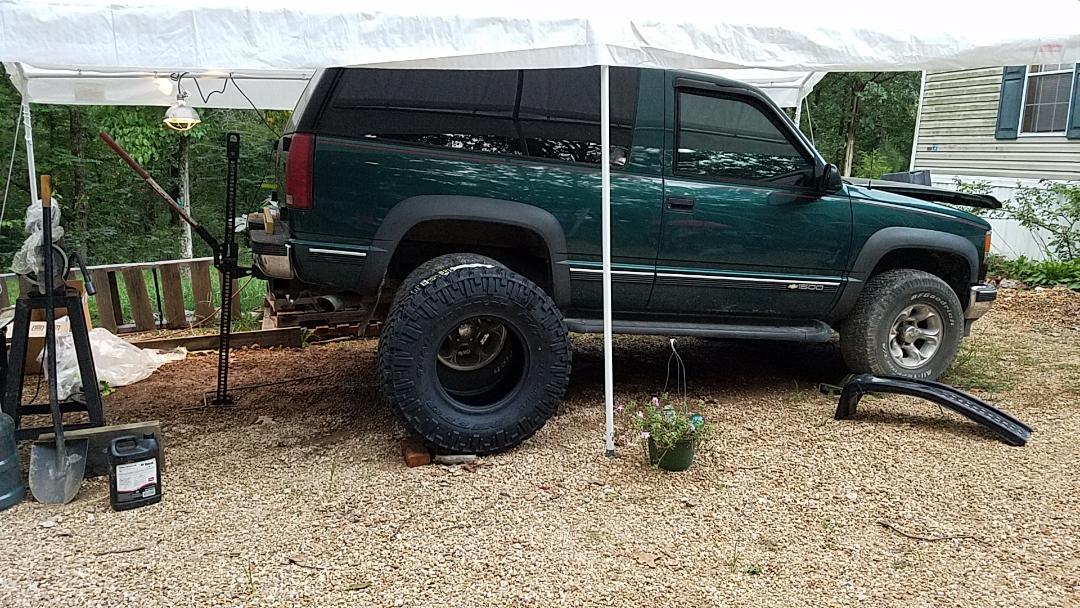 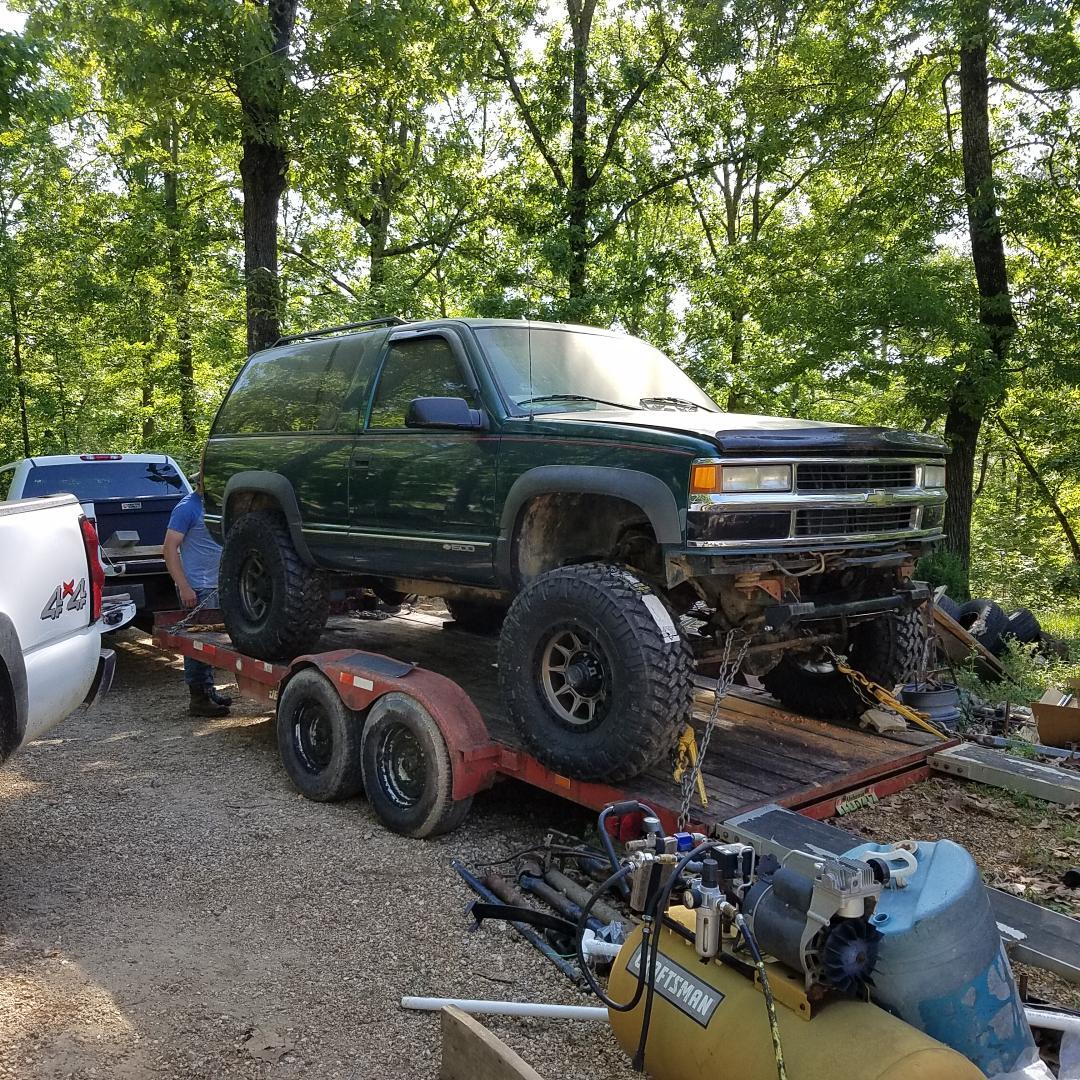 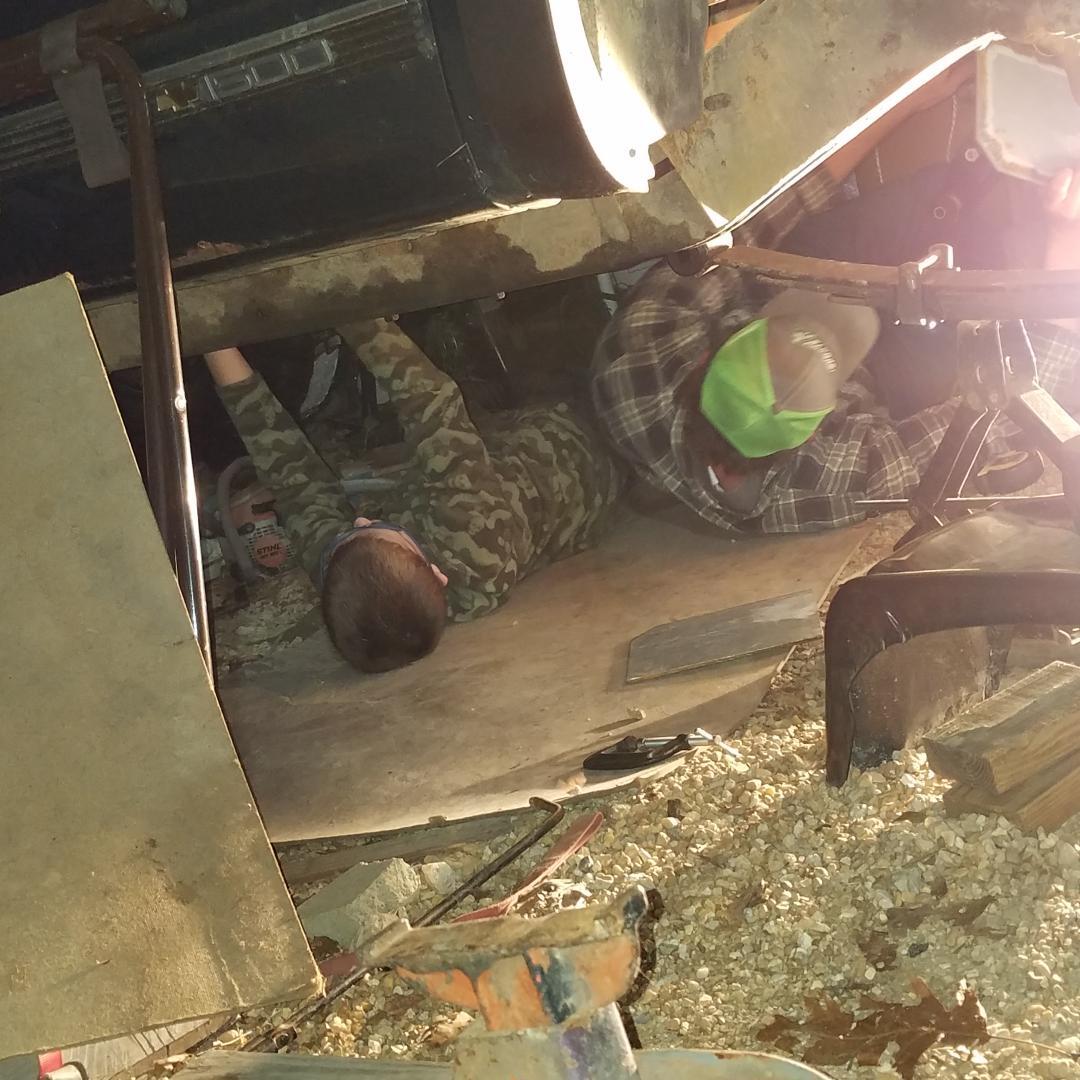 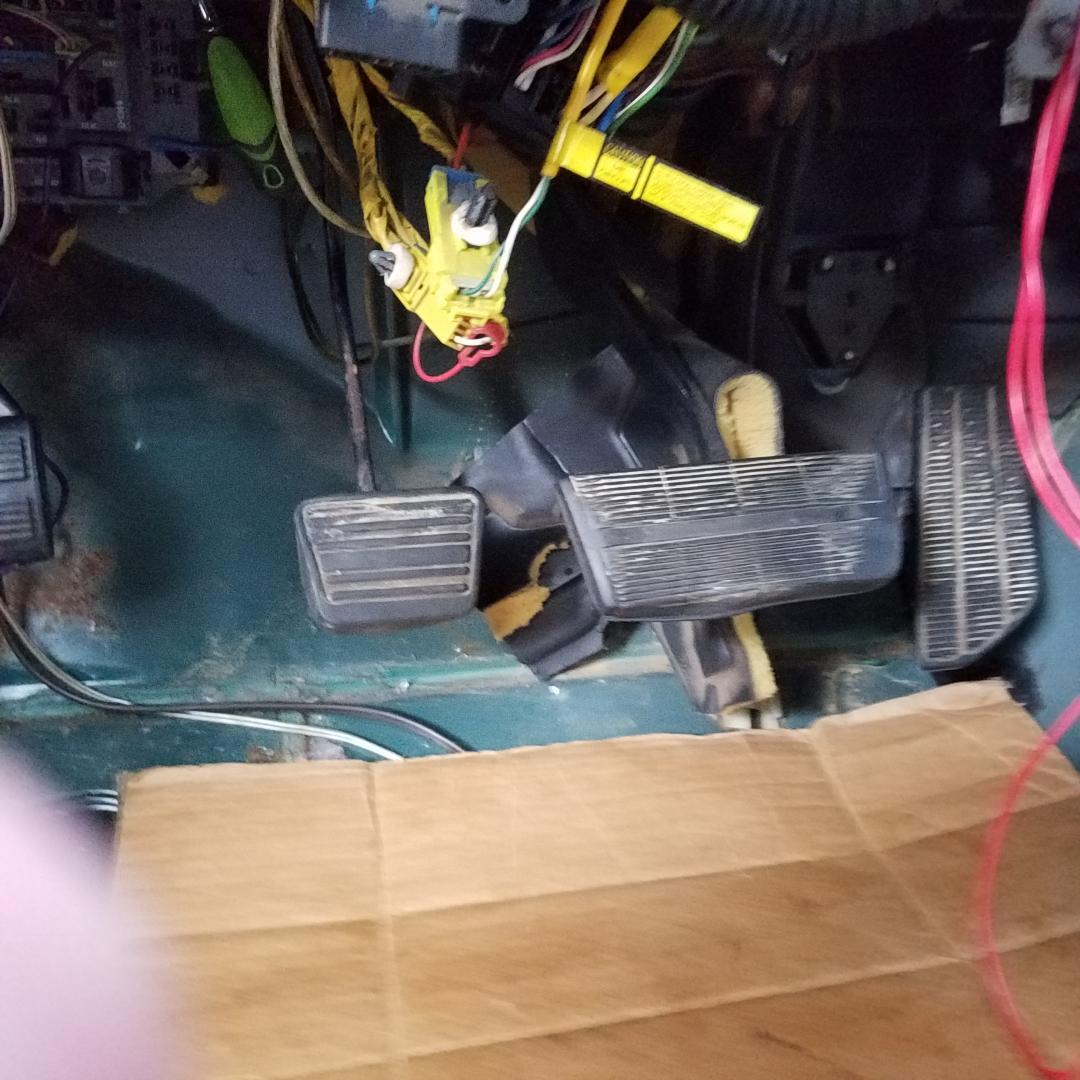 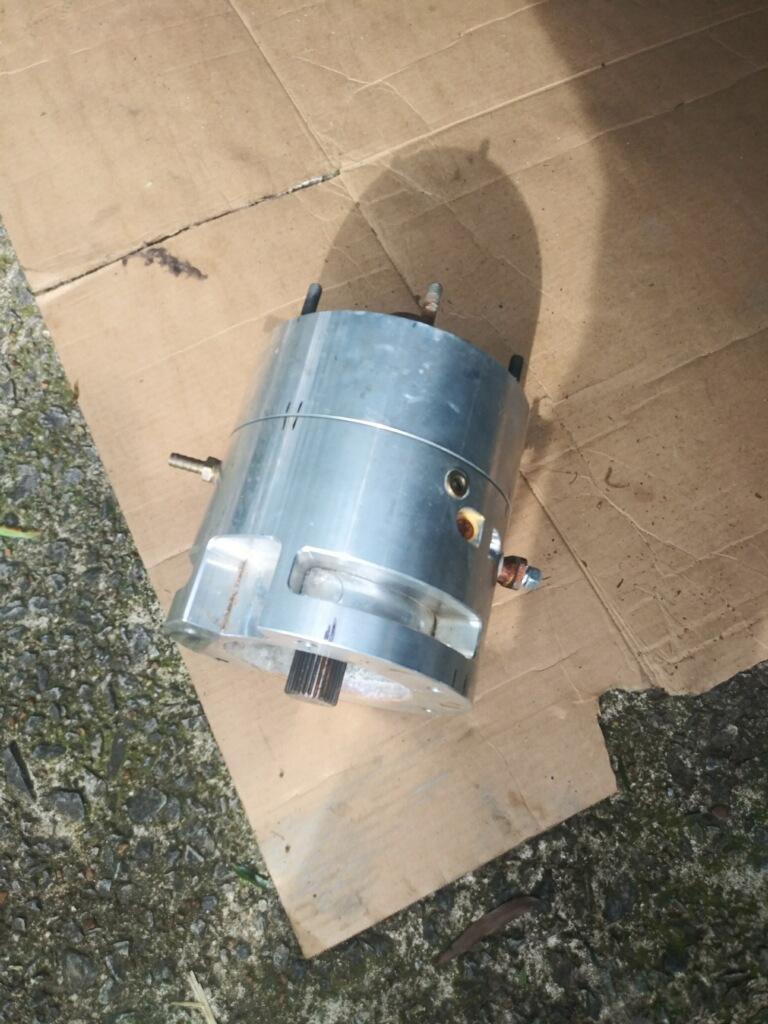 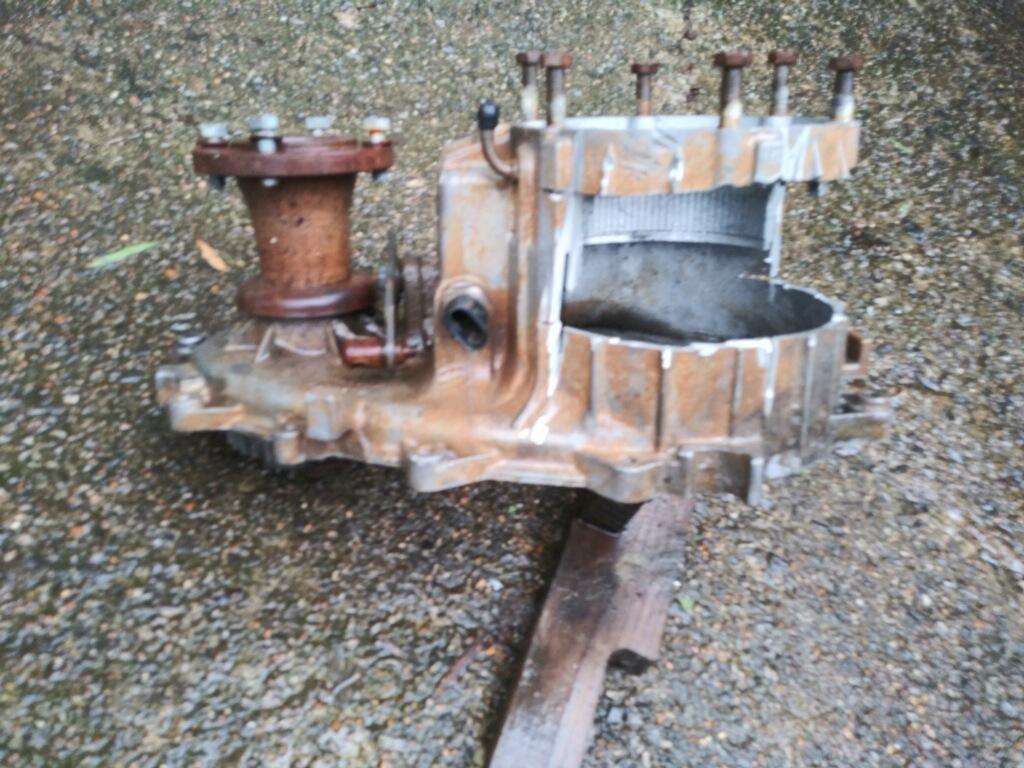 Hope your son is getting through this all man. Keep it up, he's lucky to have people like you to care for him.

The hoe is looking good though! What parts are you using? Build plans?

Thanks man. Most people understand but some don't. Kids seem to handle things in stride a lot better than adults sometimes. His self confidence has improved a TON since he started at the A.I.D.B. Amazing school. cant say enough positive things about that place.


Well the plan at the beginning was normal stuff. hp60, 14b, nv4500, nwf eco box, ford 205, cage. Planned to do a rtt and and a water tank in somewhere as well a an arb fridge. That will change a little bit this time as far as the camping part of it.

I mounted the early style clutch pedal setup since my trans is the early style low gear with a external slave cylinder. i still have to cut the auto brake pedal off. I shackle flipped the rear and just kinda tossed the front together when we moved. the rear leafs are out of a k30, fronts are stock tahoe rears. Since we have a camper now I plan to go more offroad with it and less camper. Will depend on if I try to tow camper with it or flat tow it behind truck with camper on it.


Working on a homemade ebrake setup and a couple small things to add to it.
Last edited: Jun 13, 2020 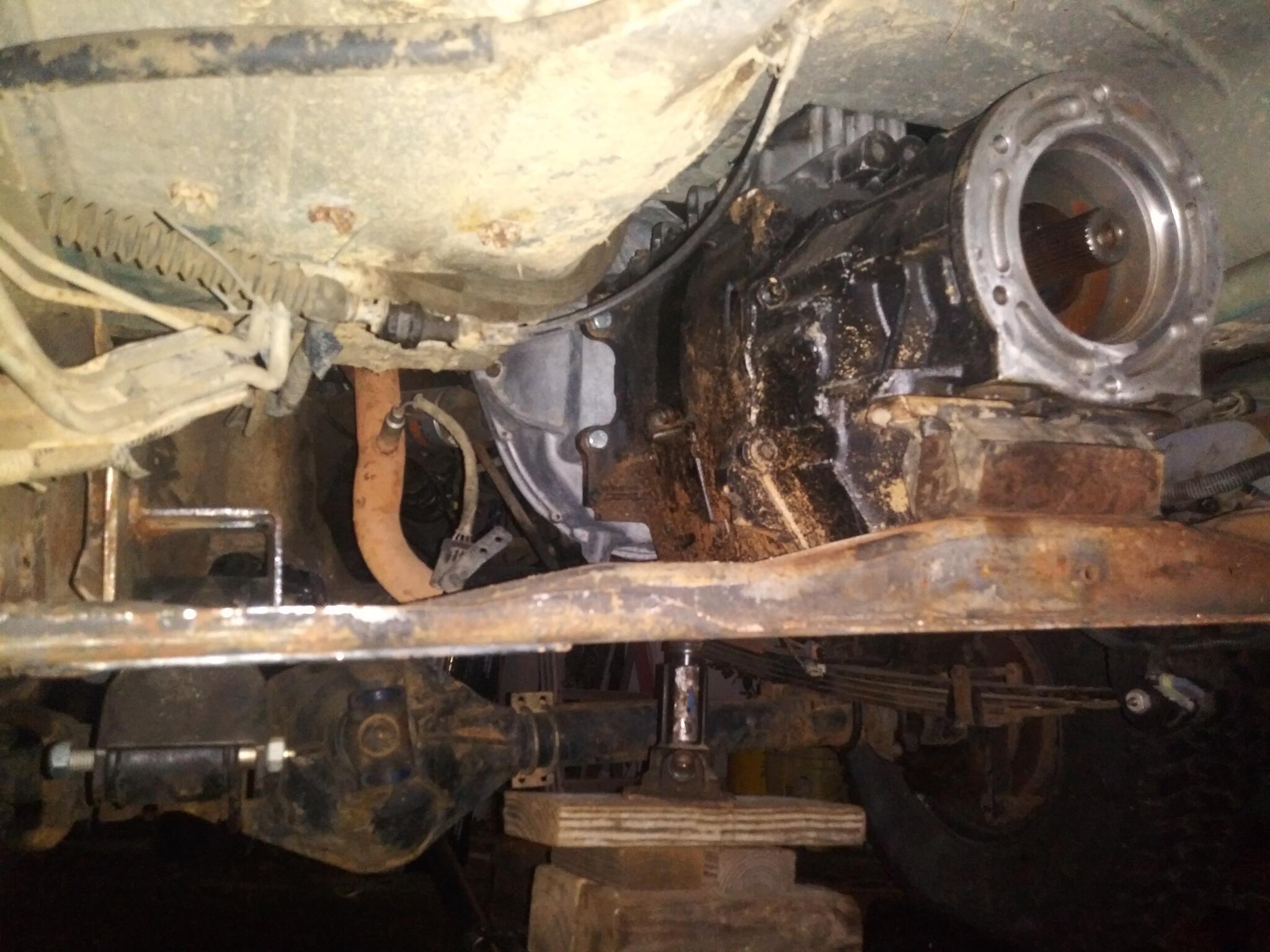 Its a pita to type anything when I load a pic with my phone. Made a little progress over the holiday. Trans is in. Should have been in last week but like a dumbass I tried to put trans in without it strapped to the jack. So it fell on my hand and smashed/cut my hand. So it was a bit sore for a few days. I going to redo the cross members with tubing for the trans and tcase. Just getting it together to take my son for a drive in it before his next surgery.
Last edited: Jul 7, 2020

Cool build. Next time use some whiskey and a strap on that trans. been there myself.
Good luck getting it driving for your son.

rattle_snake said:
Cool build. Next time use some whiskey and a strap on that trans. been there myself.
Good luck getting it driving for your son.
Click to expand...

Well does it count if I had already been drinking vodka and used it to flush the gear oil from the cut and off my hand? So of course there was blood everywhere. My wife walks out and thinks I let it fall and smash the cat because the cat was laying with me under the truck when she went inside. Fun evening all way around.

Thanks man Im trying. I broke down and ordered some parts from offroad design to speed things up a little.

My more sober attempt below. It worked much better surprisingly.
Last edited: Jul 10, 2020 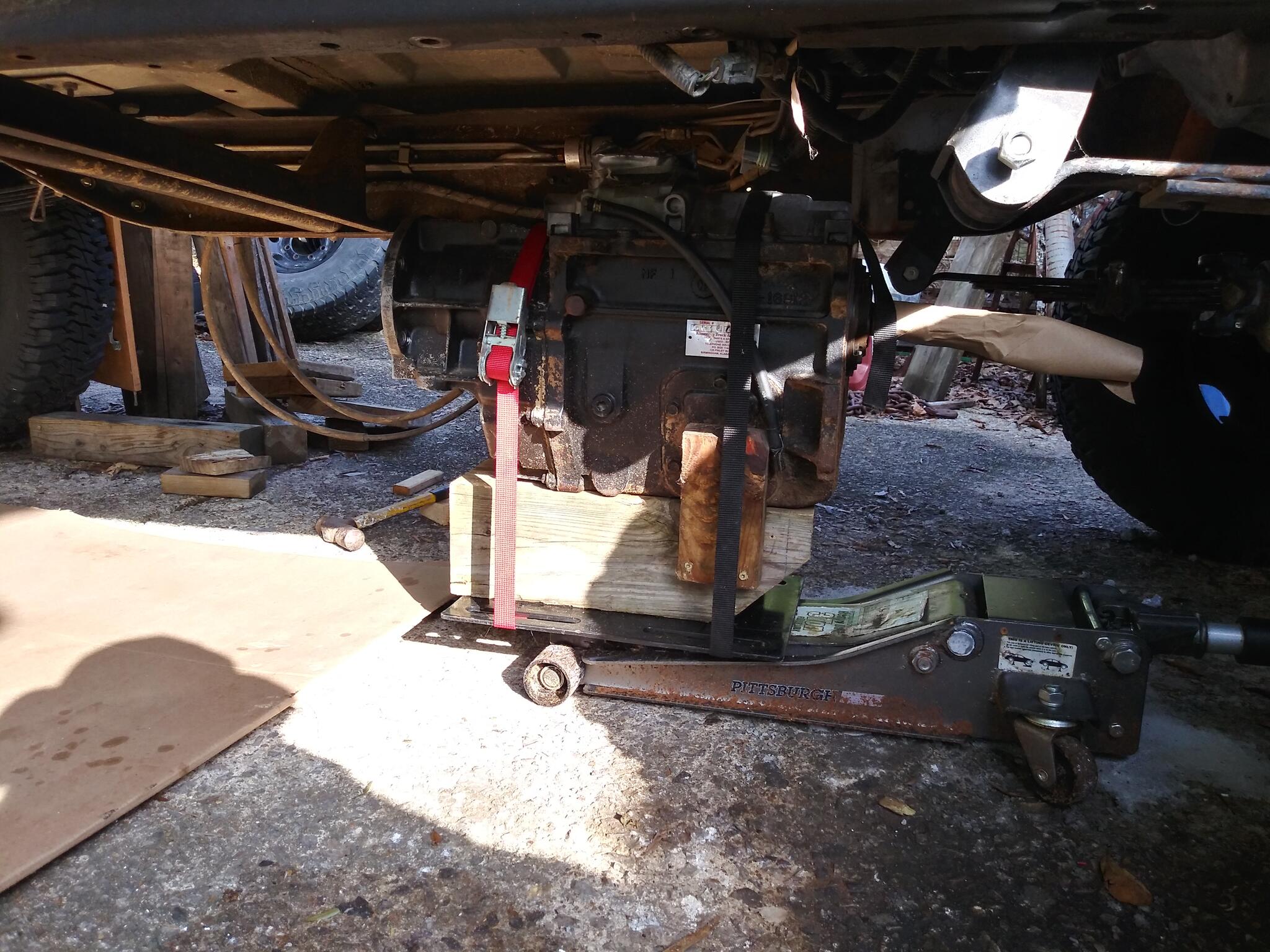 Thats my son's leg in the middle pic. He was helping me tear it down. For some reason he wants to stay in his boxers all the time when he is at home. Go figure.

Im going to finish stripping it down and do a little trimming on that mount. Then reassemble it with new bearing and gaskets. When I put that rear output housing on it I noticed all the sludge in it along with all the debris stuck to the magnet. So figured it was time for a refresh job. 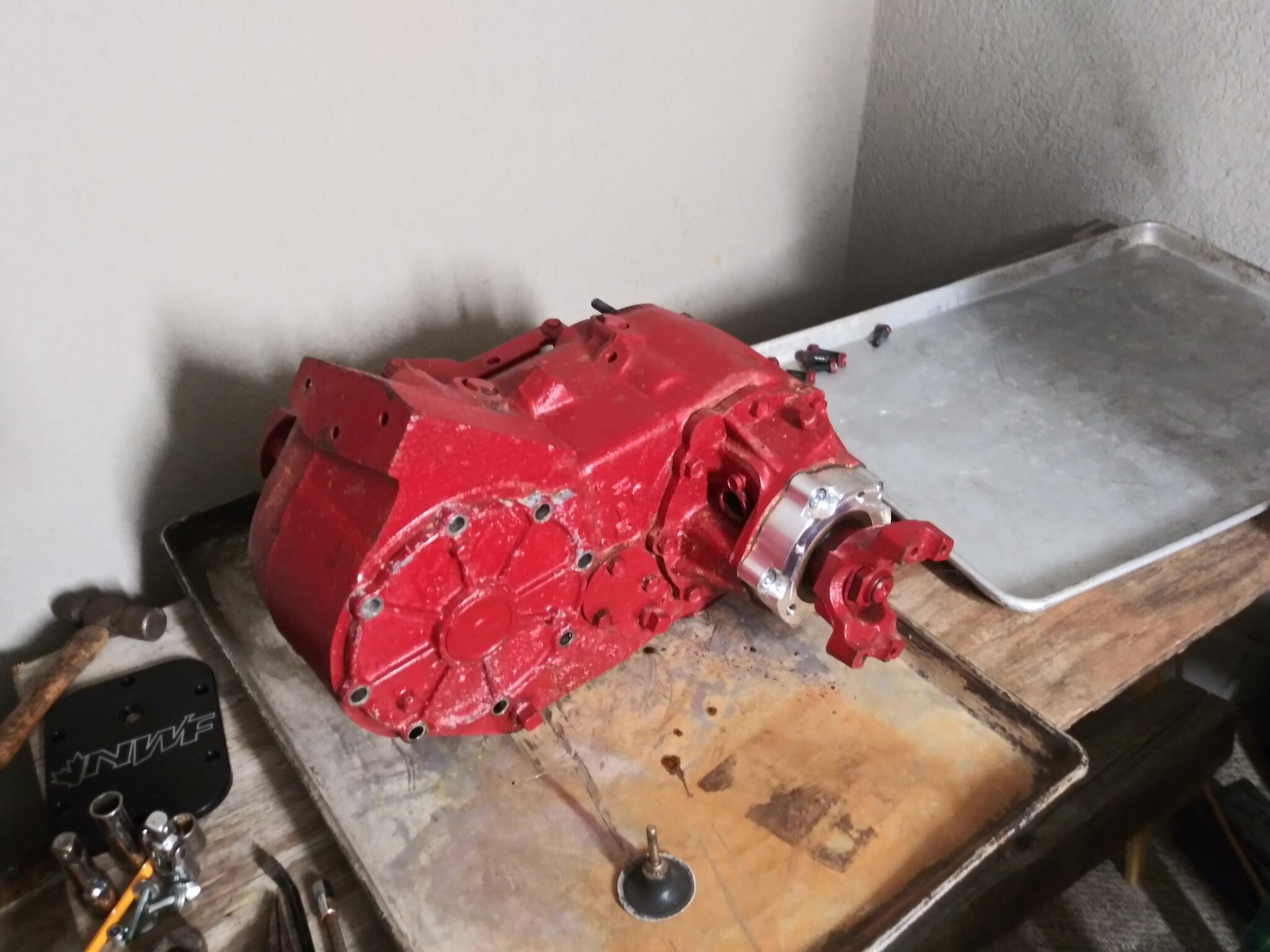 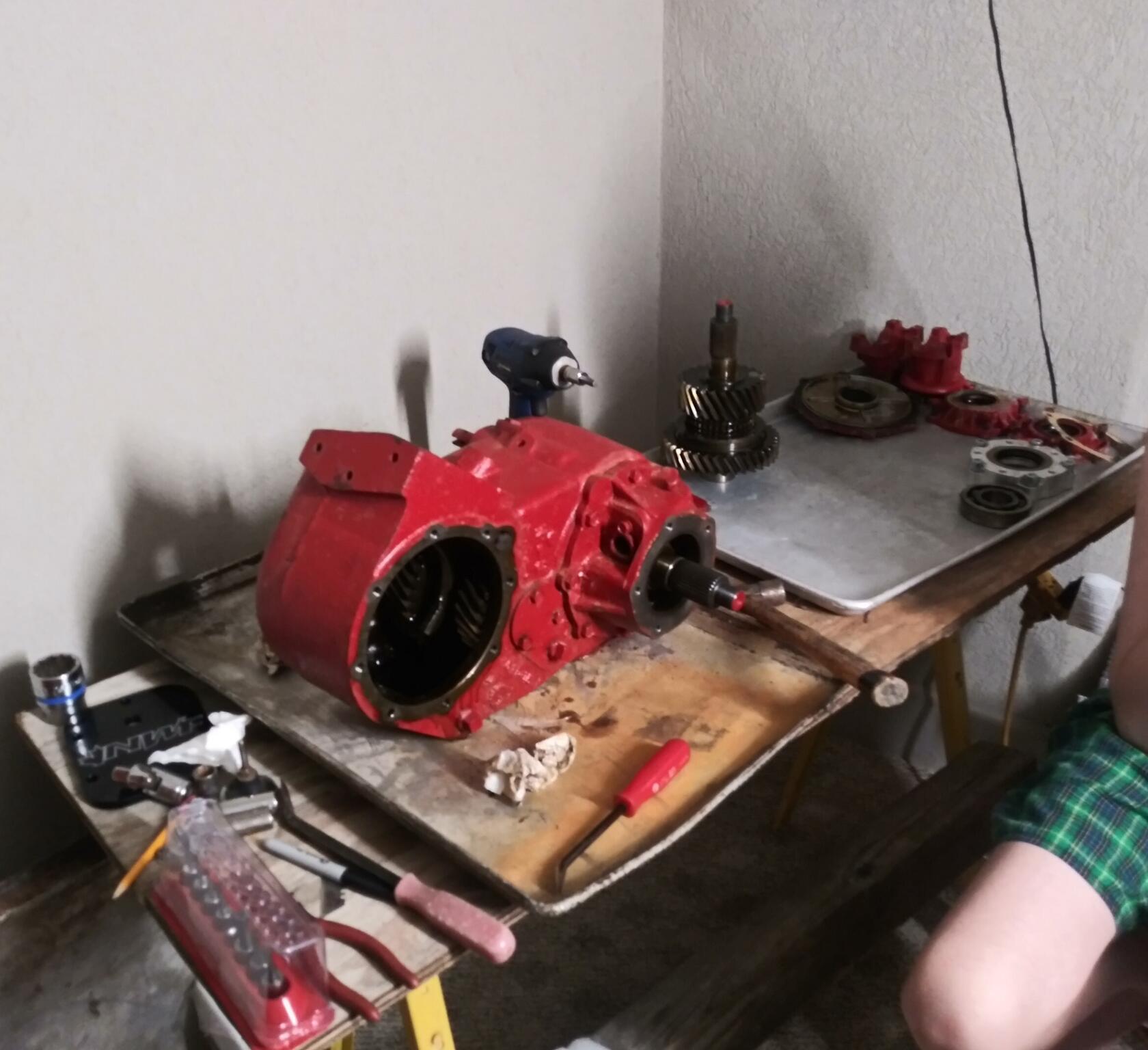 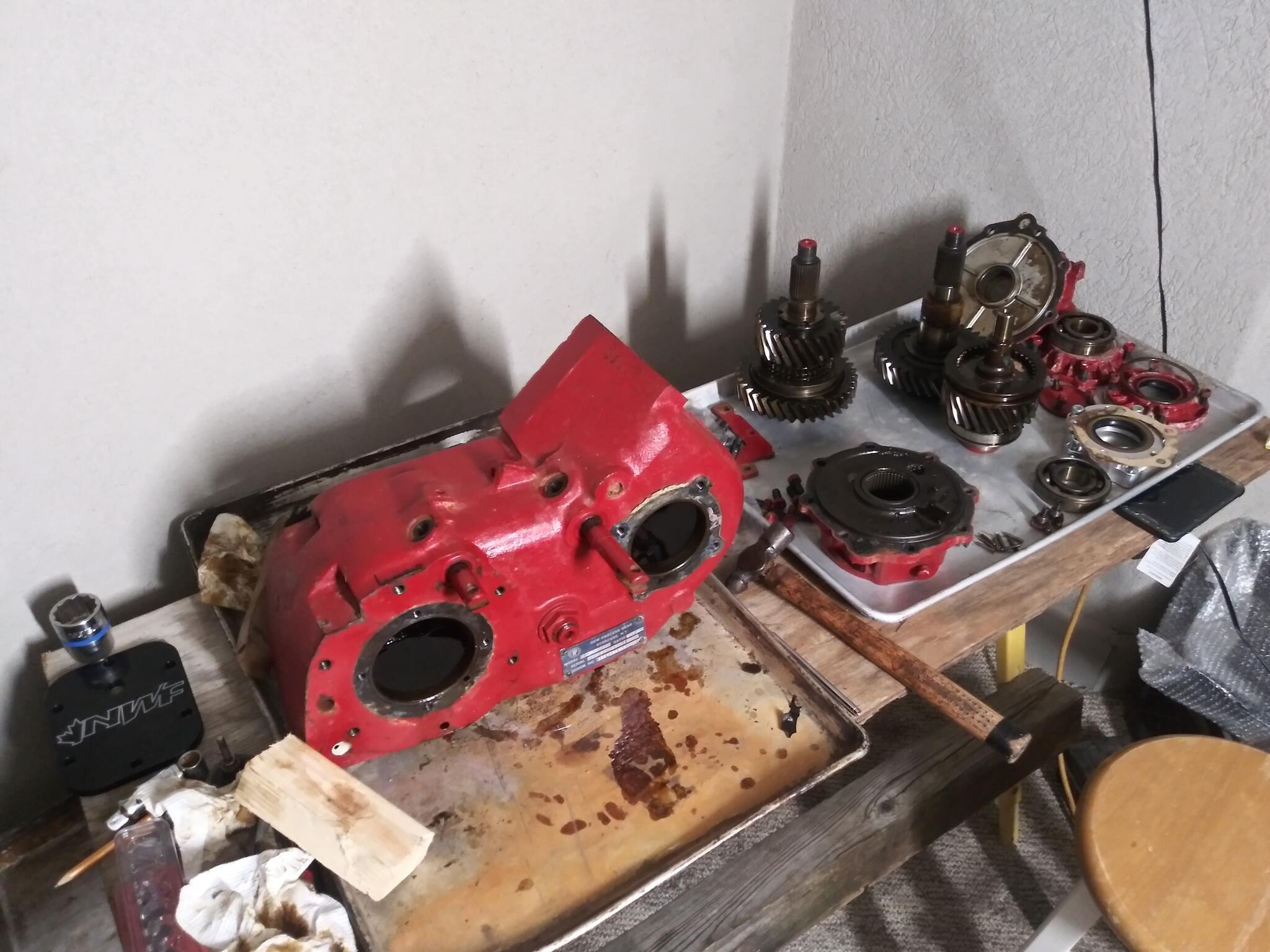 Looks good. I've got an NV4500 and 14-bolt to swap into my '94. Have been considering options for an SAS as well. Will be following. 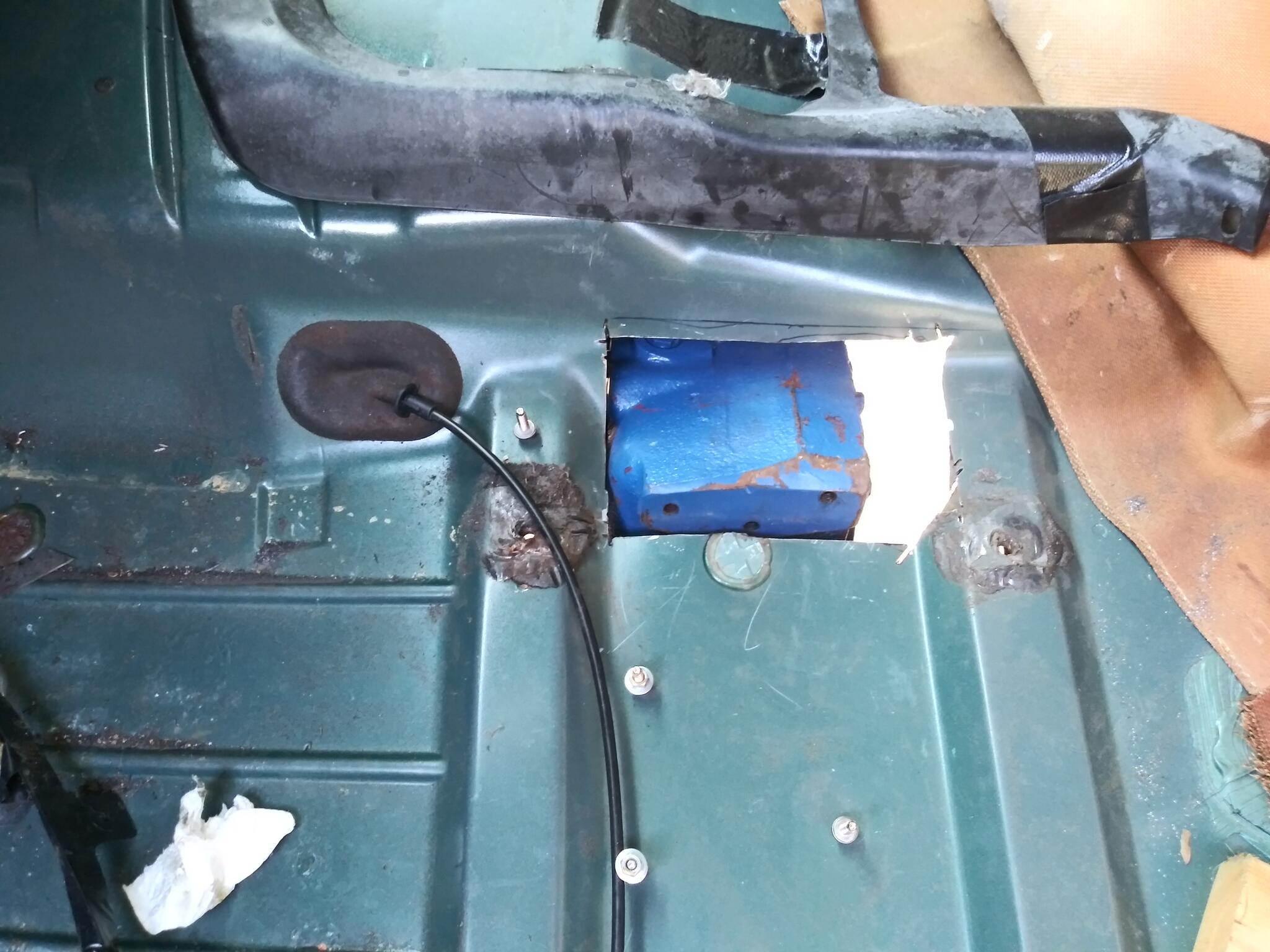 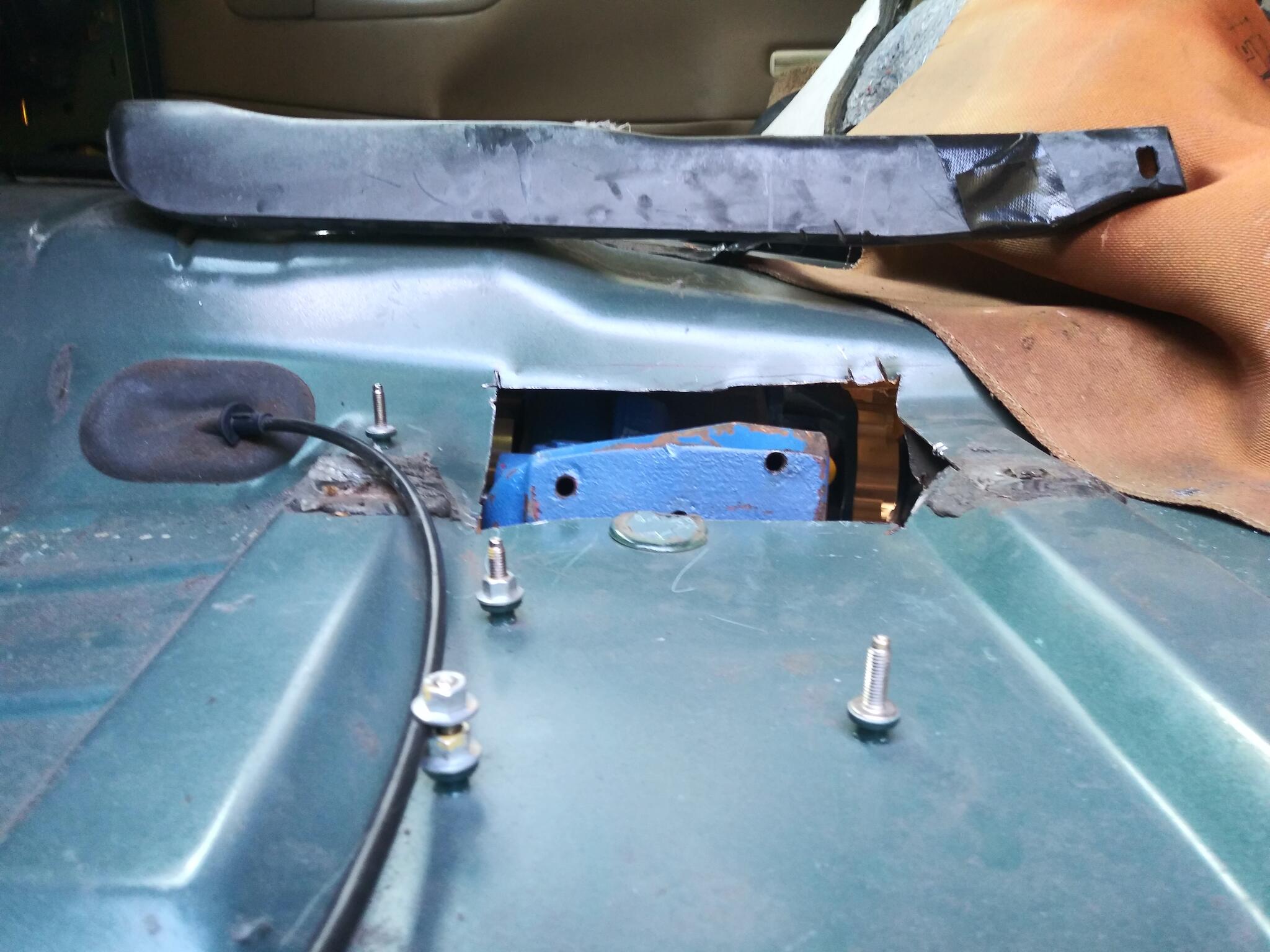 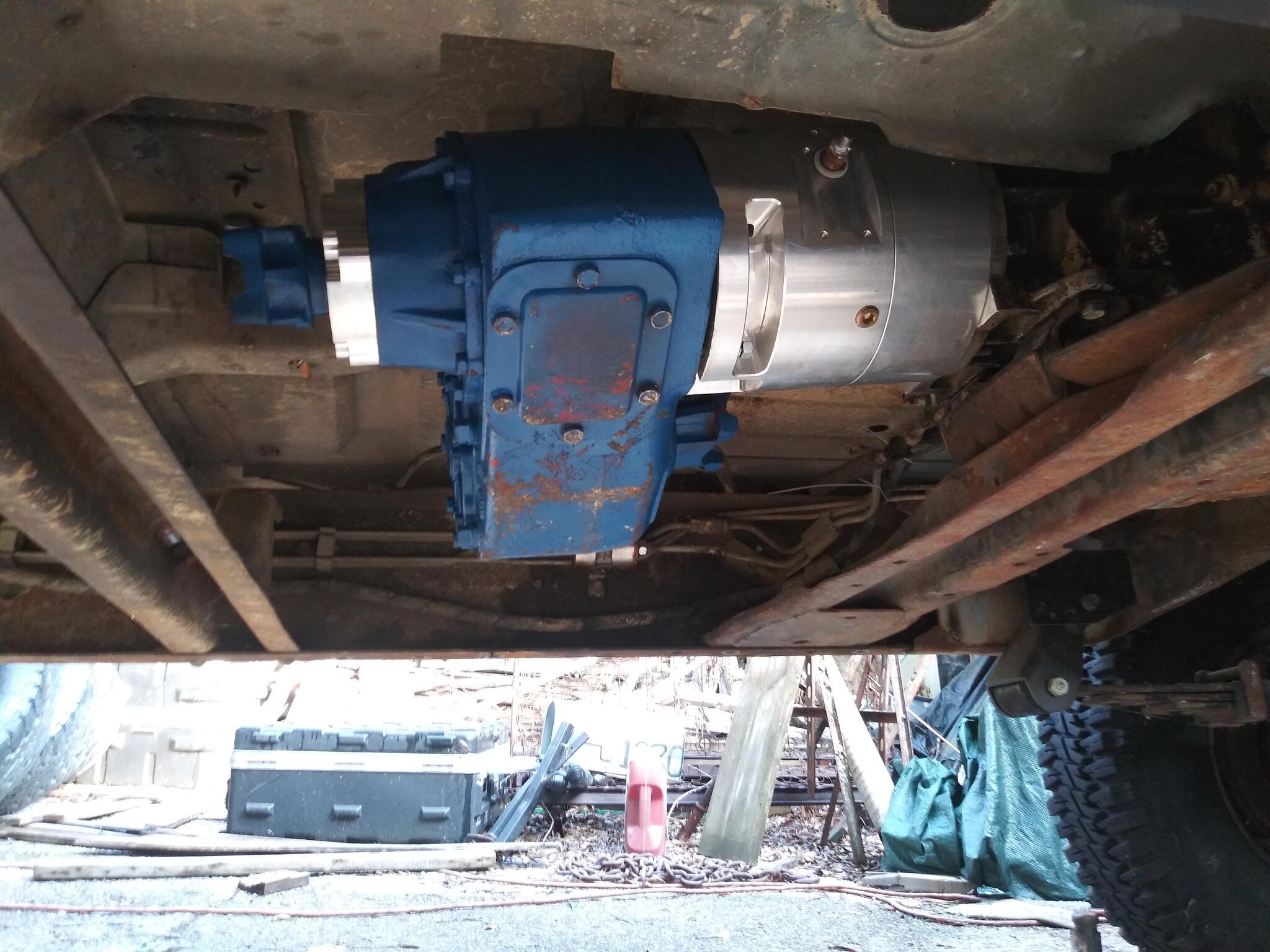 I will clean up that hole and make a cover for it. That is just easier for me than cutting and plating the case. I did trim a little off the top edge, but made sure not to go to deep into the case.

I dig the two door. Keep the updates coming

So I know its been a while since I posted anything on the tahoe. It may be a little longer as I finally ran up on what I wanted from the start of all this. I still haven't decided if I'm going to rob the tahoe of all its good parts for this or what yet. Should be some progress one way or the other soon.