had to do it when the cat decided to browse the internet with me.

I did not pose him, he did this himself.

Damn your socks are the same color as your cats feet

FlexyTJ said:
Damn your socks are the same color as your cats feet 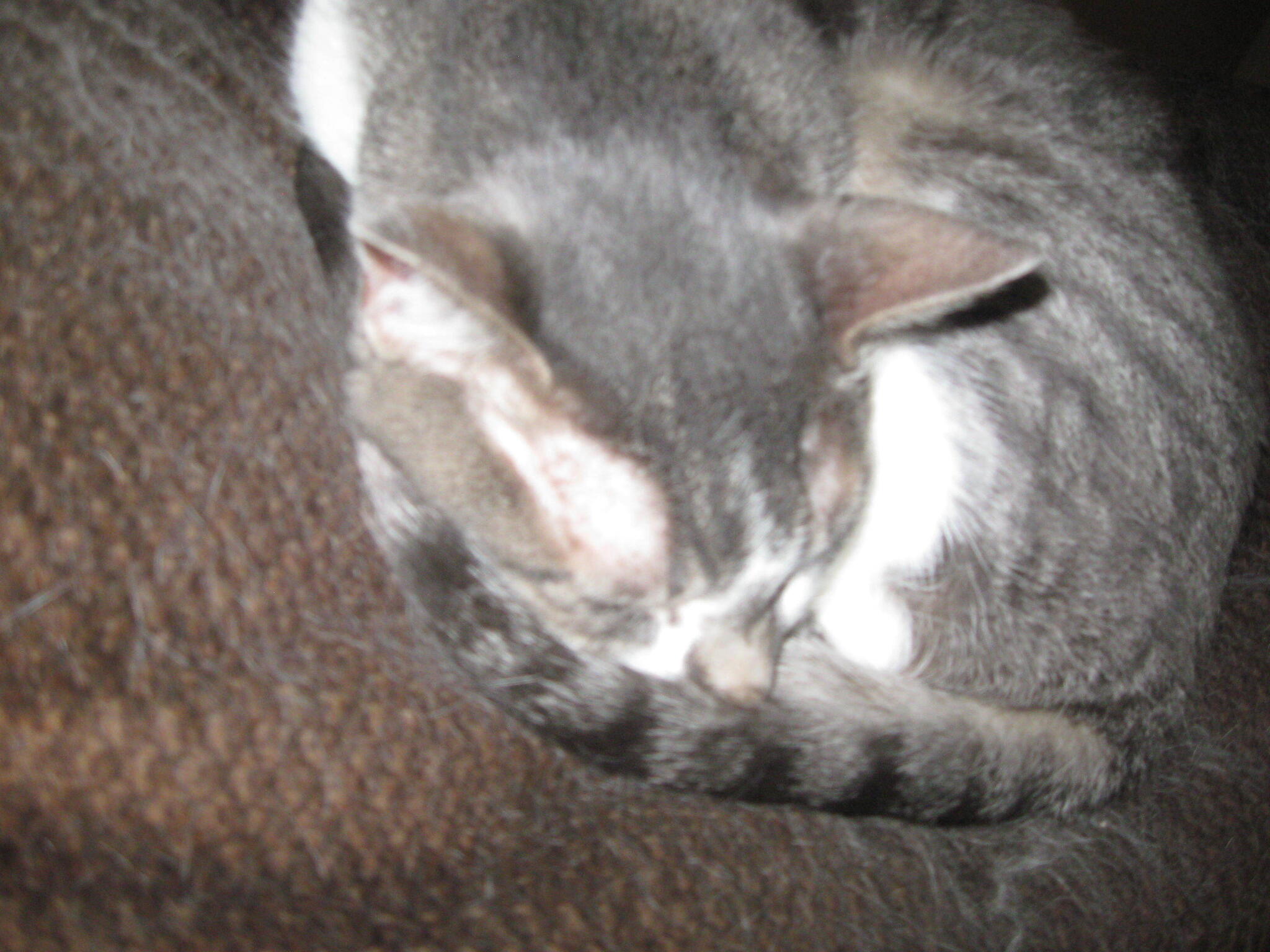 in, any asshole can buy a dogs love. it takes a real asshole to subdue the wild cat

also, medium looks to be a decent image size to upload.

The wife brought this little thing home the other day. Our 17yo bengal is tolerating it. My oldest kids cat is a tabby and weighs 17lbs. It's not fat, it's just a big dude. So yeah, with 3 cats I guess that makes me a crazy cat lady. 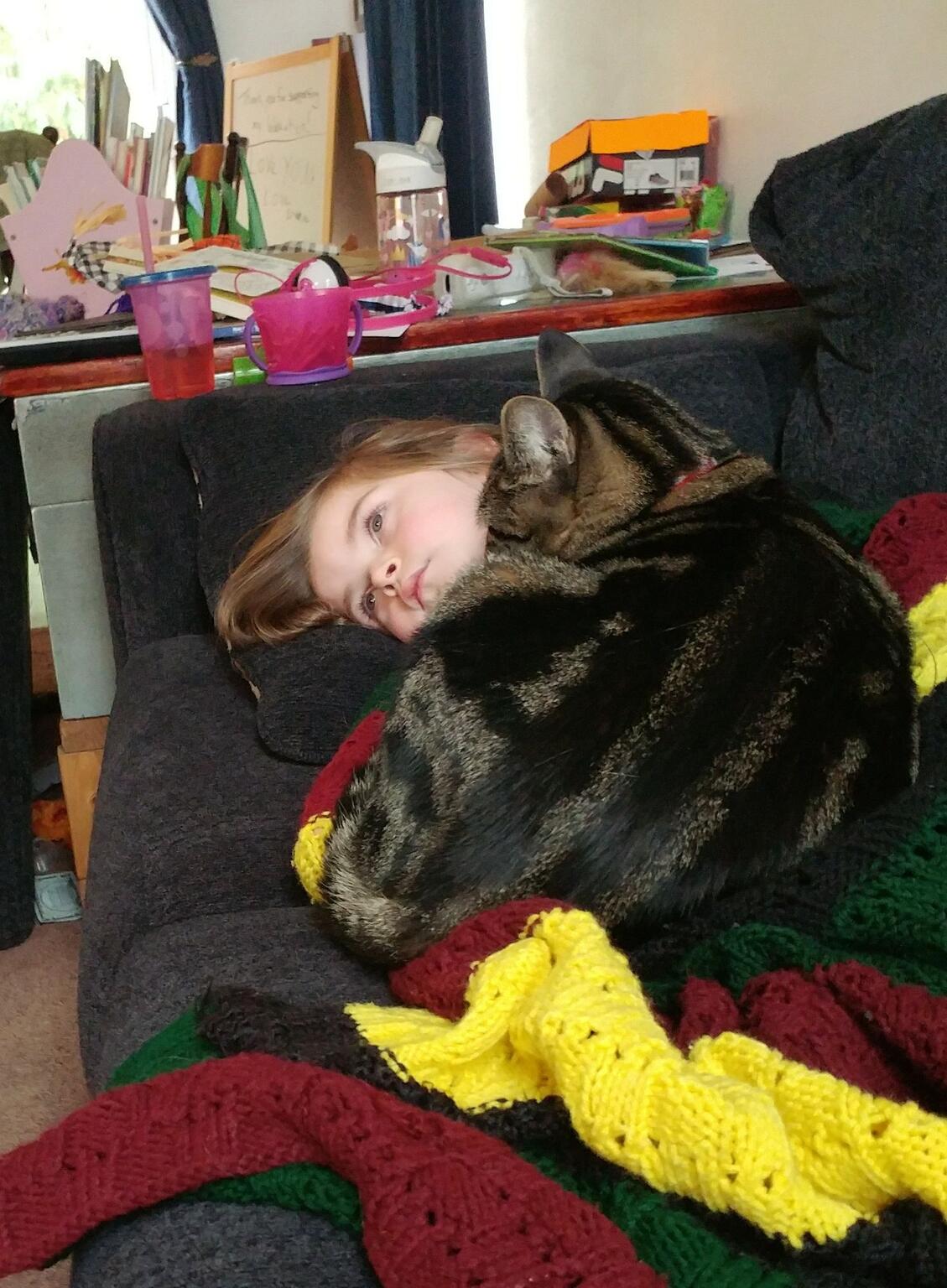 Here's my 2 asshole feral cats turned pets and some feral kittens that were born in one of my cars at work that I'm taking care of. I fucking hate cats but somehow I attract ferals like crazy. Raised probably 2 dozen in the past 3 years. 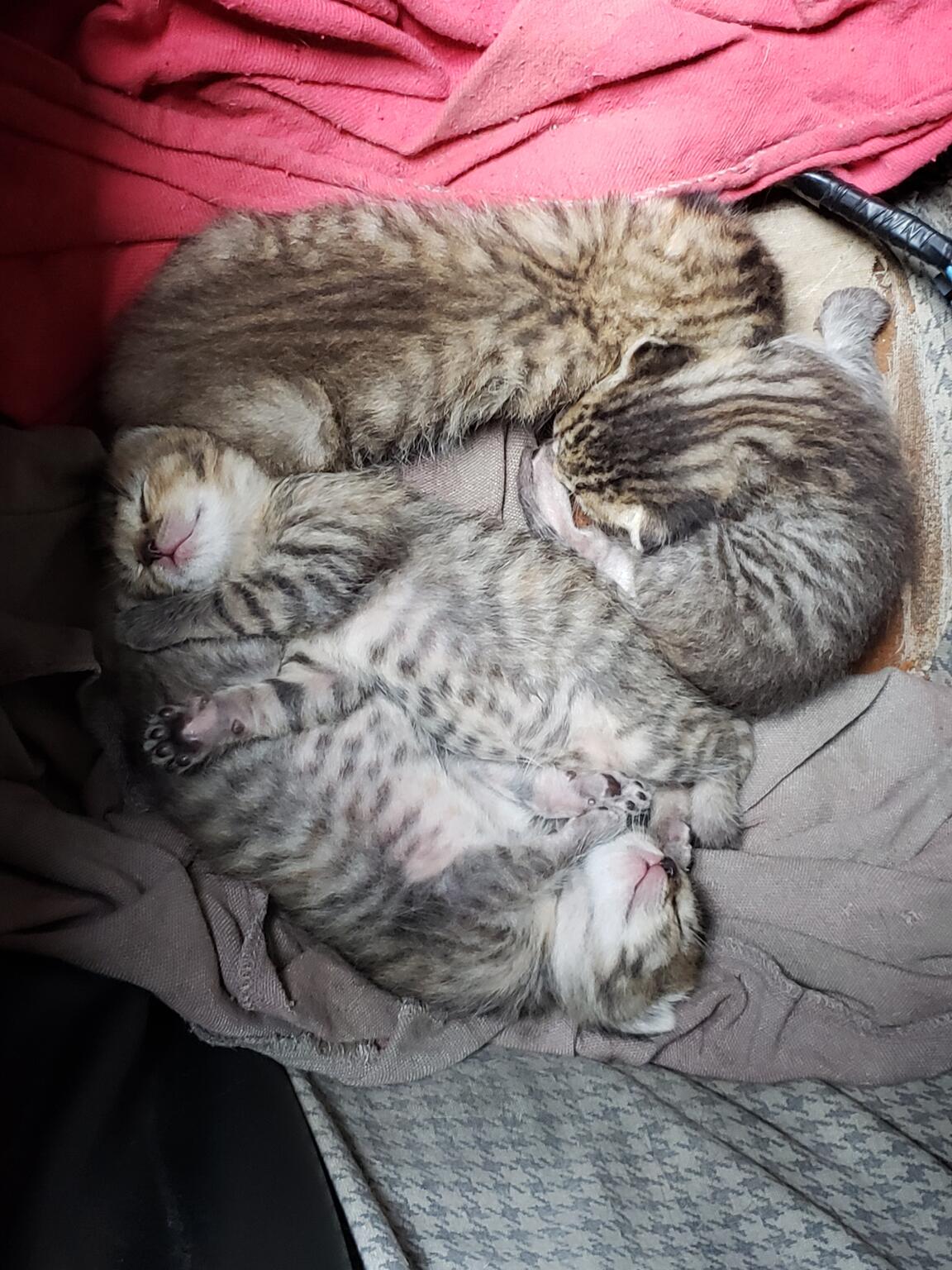 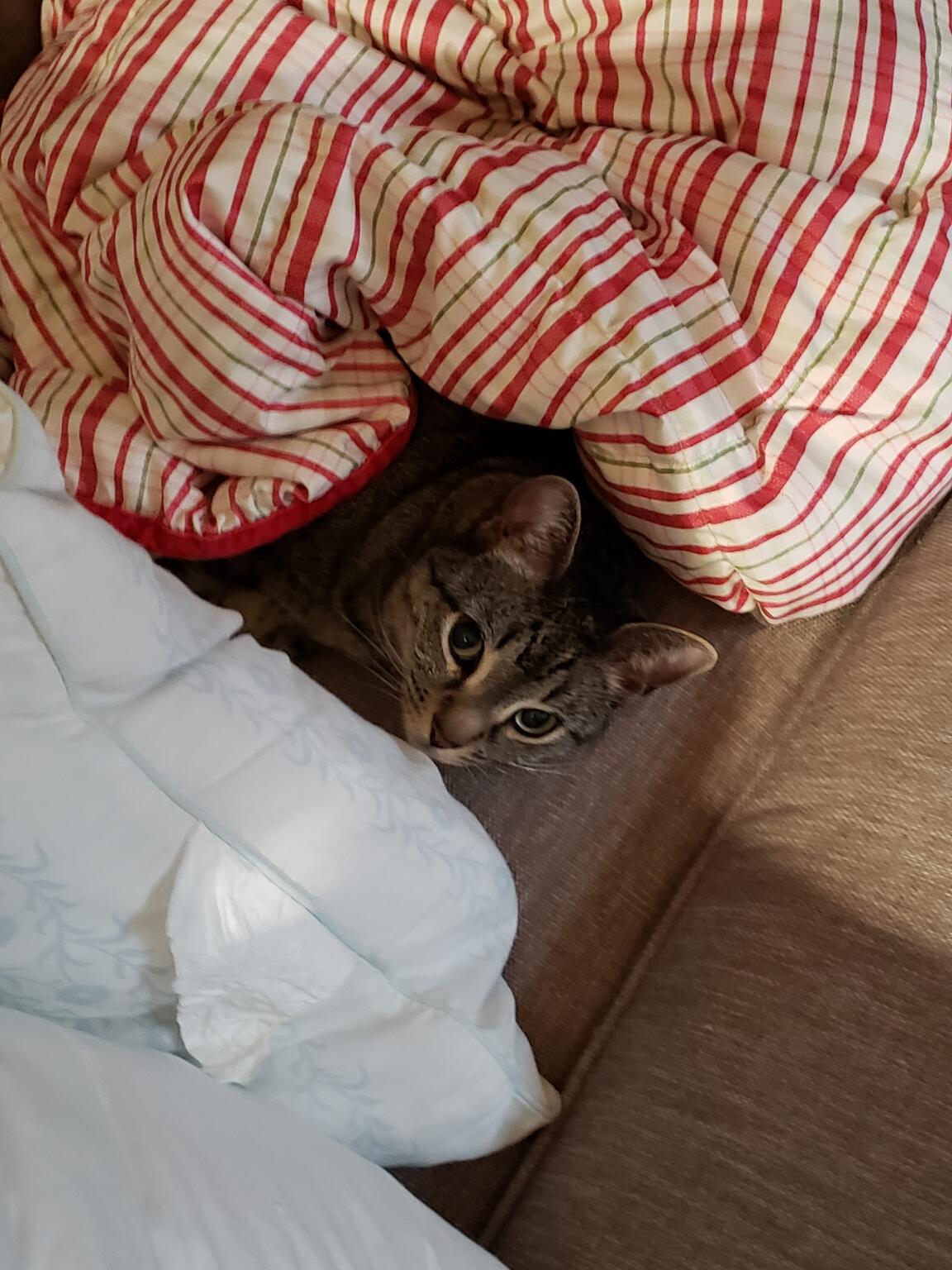 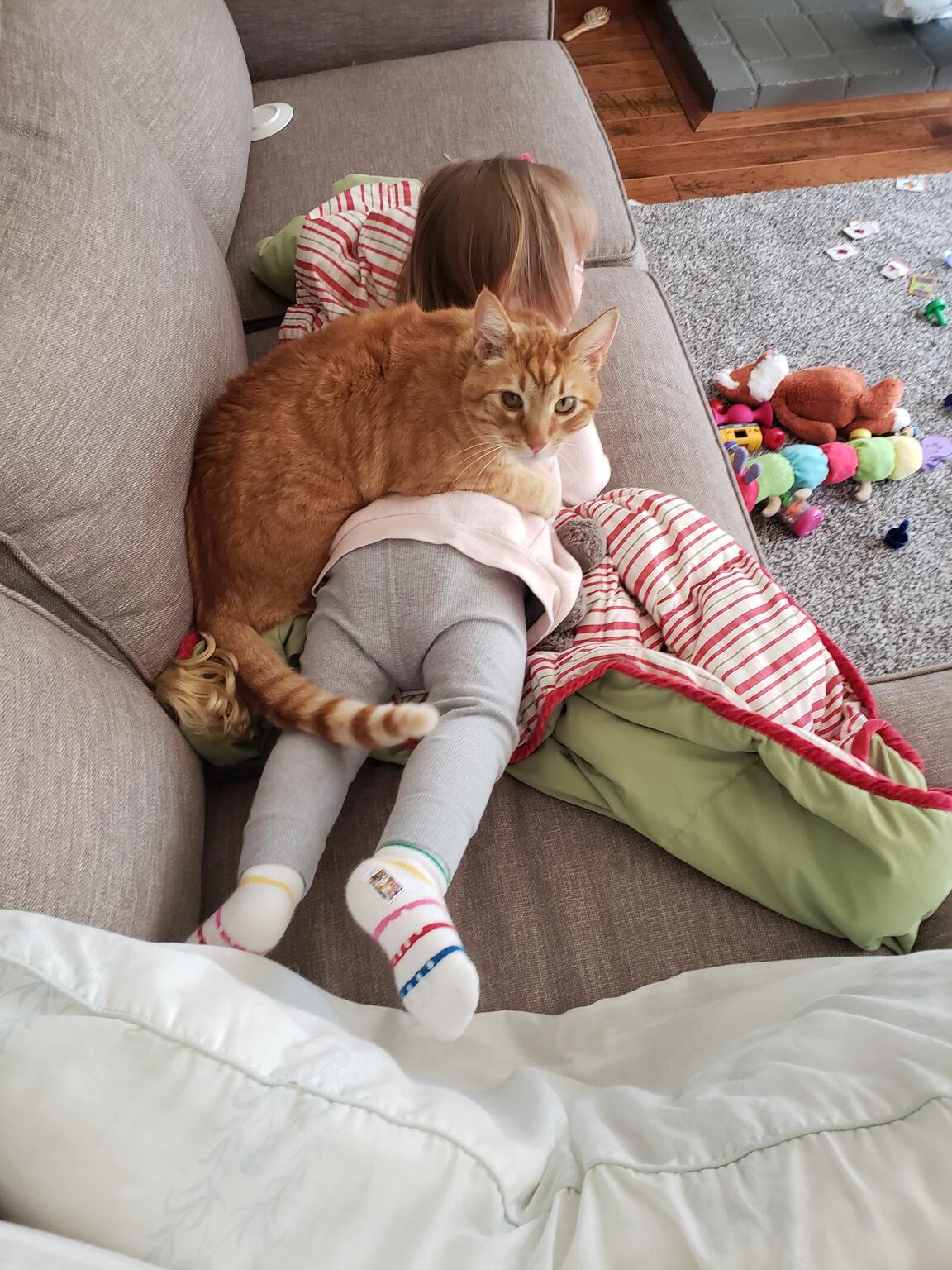 Better photo of how big the tabby is. He's dumb as a fence post. The bengal rules the roost but is a total asshole. wow, our cat's not big in that he only weighs 11lbs, but he is skinny and long. i'm excited to have a barn again, so that i can have barn cats

@yoszi, give me a few more years and i'll take all your hardassed inner city cats. spay/neuter them, then toss them to the field to keep all the things too large for the chickens to eat away 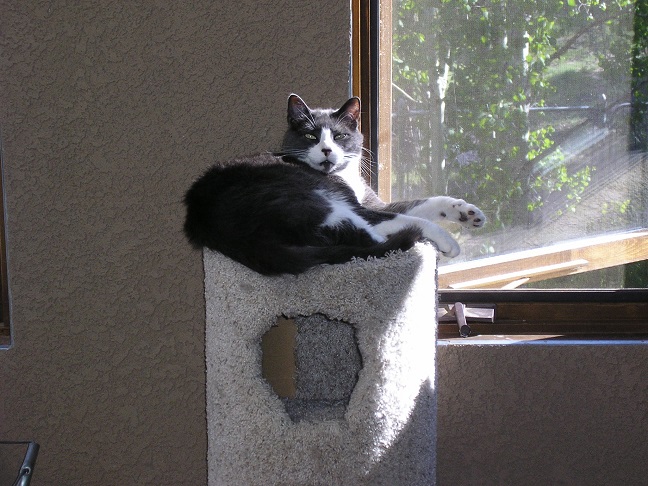 My wife's cats - they're usually pretty good.
Kaiser (the red one) and Callisto (Tortie) - both are almost 2 y.o. and the red one now weighs in at almost 20 pounds. 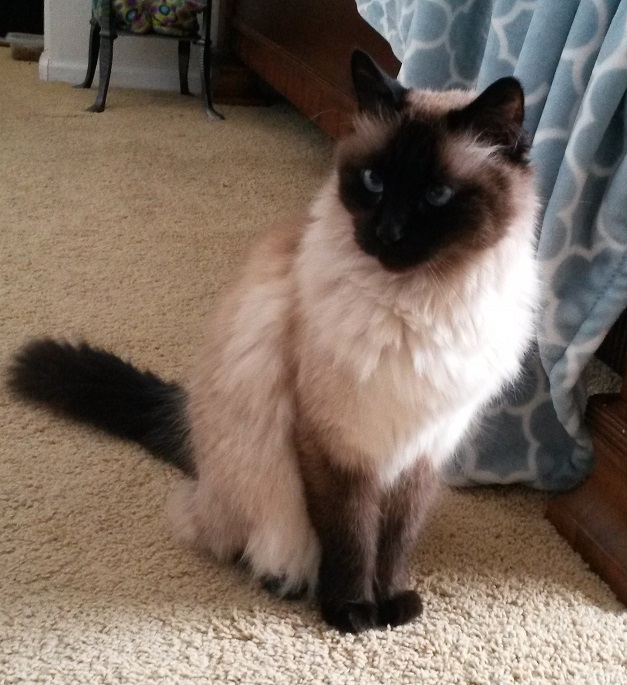 Bean was born under an abandoned single wide. She's a good cat. Takes no shit. Cornered a buddy's wolf dog in the living room and had her pissing on the floor in terror once. Wit h 8 German short hair pointer bird dogs we have a couple of cats that did not make it. My daughters cat named river, because we found him while tubing the elk river in Gasaway West Virginia. He had a good 7-8 months. She Washed him in the shop sink every Sunday. This was his last bath.

Ninja lives in my shop. He is the cat that has lived the longest here. He is 7.5years old. Ninja is my cat, but I let my woman pet him.

Picked up Red from a cat shelter in Fruita CO in 2008, he was a very touchy feelie kind of guy. If I was on the computer he was wrapped around my left arm asleep, came home from a wekend trip in 2016 found him dead on floor looked like he had a heart attack midstep.
It's about time to search for another this time I am thinking about a pair. I have been catless long enough, mom's just tolerates me. 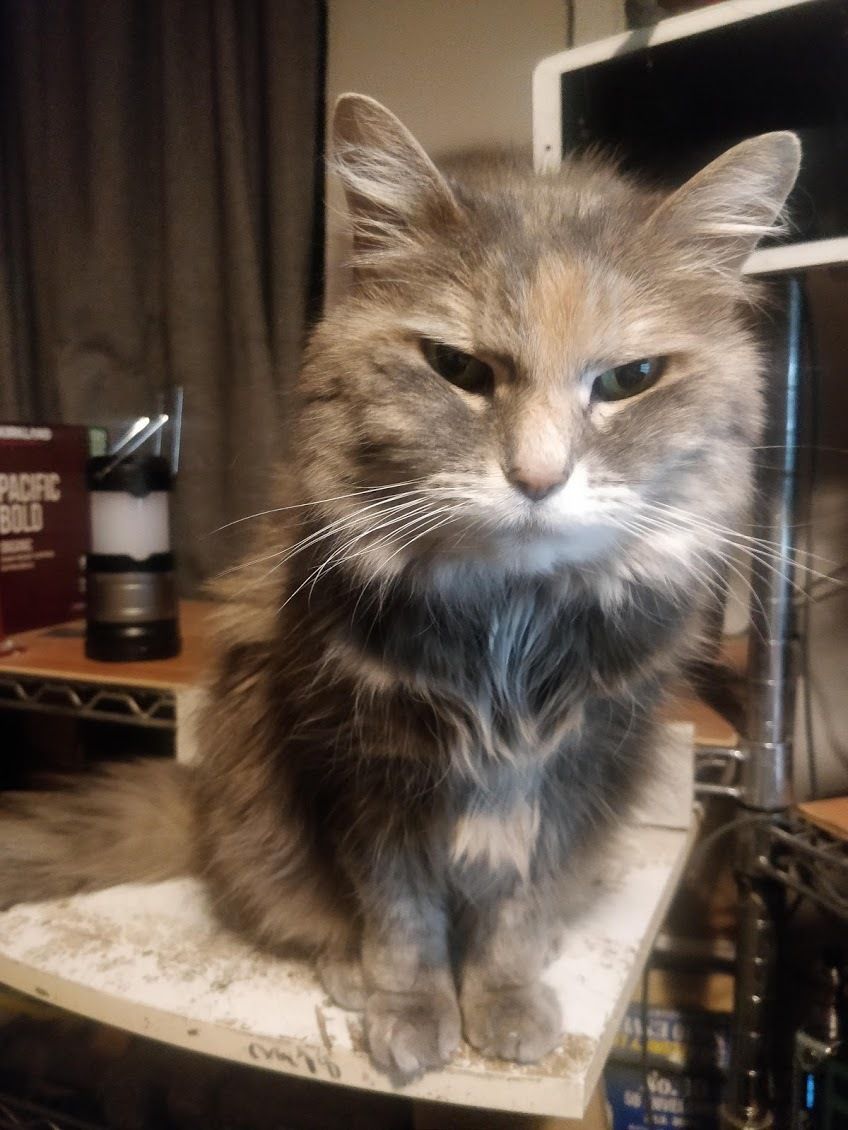 My main coon who thinks he’s a dog more then a cat so I named him Spike. He’s getting old now. Got him from a rescue shelter, he picked me. He’s strictly an inside cat but I take him out because he likes to eat grass Landslide said:
Got him from a rescue shelter, he picked me.i/QUOTE]
LOL Red was the same,
Click to expand...

My KC girl has outlived all my other cats. She turns 21 sometime next month or so. She’s weird and has her quirks, but now she’s all alone, so she just sleeps in her spot all day. 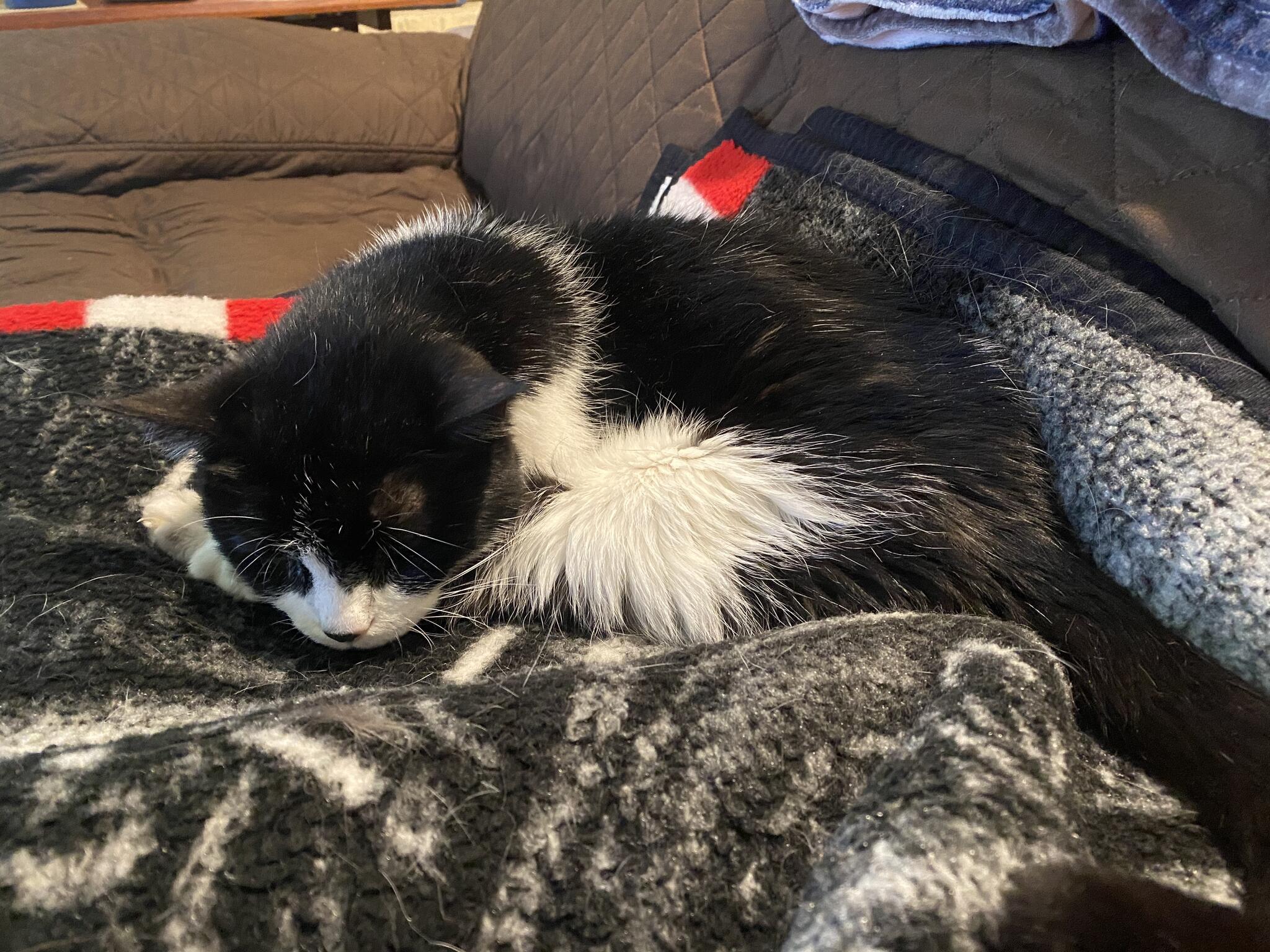 Here's a viscous hunter at work! 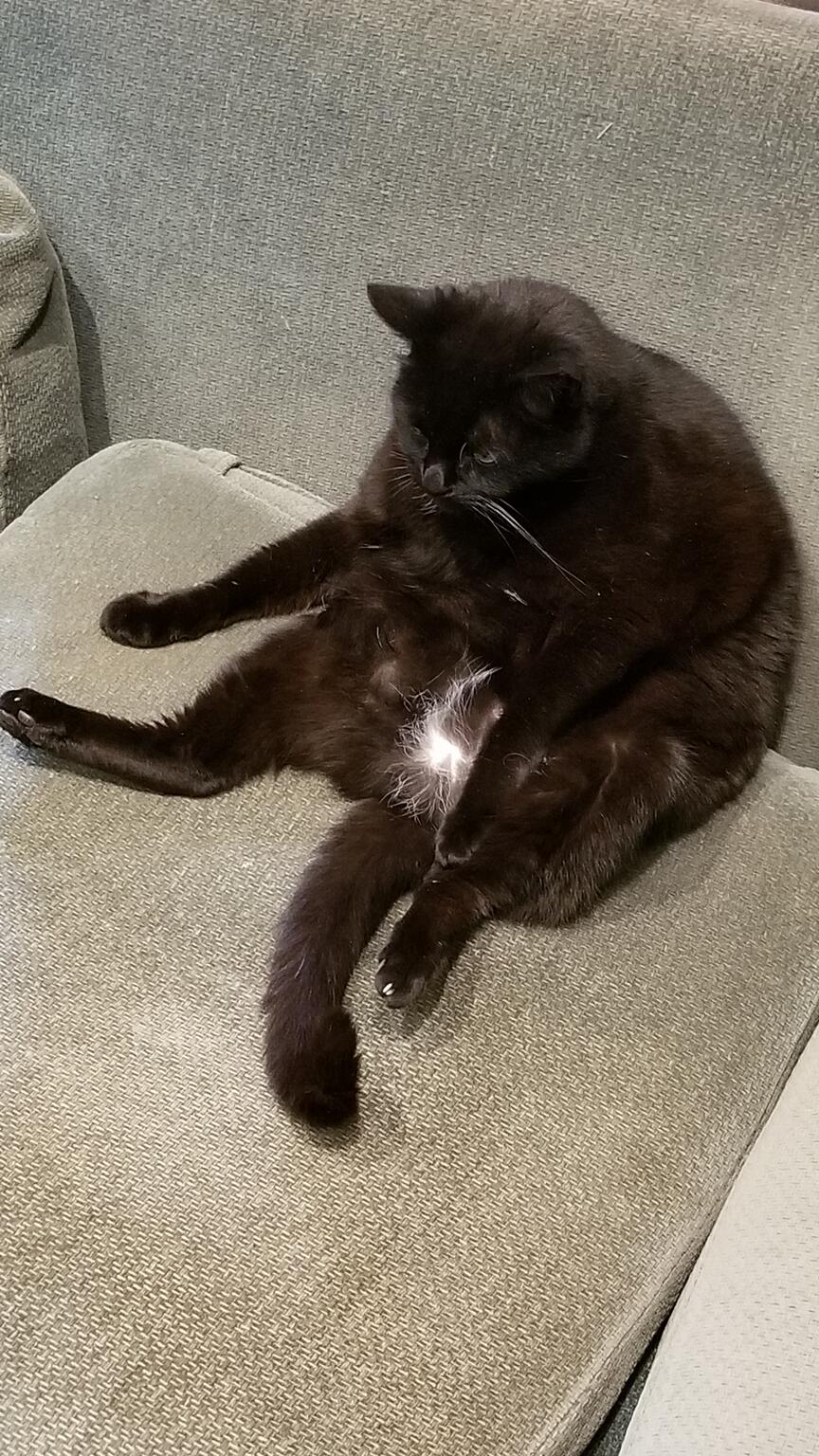 My new place came with some barn cats. I do my best to keep them in line. TSEJEEPER said:
Not sure if this will work. My buddy Russel doing a Cat Scan of my Jeep. https://www.facebook.com/sally.a.eva...7527731571857/
Damn it I am not sure how to post the video with out going to face book.
Click to expand...

Welcome to the shit show. Also Munge, my cat. Passed away about a year ago. I was cleaning out a crack house and this tiny little blue eyed kitten was walking around squeaking. I asked a tenant that was moving out and he said "My new place doesn't allow cats, so I guess this place comes with one!"
Well fuck, I don't want another cat, but I put her in a box and brought her home. She stunk so we tried to give her a bath. The water turned red, and her head was boiling with fleas.
We ended up taking her to the vet, who refused to keep her because her infestation was so bad. They wanted to know who had had her before and charge them with animal cruelty for the shape she was in.
She'd been being fed people food, and kept wanting people food her whole life, earned her name by stealing food from my plate. We had an 80lb pitbull at the same time who wouldn't touch a steak on the coffee table. Munge would steal that steak without a second thought. She would snuggle under the blankets every night, for a couple of minutes. My wife and I separated for awhile, I dated another chick. Munge didn't like her and when she left, the cat would get up on the couch where she had been sitting last, and hold eye contact with me, and drop a single turd, then go to her litter box and finish her business. Sending a CLEAR message. Good, we know all the toxoplasmosis infected guys.

Don't let your cat on my property. I will shoot it with my base-model ruger 10-.22 with a cheap 4x scope and I'll kill it with one shot . It will feel no pain, that .22 plowing into it's chest cavity is essentially a headshot, it'd be like a 105mm shell hitting a human in the chest, the hydrostatic shock will drop it instantly.

Cats are an invasive species and not a single person here has business owning one. You are all shitbirds. Fuck your cat. And fuck yout pitbulls. 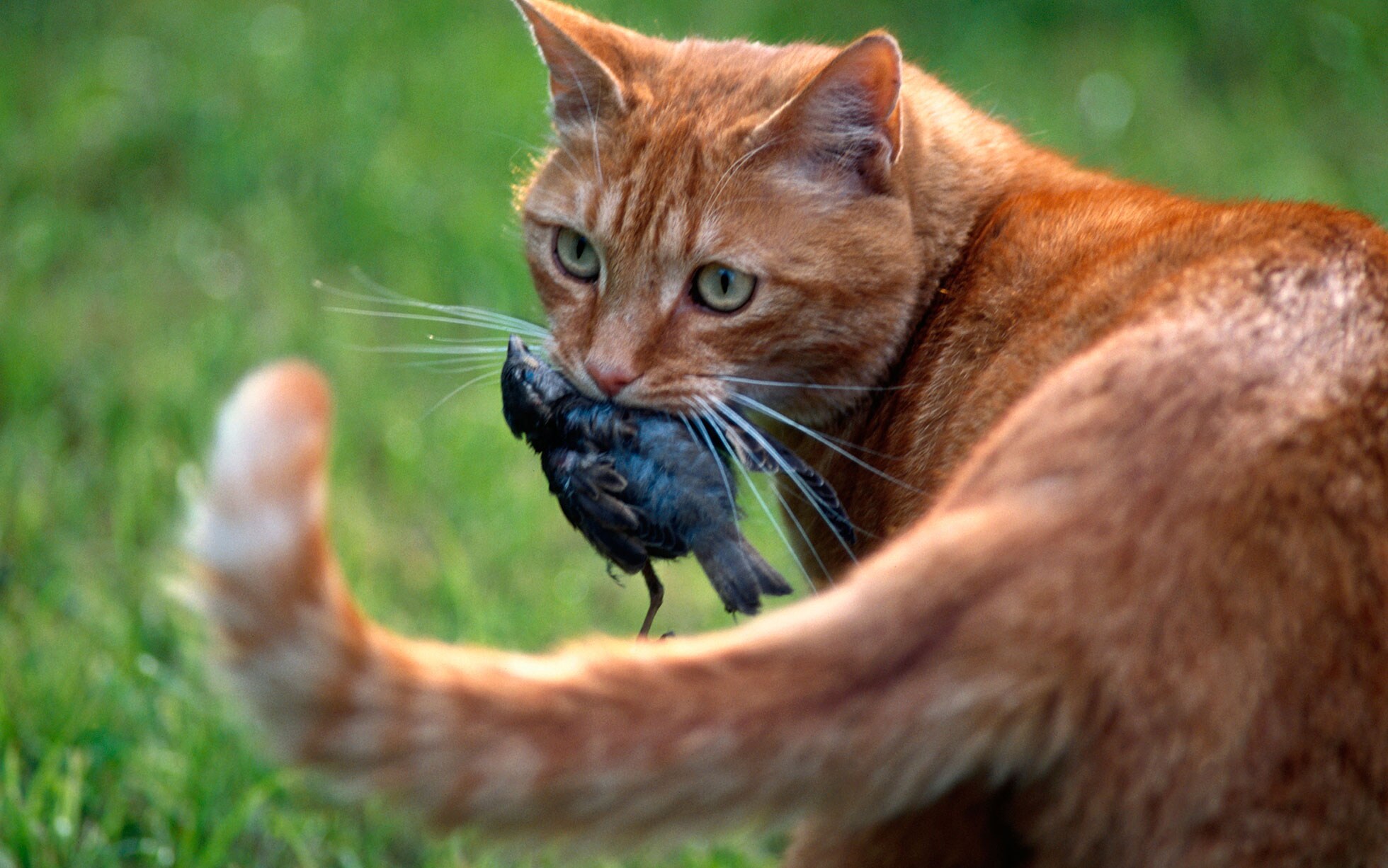 STFUEverknob. You'll shoot your eye out.

evernoob said:
Good, we know all the toxoplasmosis infected guys.

Don't let your cat on my property. I will shoot it with my base-model ruger 10-.22 with a cheap 4x scope and I'll kill it with one shot . It will feel no pain, that .22 plowing into it's chest cavity is essentially a headshot, it'd be like a 105mm shell hitting a human in the chest, the hydrostatic shock will drop it instantly.

Cats are an invasive species and not a single person here has business owning one. You are all shitbirds. Fuck your cat. And fuck yout pitbulls.

You are so full of shit dude