What is the hole infront of the bearing cup used for on the v6 to RF1A adapter? That hole will allow fluid to enter the tailhousing cavity for no reason I could see. The tail housing is quite large, requiring extra fluid

I need to make my own adapter to go from my 2006 R151F (Aussie) trans to my doubled RF1A boxes. I could buy this adapter maybe, possibly some day, when? So this brings me to the large excuse I’ve used about my glacially paced engine swap, trans adapter is unobtainable. The adapter need would be a V6 4.0 Manual (A60?) to RF1A or so I thought. Calling a shop that dead with lots of transmissions said they think I need the 3.4 Manual despite my trans being from a 2006 and definitely an R series trans. Anyhow none of this matters except all these adapters are back ordered for sometime now. Bored? So I’ll build my own with some help from a friend at a machine shop.
Scanned tailhousing and an existing adapter I had for the RF1A side. Working on bolt alignment and clocking.
Cheers

That’s where the damn seal goes. That “cup” goes in there with rtv around the edge. The seal gets installed in the cup. The input shaft seals on the seal. This isn’t exactly rocket science. These fucking things have been around 20 years.

Haha, I should have attached a better image than the drawing I made from the scans. Circled in blue was what I was referring too.
Cheers

Ahhh. That’s a little better. Not sure what that is for.

I wonder if that's a leftover from that oddball marlin seal from back in the early 2000s that just pressed up against the trans adapter. That hole allowed fluid to go back into the case and not fill up that cavity and blow out all over. A "we always done it this way" thing??? I remember my first set of duals I built in 2008 inchworm was better than marlin because Jim figured out how to seal it correctly. A few years later marlin switched over to the same setup Jim was using and probably called it the ultimate eco seal 2.0 and took credit for it

That's me just guessing though. I never bought into the whole "use the tail shaft housing as a fluid tank" concept. All my dual cases up to and including my mc07/lefty current setup vent fluid all over when you overfilled them, nothing went into that cavity

Thanks for the replies.
When I look at other adapters for the RF1A it seems that if the adapter is going onto an auto trans the hole is not present. My adapter was from my 88 V6, bought in 2010ish.
I wonder if the hole helps circulate oil over the bearing. If you separate an RF1A from a w or r series trans, there is no barrier to stop oil from washing through the bottom open bearing into the trans tailhousing. I’m not too keen on using the tailhousing as a fluid tank for no particular reason.

I dont have that hole on my v6 to geardrive AA adapter, and its an older one. 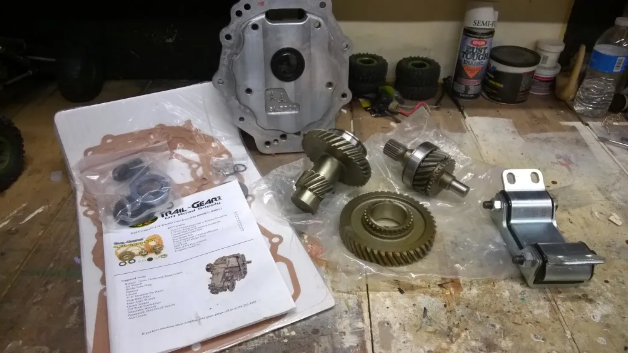 thanks, I also notice some plates are more complicated like yours. I mean, it was milled from a thicker piece and has a bit more material in the center. Where my Inchworm is a flat 1/2” thick plate. I’m thinking I may delete the hole.

rattlewagon said:
I dont have that hole on my v6 to geardrive AA adapter, and its an older one.

Yea you have the hole, right at the bottom of that center bump out.

Here's my 2010 inchworm adapter for reference. 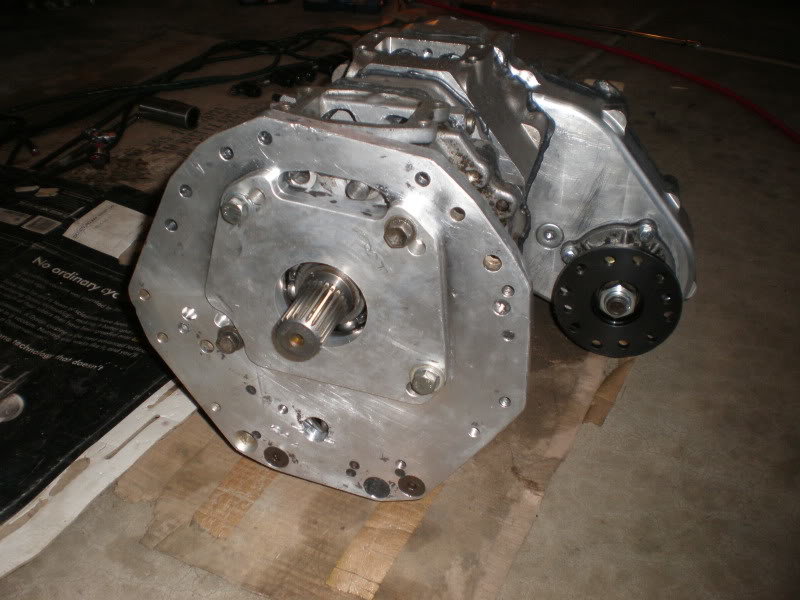 I say build it without one and if/when it blows up we will all takes notes.

Huh, Well I probably have a tail housing full of fluid too. haha. Guess ill check it out more closely next time Im in there.
Last edited: Jan 4, 2022

if I block the hole what happens? I burn up some bearings? I might take the chance. My rig gets driven to and from the trails, so if it’s going to starve bearings for oil, many hours of highway driving should test that theory out. Wish we had a definitive answer

The more I stare at this CAD file I’m drawing I seem to recall a conversation about the transfer case input shaft has a tendency to slowly pump fluid forward into the tailhousing cavity. Perhaps the hole at the bottom is to allow the fluid back into the trans case? I may be imagining this whole thing.

I just was staring at this a couple nights ago on mine. I remember being skeptical when I first put it together a couple years ago and thinking that tailhousing void would be full of gear oil all the time... It seemed mostly dry though and cases weren't asking for any more gear oil than usual. The two bottom holes are placed so there's BARELY a sealing surface between the adapter and the trans. Weird. 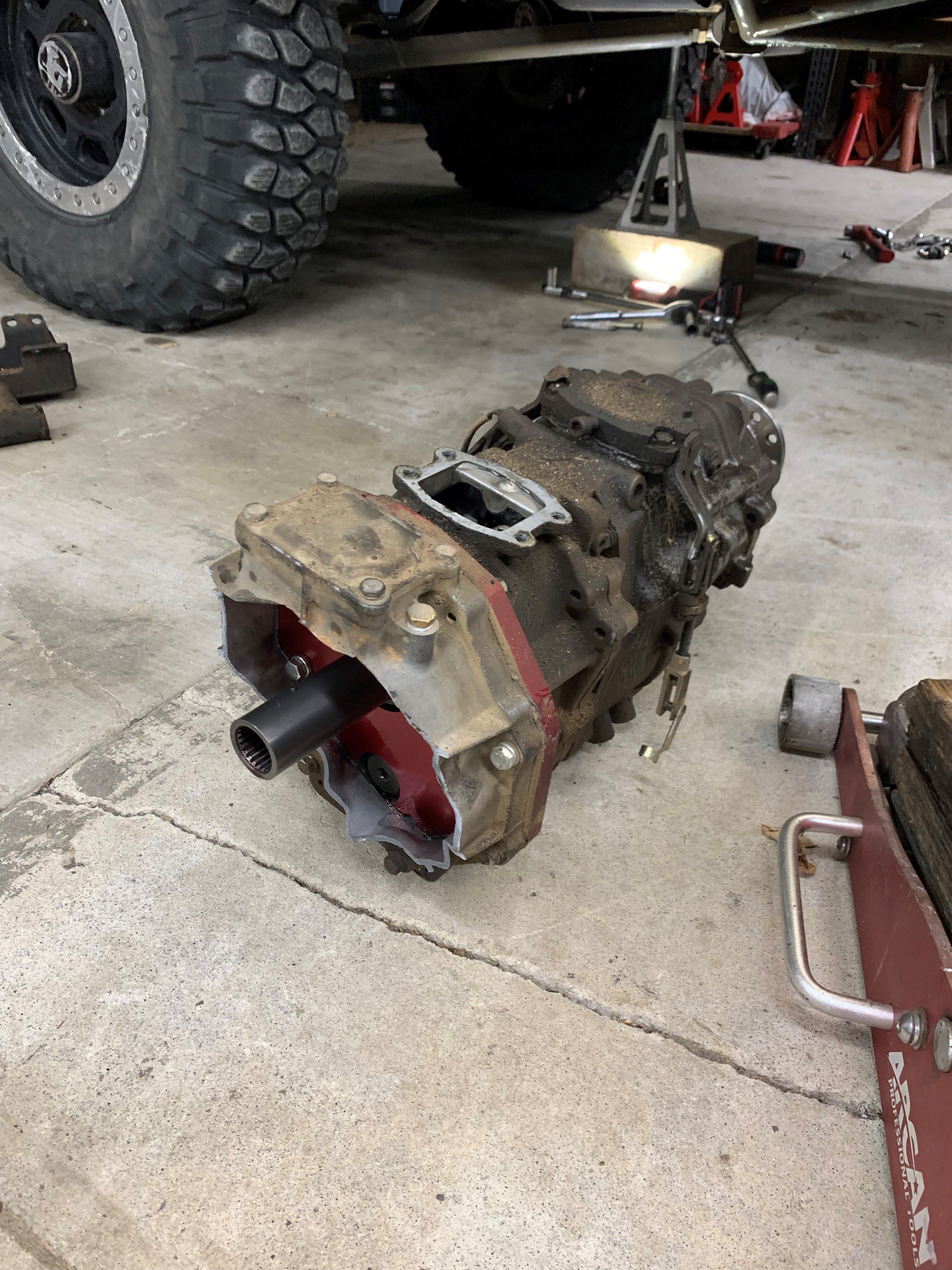 Rbx said:
The more I stare at this CAD file I’m drawing I seem to recall a conversation about the transfer case input shaft has a tendency to slowly pump fluid forward into the tailhousing cavity. Perhaps the hole at the bottom is to allow the fluid back into the trans case? I may be imagining this whole thing.
Click to expand...