Time for my update

took my cylinder heads to the machine shop, they are not totally busted. Going to cost about 400 to set them back to true.
But I know the block isn’t happy so I pulled the engine over the weekend, got the engine and trans separated after work today

Yup, having a service truck with a crane at your disposal sure does suck.

400 to fix the heads isn't a bad price either. Sure beats buying a new set.

SLOWPOKE693 said:
Yup, having a service truck with a crane at your disposal sure does suck.

400 to fix the heads isn't a bad price either. Sure beats buying a new set.
Click to expand...

For sure, i dont drive mine everday but i went up to the shop on saturday to rebuild a steering ram for a tractorm (my dad broke it) then took my truck down and installed the ram and thought what the hell ill pull that engine real quick.

Ill admit, being spoiled with the truck makes it real hard to do anything without it..

And for sure, fe engines the aftermarket options are real expensive, like 700 bucks a head.

Me and the guy i bought the 68 and two engines off of where arguing about which engine is better. My engine in 67 came with 208 hp on a 2 barrel carb. The 400 is 158hp on a 2 barrel. i really hope this block is good cause i really dont want to use either of those 400m engines

dang, didn't know you had brought this build thread over to here

cool to see the progress continue!

Did not tear the block down today.

Combined with I fought a 6.7 cummins today, and fought a cm876 regen issue and i was over engines lol

Tore it down to the rotating assembly. It might have jumped time and allowed me to bend the pushrods

i tore it down to a bare block today. all the bearings were worn through the out layer and into the copper, i had 3 spun connecting rod bearings. The crank looks good but those rod journals are chooted

maybe...maybe i should have pulled the distributor and primed the oil system before i fired it up after sitting for 27 years? Shit i changed the oil on it in 2007 so oil hadnt poured of the rockers in 12 year either...Learning things yall

noticed some odd machining, that i have head baout before, on the main bearing journals. They just didnt give a fuck back then huh?

the cam was...ok one lobe was roaded down but it didnt correlate with a hole with another damage. the thrust plate was held in with phillips head screws both mostly rounded already.

It goes to the machine shop tomorrow. And we will go from there. 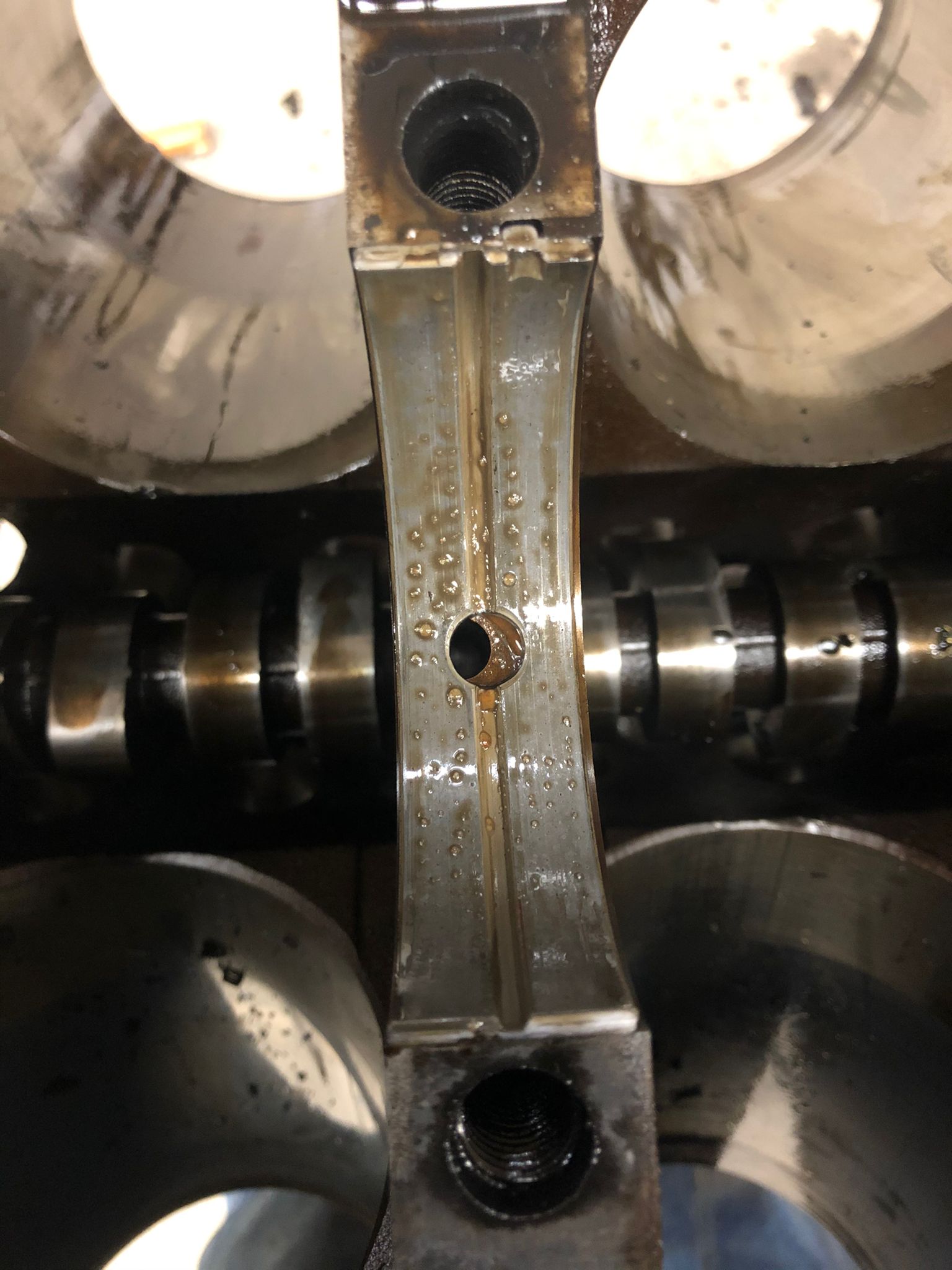 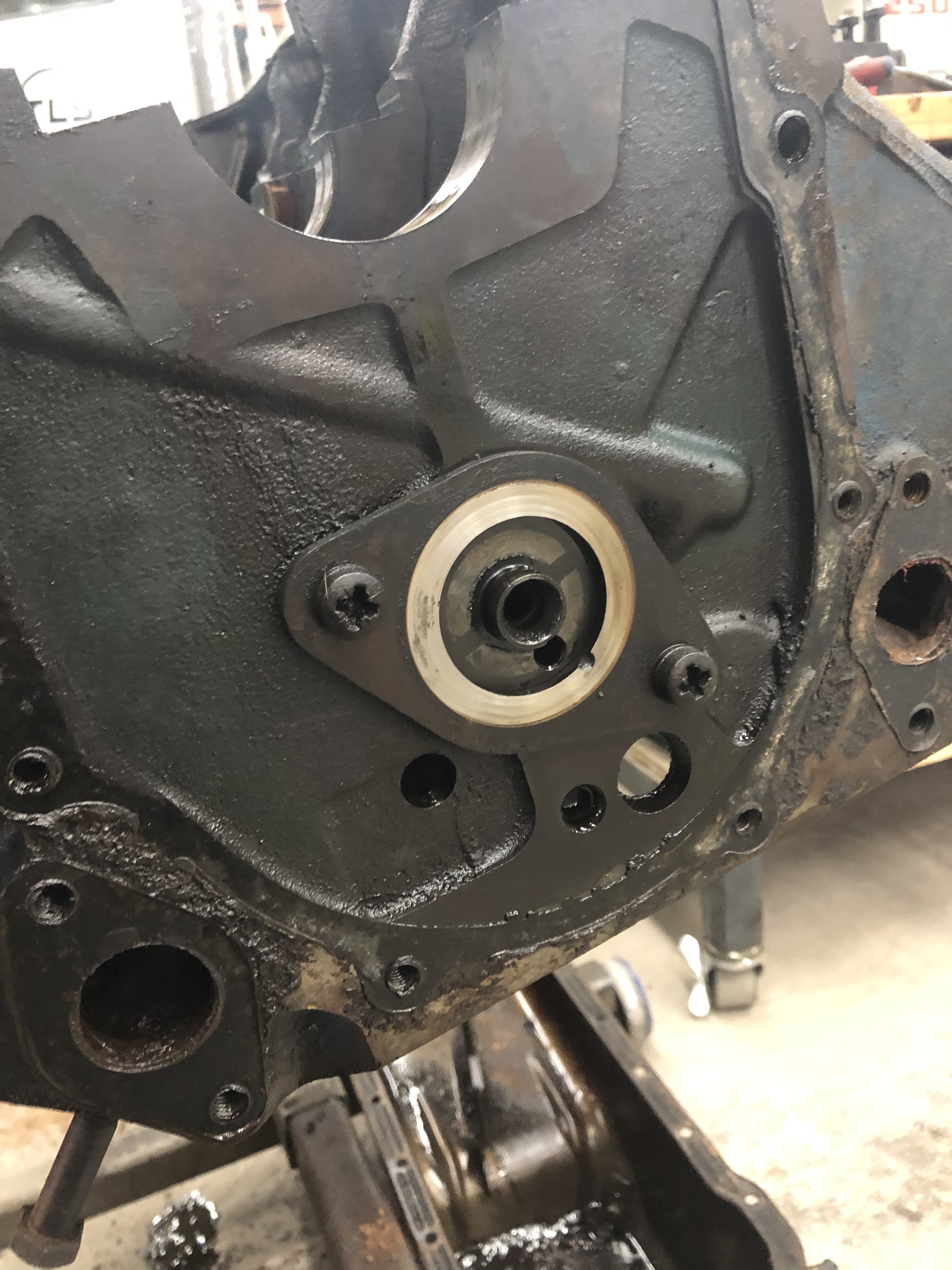 Machine shop called me today, it was already bores 30 over. Cylinders need cleaned up from rusting. They are gonna try 40 over and if it doesn’t work going to 60 over.
Block deck, block boiled and shot blasted. 700$

pistons are about 170$ heads need work about 300 worth rods bearing and other misc shit. I’d say I’m gonna be into it for about 1500

or for 1500 on top of the 1000 in block and head machining I can make it a 445 stroker.
Since my long game is to use a turbo I’ll stick with basic machining

my compression ratio will be about 9:1 perfect for keeping it together and probably make about 450hp or so.

I did find a 428 up in Iowa for about 1200 bucks but the condition is unknown other than what seller says and the parts in that size hold a value that make it SIGNIFICANTLY more expensive
Last edited: Apr 29, 2021

A_G said:
I did not weld that brake rod..my dad did when he was in HS and yea i did just reinstlal it until i can find another one. Intake photo is because the coolant bypass on my intake is rusted really bad and for 40 bucks i didnt need to drill and tap mine...
Click to expand...

I have stock booster with mc off my 68 2wd F250 you can have if you pay for shipping.

update. engine is still in the machine shop because up until now i dont need to get it out. i have been accumlating parts. but now my hand has been forced. We are moving shops at work and i would like to take my stuff out of all the shit we are moving. everyone has a home project parts strapped down to pallets but its gone on too long. So hopefully end of this month early next month the engine will be back together.

In the mean time i scored a dana 60 front and rear for free. My thoughts is the very much so rougher 68 would fulfill my child hood redneck dreams of a "highboy" even though its not and its the wrong year range. The parts i want from that truck are not going to make inoperable and for what i want to do wont matter. and that truck is not inhabited by my dad or my siblings, i can do what ever the fuck i want.

I should have the 67 on the road in early november. and then ill move on to cab sheet metal, radio ac ..turbos if i feel like it still, TBI EFI around christmas and then thatll be done other than paint.

forgot to add. Im going to run a 390 crank, 352 bored over 60, cant remember rod length at the moment. Should put me around 400ci. Stock heads, 4 barrel intake. Gonna do the oil mods
You must log in or register to reply here.
Share:
Facebook Reddit Email Share Link