What's up Irate, This is the project I've got going that's going to be getting the most of my attention over the winter, so I figured I'd post up before I got too far ahead and lost motivation to take pictures and stuff. Current goal here is to catalog building out an older bike to be competitive with more modern bikes in the Woods/tech/singletrack hare scramble series local to me, and give the dirt bike guys some YZ250 tech to browse through.

Background:
I've done nothing but build bikes out for desert riding my entire life, but after a season of racing my heavy tank of a deserted out YZ450 in tight singletrack hare scramble races, I figured I'd go out on a limb and try something a little bit different. I wanted a brand new KTM 250XC TPI, but go on ahead and ask me how easy it is to get ahold of one of those right now. 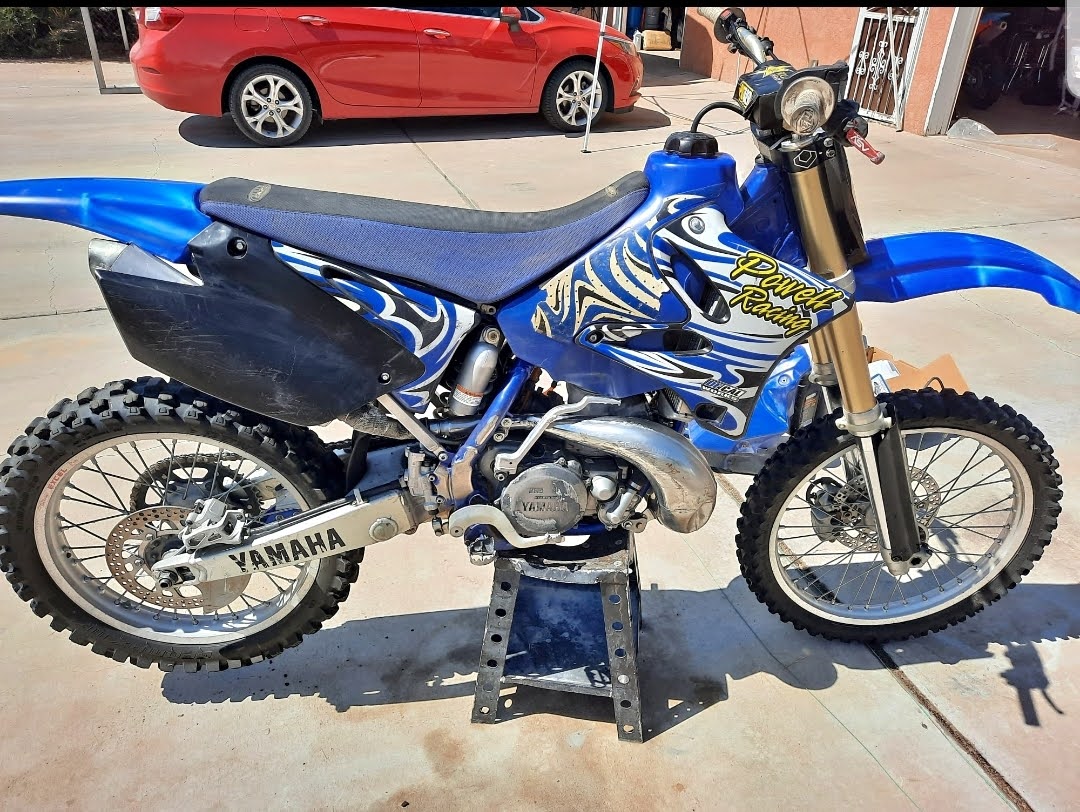 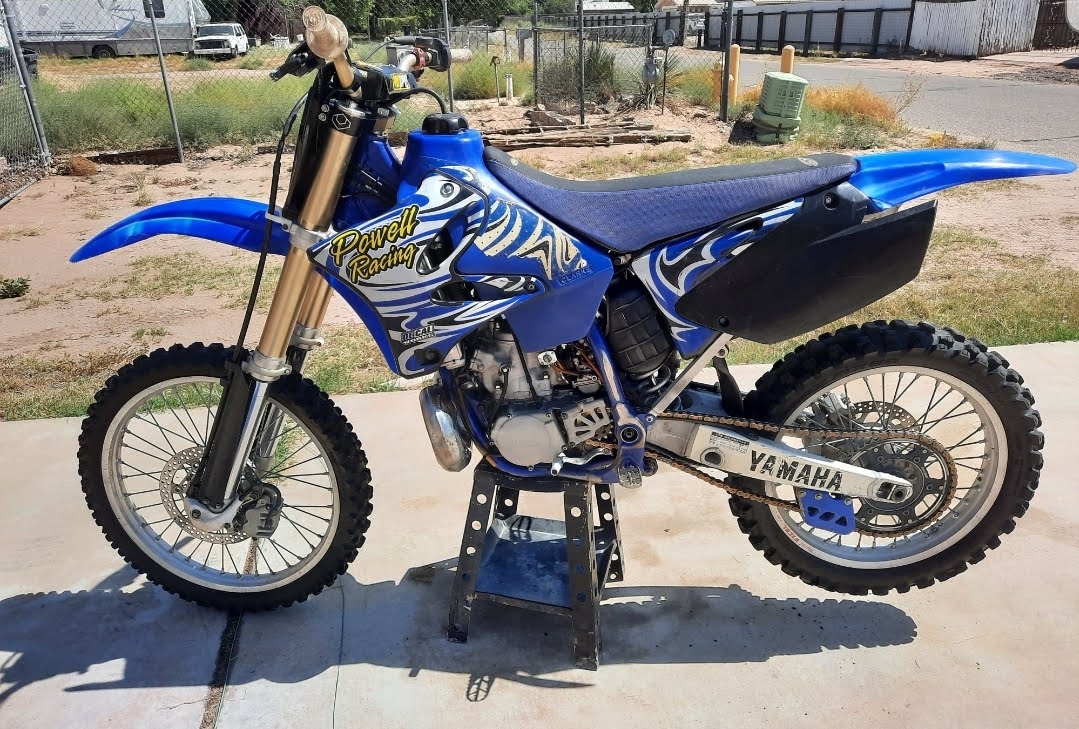 And it came with some spare plastics and other goodies. 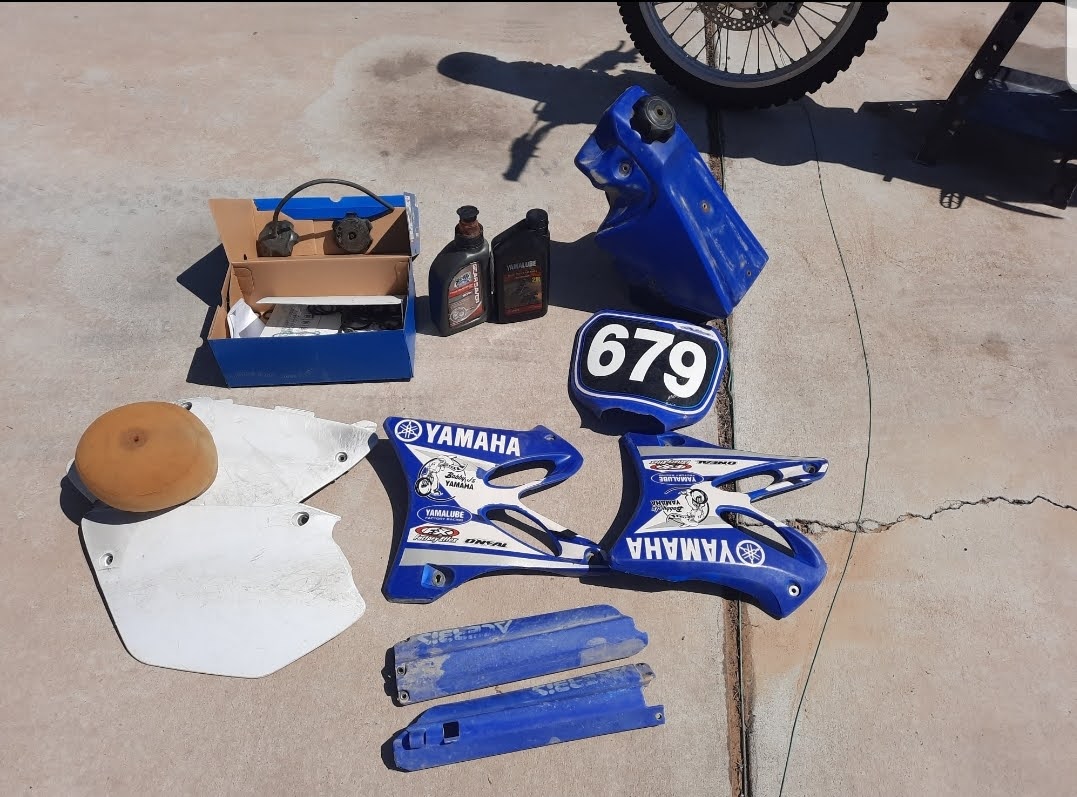 (This bike wouldn't have been worth a penny more than $1500 two years ago. Fuck Covid prices.)

Anyway being that it was cheap, I starting dicking with it immediately. It had stock sea level jetting in it for some reason (50/175, needle clip 2nd from bottom).
Being that I ride this thing only in the range of 4500ft-9500ft, I got to work on that right quick.

Current settings sit at (40/168, needle clip 2nd from top)
That cleaned up a lot of spooge and woke the thing right up, particularly off the pipe. This setting runs nice and clean at 4500-5500ft, might be a hair on the lean side.

Other mods included swapping out the plastics to the spares that I got with the bike, bending the mounts on the silencer back into a reasonable position, and swapping out the sopping wet air filter that was leaking filter oil all over the swing arm and air box. (Sorry, pics of that whole process didn't happen)

Up next: Fork swap

Next, I rolled my 08 YZ250f over to my space to be vultured. (That's right folks, KYB SSS fork Swap)
Now, SSS swaps onto steel framed/Older YZs isn't a new thing, and a few other threads exist about it in different places. But a bunch of those guys are stupid and their threads are stupid and wrong.

YZ250 Tech incoming:
The '04 YZ250 is considered the best of the steel framed bikes, because it's the only year that they ever came with 48mm forks. This means that the job of swapping more modern SSS forks onto them can be as simple as sliding the 04 forks out, and sliding the newer forks right back in their place and carrying on about your business. In theory this will work fine. The only issue you might run into here is whether or not the 04 axle interfaces with the SSS fork lugs, however I have no reason to believe that the axles measurements are different other than overall length.

Now, I didn't go that route because the top triple clamp the bike came with was some chinesium garbage that had worn out bar mount bushings I couldn't find replacements for. So I had the bright idea to just swap over the top triple clamp only from the 250f and call it a day. This has been done before on other forum threads. THIS IS THE WRONG WAY TO GO.
One of the two main differences between modern triple clamps and the 04s are the measurements between the fork bores. THE NEWER TRIPLE CLAMPS HAVE A WIDER FORK SEPARATION THAT STEEL FRAMED BIKES. If you swap only the top triple clamp and leave the existing 04 bottom clamp in place, your forks will have an inward bias, like this: \ / . This manifests itself in the axle not sliding all the way into the fork lug. Some people just run it that way, others cut down the hub spacers to correct the problem. The latter is a band aid and those people didn't bother to notice the root of the actual problem. This method should be avoided if you care about proper fork function and longevity of bushings and seals.

So, after that discovery, I decided to just throw the entire 250f front end onto the smoker. This was a better choice for a couple of reasons, including a wheel/hub package with a lot fewer hours on it, and a way better front brake system. This reveals the other measurement problem between the two bikes.
THE HEAD TUBE ON THE STEELIE IS LONGER THAN THE NEWER BIKES.
Meaning, the steering stem from the 08 didn't quite reach all the way up through the upper bearing to mount the upper triple. Here's the difference in steering stem lengths: I solved the problem by swapping the steering stems between the two lower triples. These can just be pressed out on any regular bearing press. Here's the lower triples next to each other. The raw Al one is the 04 and the bronzy looking one is the 08: 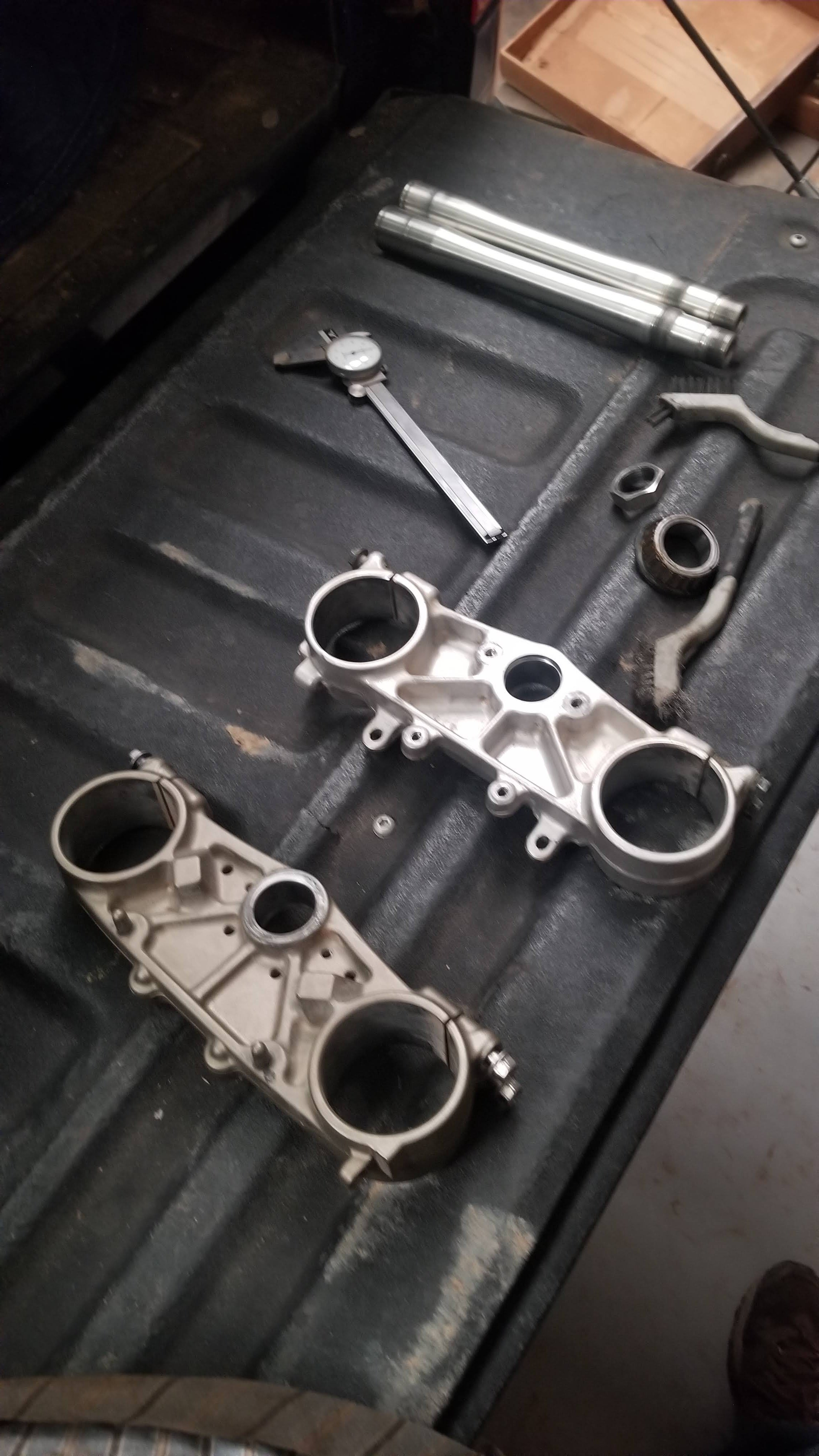 After that, it's just a normal reassembly of the front end. Here's how the finished product came out on the bike: 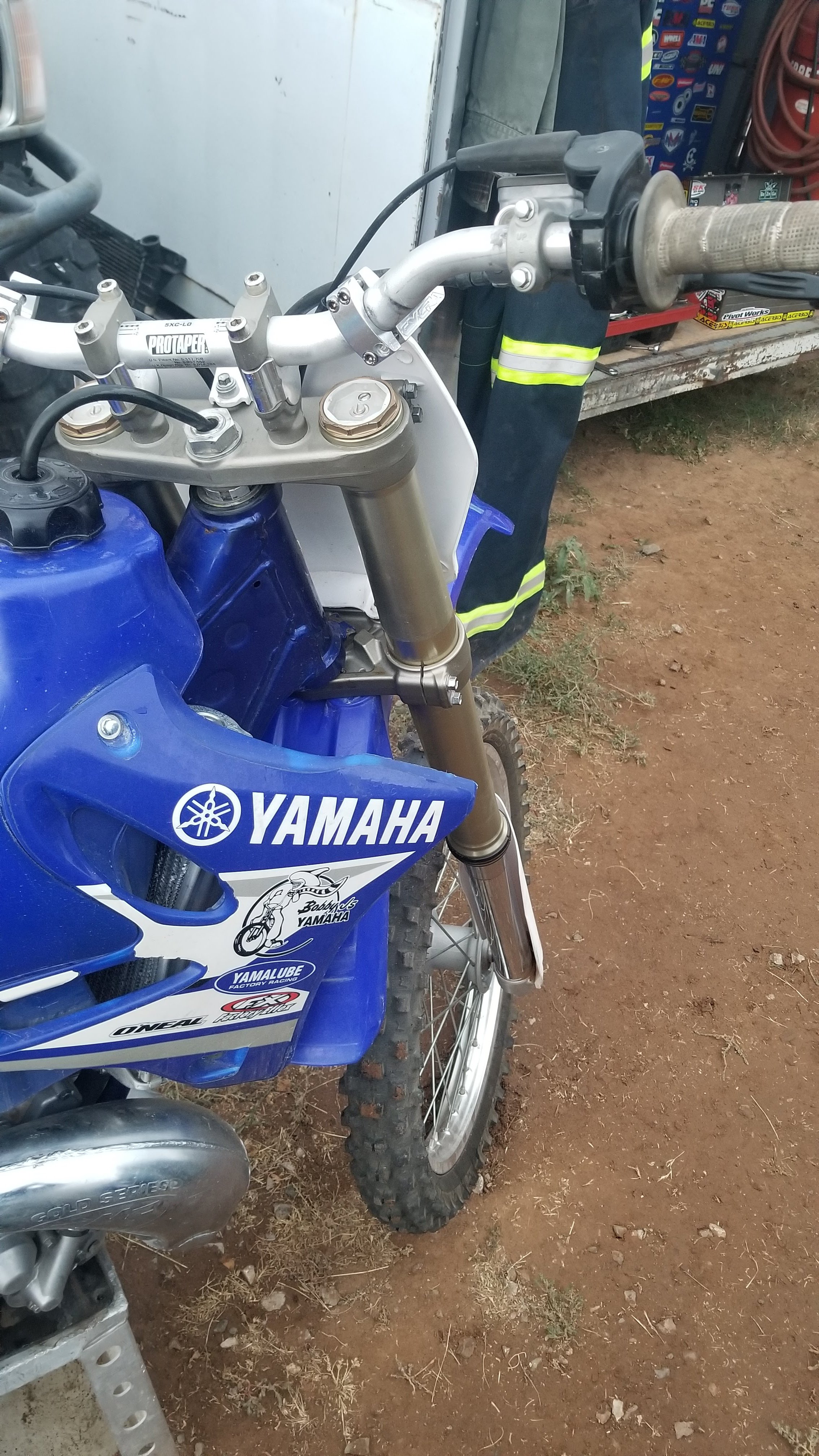 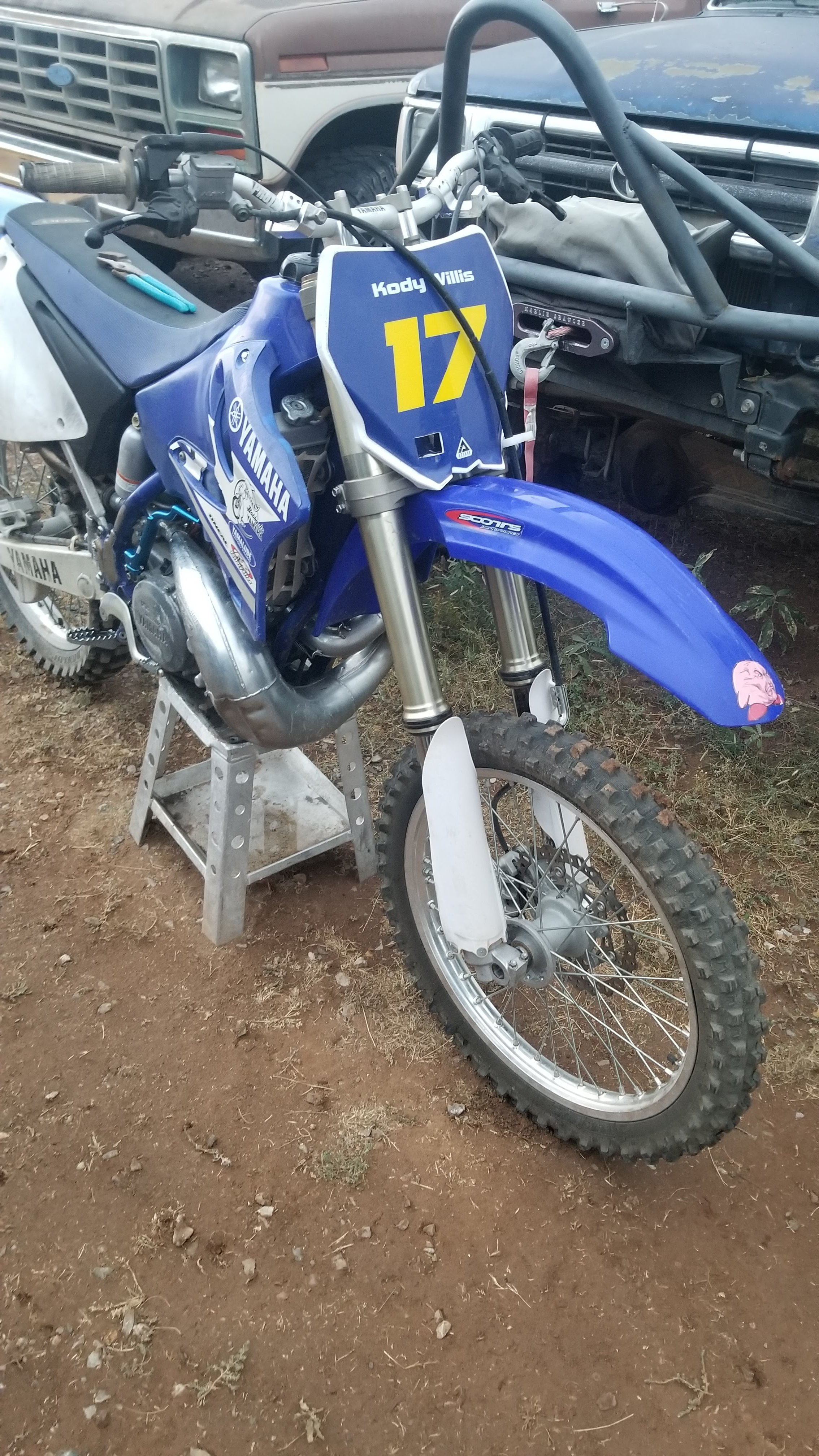 With all that stuff done I took it a few miles south for a shakedown with a couple of friends. It did amazing, Being a little bit undersprung for me made it feel crazy plush in the enduro rock trails we were running, and this thing makes as much off-pipe torque as most of the 300s I've ridden. Helluva bike so far. More to come. 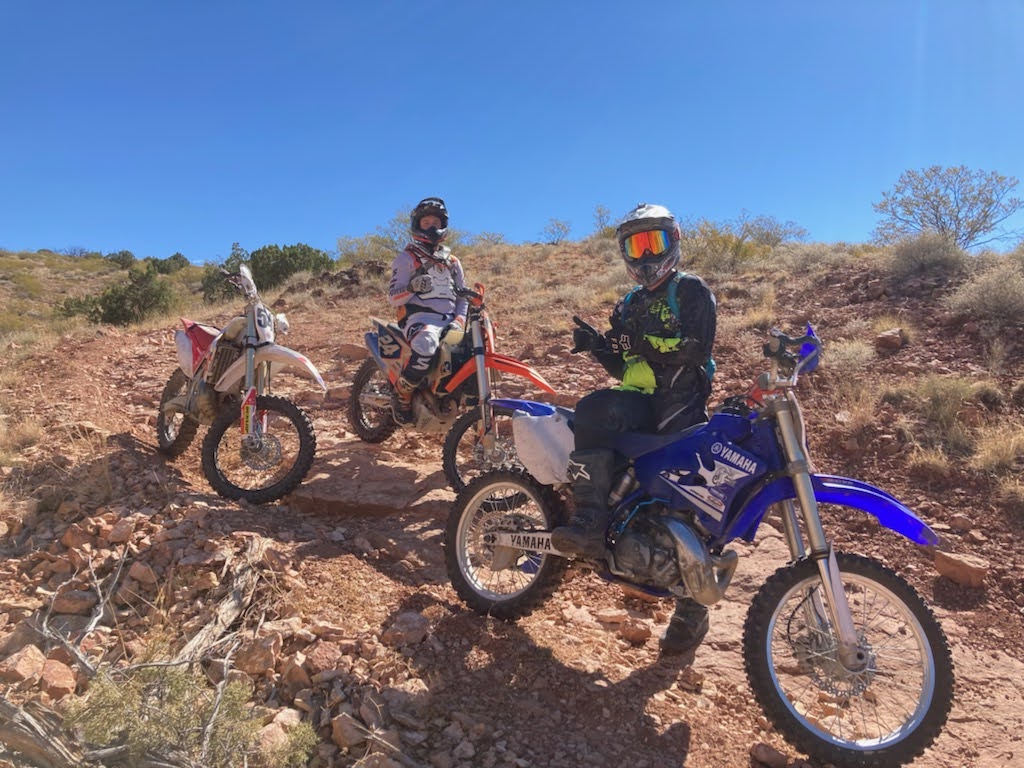 (we stopped here to gawk at a wild tarantula in the road. Shit was pretty cool.)

I had an 03 WR250F that I did the SSS fork swap to. I feel like I had used 06/07 parts and the steering stem was the proper length. Maybe a difference between 2 and 4 stroke frames or the 08+ parts? Either way, easy enough fix.

Gots_a_sol said:
Maybe a difference between 2 and 4 stroke frames or the 08+ parts? Either way, easy enough fix.
Click to expand...

That very well could be. The Al frame 2 strokes might also have longer head tubes as well, I'd have to measure.

yo you need trees to have a woods

I might have a GYTR flywheel kicking around if you want to try it out.
Last edited: Nov 19, 2021

I love a 250 2-stroke in the woods. I had a 2000 or 2001 KTM SX I added a flywheel weight to and it had an FMF gnarly pipe. I set the power valve to open almost immediately and jetted it slightly fat on the low end.

The thing was a tractor and could chug up tricky climbs at 1/2 of idle RPM. Mid range and top end it was jetted spot on but there was no power valve hit to get you. You could run it a year high and cruise around everywhere being lazy, or downshift and let it rip.

Only major problem with KTM’s of that era weren’t really fond of turning.

I don't think you can go wrong with a SSS fork

Scotts Performance Products
I put one on my bike, worth it if you ask me

Ebs said:
yo you need trees to have a woods

I might have a GYTR flywheel kicking around if you want to try it out.
Click to expand...

We don't exactly have PNW type shit here but we definitely got trees.

I have never tried nor ever had the desire to try a flywheel weight but if it's on a borrow basis I might take you up on that. I should check to make sure it doesn't already have one though because damn can this thing chug.

SomeGuyFromOlympia said:
I don't think you can go wrong with a SSS fork

Scotts Performance Products
I put one on my bike, worth it if you ask me
Click to expand...

I run them on my 450 race bikes and absolutely refuse to ever go back. The amount of arm pump and energy I save by not having to death grip my bars in chop and braking bumps is amazing.

I have a spare mount I'm probably going to modify and run on this bike, but I'm not sure how high on the priority list another $350 damper is. I have a lot of parts to buy for this build as it stands.
Last edited: Nov 22, 2021

During that ride doing some hard enduro trails and rock hopping around, the bike started blowing coolant out of the overflow tube, despite seemingly not overheating. Once it started, it never stopped. I knew that the radiators it had on it were complete trash, and prices on nice Mylers radiators are starting to feel like a real gouge. So I took to ebay and bought a set of super chinese turds for ~$80 as well as some sketchy $13 silicone hoses. The radiators despite wack ass cut and weld quality in some spots, are dead on the money, bolted up perfect and don't leak. The hoses not so much. One hose was an inch too long and another was an inch too short. Whatever, I kinda figured that would happen when shit gets that cheap. Still made them work. 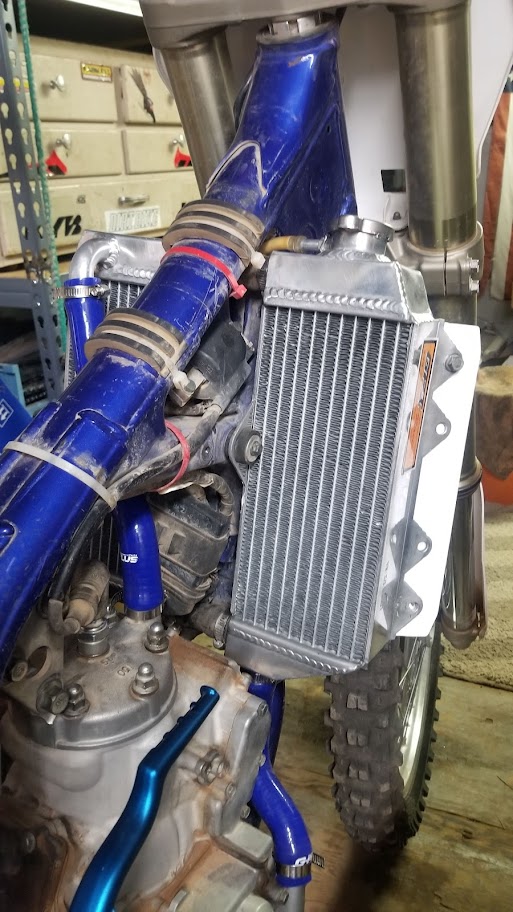 Problem is the radiators aren't the fix for the issue. When running, this bike has air bubbles coming up out of the coolant like crazy. It's getting combustion pressure in the system somewhere. I put some new O-rings in the head to try and fix that problem.

In other news, I haven't been a huge fan of the exxon valdez 3.9 gallon tank. It looks dorky as shit and I really have no use for it, as I don't plan on desert racing this bike. So i ordered up a smaller Acerbis 3.2g tank with a dual petcock setup. I like the look of this one a hell of a lot more.
This is how the bike stands as of tonight. 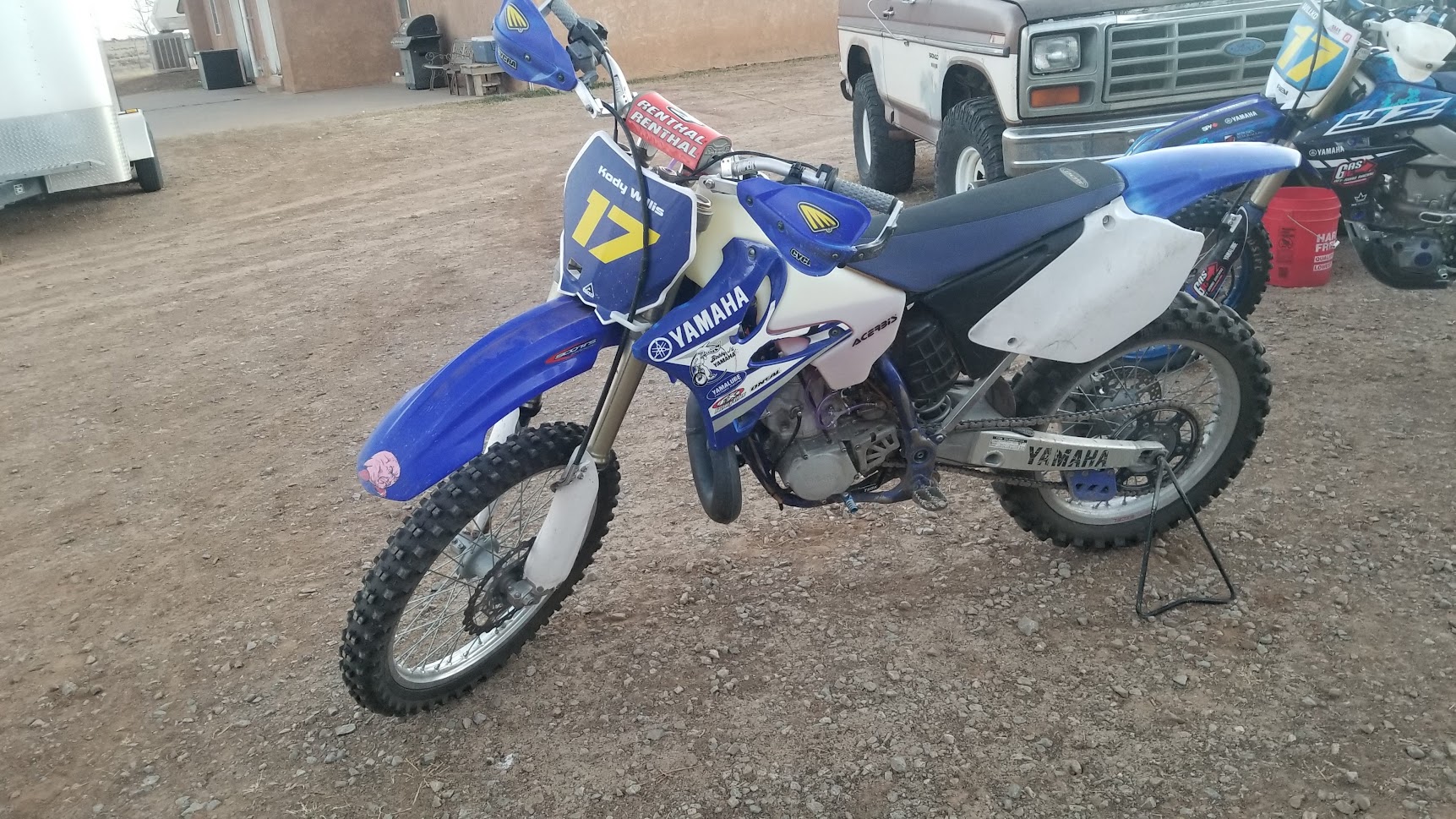 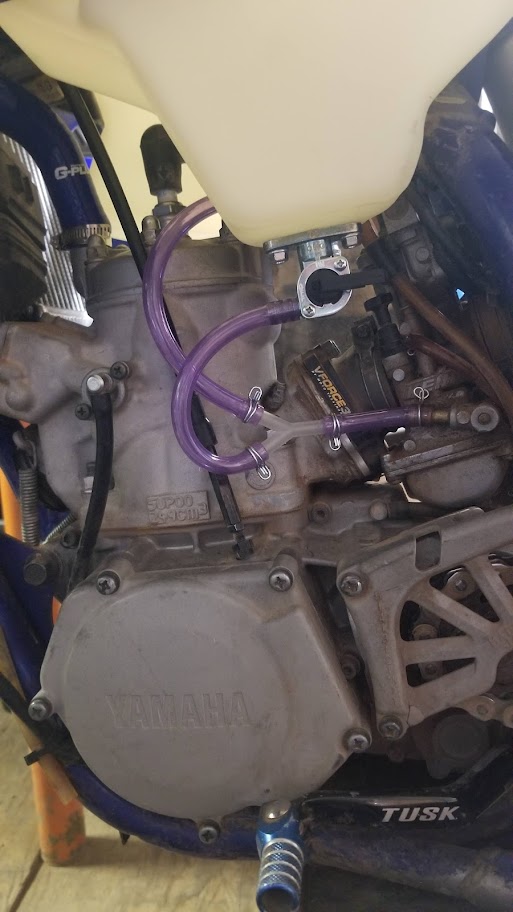 Note: Black pipe is a 250x loaner from a friend while he fixes the dents and de-carbons the SST a little bit. Also put some new pipe mounts on it while I had it off.

Quick sundown test ride tonight revealed that head o ring change didn't fix the coolant burping issue. Coolant still foams and sounds fizzy. Going to try a full top end disassembly this time and check the base gasket as well as checking the head and jug for flatness. Should've done that the first time but I was in a hurry.

This takes me back. I ran hare scrambles for many years on an 06 YZ250. I had issues with blown head O-rings too typically after I would over heat. I had a pretty simple setup. FMF gnarley pipe, Vforce reeds, 13oz flywheel weight, and typical hare scramble setup stuff like oversize tank, hand guards, and a scotts stabalizer. I loved that bike and it always treated me really well.